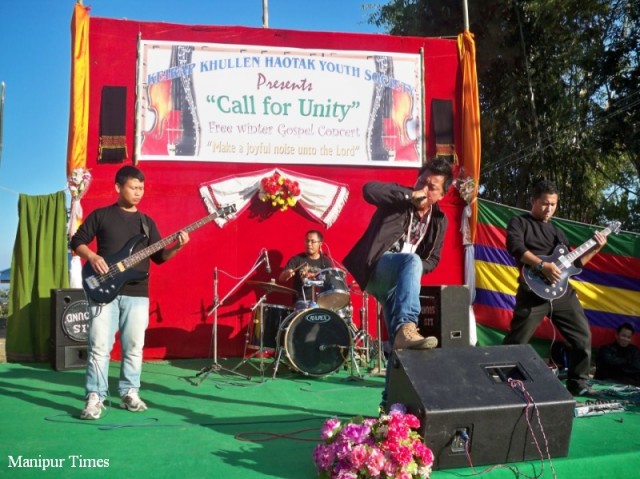 He took up singing and playing guitar as a career right after his Graduation. However, James Riamei started singing in the church and school when he was just 14. James as always an enthusiast of singing wanted to sing and perform on stage and other competitions, and stood first most of the time.

During his school days, James along with some of his friends formed a small time band in the school.

His father Rapanlung Riamei is a social worker and his mother’s name is Abonliu Riamei. They are very supportive to James Riamei’s passion. James and his family live in Guigailong, Grace Colony, Tarung, Imphal.

In the year 2008, he joined the band ‘IIIrd Chapter’. He is also a lead vocalist in ‘Inxhale’.  James Riamei is also a choir member of the Rongmei Naga Baptist Association (RNBA) Centre Church Choir for more than 10 years and is still singing for RNBA Choir.

James spent half of his time indoor writing lyrics, composing songs and practising. James has performed in nearly 1000 shows.

Now, James is busy in composing songs for an up-coming album under his directorship. 10 artists will perform in the album.

Writing and composing songs are all James do these days. He is a writer and composer. The project began in January this year, and is expected to complete by 2014. He needs more time because this project is bigger comparing to his past ventures. Moreover, this time, he wants to do something different.

Different artists are being engaged in the project and need to spend more time because putting and setting them together into one album will not be very easy as it thought.

As his profession takes him on James Riamei also participated different shows, concerts and competitions. He is the winner of the The Sur Sangam North East Musical Reality Show 2012 in western category.

“The happiest moment in my life was the day I won the (solo) competition in Sur Sangam North East Musical Reality Show”, James said.

‘I am proud to represent our State, Manipur and I have showed them what I have contributed for my people’, said James.

His band performs at Classic Hotel almost every weekend. “We all have our talent; one or the other, and everyone can live by it but one must correctly identify our talent that lives on us.”

It is always good to go little extreme sometimes if it is for a good reason. To be successful in music is quite difficult if we don’t have anybody to guide us, James said.

Pursuing success and popularity in western music in Manipur is little hard as people mostly listen to Hindustani music.

Systems, instruments and recording systems are not modern like other parts of the country. Although most people listen to Hindustani music in Manipur, James Riamei is trying hard to find fame in western music.

He was a finalist contestant in the Highway Star Voice Hunt Solo Competition 2010 (Nagaland), won 1 st Runner Up in group competition and best vocalist in Manipur Rock Fest in 2011, Winner of Phobiax, (under the theme battle of the band) which was held at Guwahati with his Band IIIrd Chapter in 2011, Winner in western category (solo) in Sur Sangam North East Musical Reality Show in the year 2011, also participated in Hornbill National Rock Contest with his Band IIIrd Chapter in the year 2012. IIIrd Chapter, Inxhale are nationally known bands now.

He has also got some offers for acting in films from Rongmei film directors and producers but he refused because he doesn’t like to mix up his profession.

“I don’t like to be an actor; singing is my profession and I will stick to it. After all it’s my passion, James said.

When asked about his future plan, James said he is looking forward to opening a music store in Manipur so that he can help the upcoming generation who are interested in music.

His first video album – ‘Glorify Your Name’ was released in the year 2011. The album was directed by him.

James is now looking forward to producing something bigger this time. Some songs are composed and ready for recording. James is working hard on his new project but refused to reveal the title of his new album.

Some songs in his albums are based on social-evil (like politics) but most of the songs come from his own experience and composed by himself.

His bobbies are listening to all kinds of music, sports, singing. His role model is Mr. Big.

– You raise me up

– I‘d rather have Jesus

other recorded songs; Fragile heart of mine, your choice, etc.