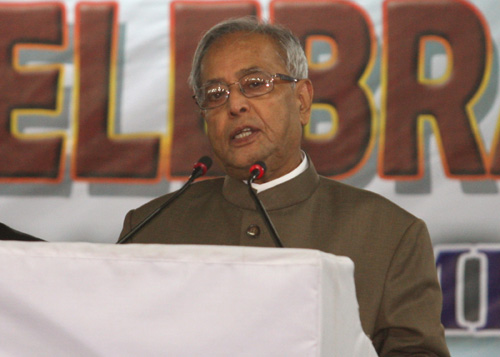 1. I am pleased to join you for the Diamond Jubilee Celebrations of the Adimjati Shiksha Ashram, a revered institution devoted to the welfare and development of the tribal community in Manipur. I feel honoured to be at this Ashram whose foundation was laid in 1953 by our country’s first President, Dr. Rajendra Prasad. I am particularly happy that Mr. Rishang Keishing, who has been a Member of Parliament since the first Lok Sabha in 1952 is the Chief Patron of this Ashram and is here with us today.

2. The initiative of this Ashram for the upliftment of poor tribal children was started due to the untiring efforts of Late Shri Deshbandhu Adhikari, a scholar and social worker from Uttar Pradesh. He was a great protagonist of national integration. He started this institution and movement for bringing education, skills and vocational training to the tribal people of Manipur. Overcoming all odds, a residential Hindi School was established in 1952 to provide free education to the poor tribal students.

3. Ladies and Gentlemen, Manipur has always had a special place in the mind of all Indians. In the history of our struggle against colonialism, the King of Manipur was amongst the last to surrender to the British. The spirit of independence and sovereignty was never extinguished in Manipur. Manipur was the first place liberated from the British by the Indian National Army led by Netaji Subash Chandra Bose. A large number of the early generation national leaders like the first Speaker GV Mavalankar, Rajkumari Amrit Kaur, Sardar Govind Ballabh Pant have visited this Ashram. Manipur should also pride itself on having had leaders who made profound contribution to India’s Independence movement such as Bir Tikendrajit Singh and Rani Gaidinliu.

4. I have visited Manipur several times in the past and am very happy to be here now. The Adimjati Shiksha Ashram has done relentless work for the upliftment of the underprivileged and the deprived. This Ashram has been a forerunner of many initiatives in this State such as conducting training in weaving and tailoring, undertaking tours for promotion of co-curricular activities, Anganwadi training, and running crèche centres.

5. This Ashram has also been the pioneer of technical education in Manipur. It is distinguished for having established a technical institute in 1956 for imparting technical education to the tribal students of the North Eastern States. I am told that this Institute, now run by the Government of Manipur and known as the Government Polytechnic, teaches diploma courses in all mainstream engineering disciplines.

6. The Adimjati Shiksha Ashram has been instrumental in implementing a scheme of 1976 for Hindi training, by deputing tribal children to the Hindi Vidya Pith in Bihar. I am told that the 150 students who had undertaken this programme were appointed in Government schools. This is a laudable effort towards national integration and should inspire us all.

7. Institutions are the strength of society and civilization. They build a strong foundation of democracy. The Ashram is an excellent institution which helps build the values necessary for a knowledge society.

8. The objective of freedom for India was never a mere transfer of power. Jawaharlal Nehru after the Lahore Congress of 1930 described the concept of Purna Swaraj as meaning freedom from political slavery, economic bondage and cultural stagnation, not just a change of rulers. This idea was instituted into the Constitution of India by Nehru and Dr BR Ambedkar. The Indian Constitution has been described as a magna carta for socio-economic transformation. The Directive Principles of the Constitution embody these ideas. We still have some distance to go in achieving these goals. Today’s development paradigm is no longer ‘trickle down’. Instead, it is empowerment backed by entitlement. That is why the Government has introduced the Right to Information, MGNREGA, Right to Education etc.

9. All of us will have to contribute to achieving the socio-economic transformation of India. Many parts of the north east have not got the full benefit of the process of development that was initiated through our five year plans. This deficiency should be made up through collective effort and contribution.

10. On the occasion of the Diamond Jubilee Celebration, I am happy to unveil the Diamond Jubilee Monument, and inaugurate the Girls Hostel and the Amity Hall. I am hopeful of these new infrastructures serving the good purpose that it is intended to. I am also honoured to lay the foundation for the construction of a working women’s hostel and a tribal boys’ hostel. I look forward to their speedy completion.

11. I am confident that the Adimjati Shiksha Ashram will carry on its journey of limitless devotion and continue to be the centre of love, peace and harmony for all. I congratulate the Ashram for completing 60 years of valuable service. I also wish them all success in their future endeavours.