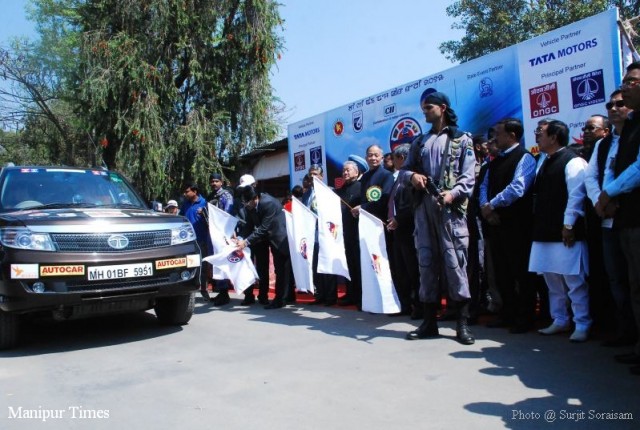 I am extremely happy to meet the participants of the BCIM Car Rally today. The Ministry of External Affairs, Govt. of India has now taken several initiatives towards the implementation of the look east policy. This car rally being organised by the Confederation of Indian Industry under the aegis of the Govt. of India will bring the people living in the region closer. The historical ties and links among the people will be revived now. We see a lot of similarities in the culture and traditions of the people living in the region. We also share a common heritage.

Recognizing the need and importance of inter – dependence among the people in their efforts to realise the dreams of development, it is imperative to open the available channels of transport and communication among the people. The restrictions in the movement of goods and service and people across the border need to be eased.

We are also keen to improve the connectivity with our neighbour s, namely Bangladesh, Myanmar and China. The Asian Highways No.1 and 2 pass through Imphal and they span across the Asia connecting countries in the East Asia and West Asia. It will not be far from now when people can move freely across borders with the ease of restriction and improvement of highways.

As a first step towards easing of restrictions, the Ministry of External Affairs, Government of India has decided to provide the facility of Visa on arrival at Moreh for the Myanmarese Citizens in order to visit India especially Manipur to get health care facilities in India. The Visa arrangement with Bangladesh and China may also be eased so that travel between India and its neighbour become easier. We are looking at the opening up of road and rail passages to Bangladesh through Tripura so that our goods can be exported by using the ports of Bangladesh.

My State, Manipur is known for its achievement in International Games & Sports. Mary Kom from Manipur won Bronze Medal at the last Olympic Games held and Gold Medallist at Common wealth Games as well as Asian Games. Even though small in size, Manipur is the powerhouse of games and sports. The game of polo has its origin in Manipur. During the nineteenth century, the British learnt the game from Manipuris and popularised it across the world.

I am sure you enjoyed the cultural programmes presented by the artists of Manipur yesterday. Our State is also endowed with natural beauty and temperate climate. It is aptly described as the “ a little paradise on earth” or the “ Jewel of India. Our hospitality combined with the rich cultural heritage and scenic beauty gives an opportunity for development of tourism infrastructure. The natural resources in the form of oil and gas, minerals, fruits and vegetables, aromatic plants etc. can be exploited for setting up new industries. Our handloom and handicraft products are known for intricate designs and beauty. My state Manipur produces soft and lustrous silk, unique in its own way. All four varieties of silk, muga, eri, mulberry, and oak Tasar are produced in the state. We will be in a position to export Manipuri silk to the neighbouring countries in the near future.

I really appreciate the combine efforts of government of India, State government and confederation of Indian industries to make this rally a success. I wish the participants of the BCIM Car Rally a safe and pleasant passage right up to the final destination Kunming in China. We also hope that we will take with you the fond memory of Manipur with you.