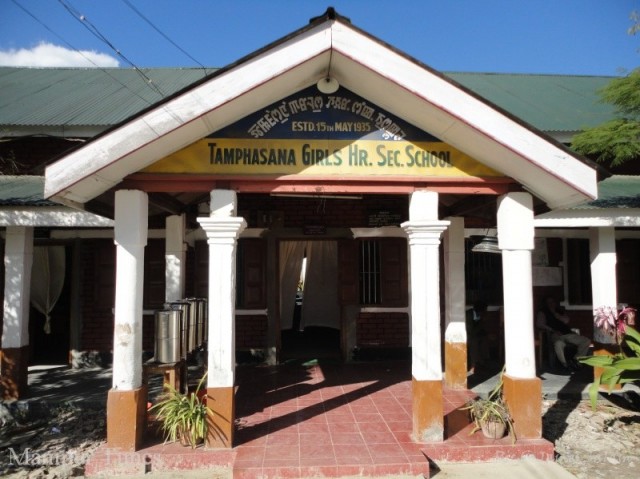 “Every time a Government school or college perform well and achieve something, the accolade is shared between the school and the State Government. So the Government needs to pay special attention to its premier institutes.”

She said that T.G. Higher Secondary being one of the best Government schools of Manipur has produced a number of professionals, doctors, engineers, bureaucrats till now.

In the academic session of 2012-2013, a total of 1385 students were enrolled in class XI in this school. Out of these, 500 students are in Arts Stream, 70 students are in Commerce Stream and 815 students is Science Stream, the Principal said.

However the number of students enrolled in class XI for all the streams are 568 in the previous session.

This shows that the number of students enrolled in the academic session 2012- 2013 is more than the double of the previous session.

Including the 568 students of class XII who were enrolled last year, there are 1953 students in this school.

The actual intake capacity of the school is 500 students but it can manage up to 600 students.

But due to the sudden increase of number of students, the school is facing lot of problems in the current academic session.

Although the number of the students has increased, the infrastructure of the school as of now has not been improved.

In spite of all the shortcomings, the teachers have arranged temporary classrooms by separating big rooms in two to three smaller rooms which can accommodate one hundred students. There are eight sections in XI Science having 100 students in each section.

In the Arts Stream of the same class, there are five sections of 100 students each. Commerce Stream having the least number of students has only one section.

Citing the reason for academic excellence of the school, the Principal said that the school generally conducts a written test to select brilliant students at the time of admission. The teachers of the school give special attention to their students and teach the students with dedication. All the teachers of this school are very hardworking and dutiful. Moreover, school timing starts half an hour earlier than other schools. The teachers also extend their working hour and give tutorial classes if required.

As a result of all these efforts, the pass percentage of the school exceeds the expectation every year.

The Principal is optimistic that some students from Arts and Commerce streams may bag positions in top 10 in the class XII examination conducted by the Council of Higher Secondary School, Manipur.

In the Science Stream as well, maximum number of students passed in first and second division in the past examinations. The school also sometimes produce position holders.

In the current session no written test was conducted at the time of admission and all the students who acquired admission forms were enrolled in the school.

Admission forms were issued to all the students who secured 50% in aggregate in the High School Leaving Certificate Examination last year.

The teachers are putting in serious efforts to get good results this year as well, she added.

Teachers give valuable speech every day during assembly in order to polish the moral of the students. Besides this, mobile is strictly prohibited inside the school campus. Even if students carry mobile phones in special cases they have to deposit it to the Principal with a piece of paper writing their name, class and roll number.

At present, there are about 121 teachers in this school including 56 ‘utilized’ teachers and ‘part time’ teachers. In the last session there were 65 teachers.

Pramodini said that this school is the most important asset of the Government of Manipur.

So, the Government must give special attention to this school. As of now, the school has no common room. The library of the school is also very small and it is not proportionate to the number of students.

As such, students are seen loitering in the campus due to limited capacity inside the library.

She also requested the Government of Manipur to build the much needed classrooms to avoid the inconvenience being faced by the school.