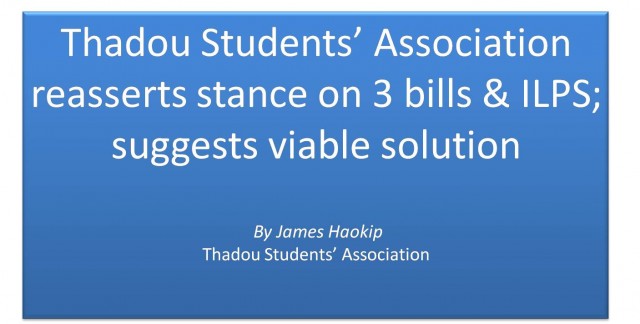 Considering the current political and social environment in Manipur against the backdrop of the passing of the 3 bills – the Protection of Manipur People Bill, 2015, the Manipur Land Revenue and Land Reforms (Seventh Amendment) Bill, 2015, and the Manipur Shops and Establishments (Second Amendment) Bill, 2015 – by the Manipur Legislative Assembly on 31 August 2015, the Thadou Students’ Association – General Headquarters (TSA-GHQ) would like to reassert its stance on the issue and spell out the reasons in detail.

While TSA shares the concern of Inner Line Permit System (ILPS) supporters regarding the alarmingly fast growingstate’s demographic imbalance which indeed presents a grim situationand threatens the interests of the indigenous people of the state both in the valley and in the hills, it also has serious concerns regarding some of the clauses contained in the 3 bills that will potentially impinge upon tribal rights over their identity and land and their interests severely undermined once the bills are enacted to become law and implemented.

For example, clause 2(b) of the Protection of Manipur People Bill defines “Manipur People” as “Persons of Manipur whose names are in the National Register of Citizens, 1951, Census Report 1951 and Village Directory of 1951 and their descendants who have contributed collective social, cultural and economic life of Manipur.” Given the poor administrative and recording systems due to various reasons in the hills during the year 1951 which is only 4 years since India’s independence and 21 years before Manipur attained statehood in 1972, and also the fact that most of the tribals were illiterate, it is most likely that the names of most of the tribal people would not have been recorded in even one of them, let alone all of them. Even if they had been recorded, their descendants proving the relationship would be difficult. This means most of the tribals will be excluded from being “Manipur People” and treated as “outsiders” even in their own ancestral land and community. It is doubtful the tribal legislators who supported the bills would be safe either.

Further, the “Statement of Object and Reasons” in the bill referred to “Manipur” as “one of the small hill States in the North-Eastern region of India”. This has naturally led the tribals to suspect that the term “small hill” is used in reference to Manipur, which actually consists of the hills and the valley, with an intention to affect uniform land laws for the whole state of Manipur, without any exception to hill or tribal area, and also to legitimise the demand for Meiteis to be recognised as a scheduled tribe – a ploy to deprive the tribals of their rights over their land, identity and privileges.

The passing of the bills without duly consulting the tribals have cost 9 precious tribal lives (the tribal martyrs whose dead bodies are yet to be buried) who were killed while protesting against the bills and since then the protest movements for and against the bills spearheaded by the Joint Committee on Inner Line Permit System (JCILPS)and JAC Against Anti-Tribal Bills respectively have intensified on both sides, plunging the state into chaos and anarchy-like situation.

The State Government and supporters of the bills have repeatedly tried to dispel the apprehensions held by the tribals over certain clauses by saying that the bills will not in any way affect the hill or tribal area. However, this explanation has failed to convince the tribals because of certain reasons, such as clause 1(2) of the introduction to the Protection of Manipur People Bill, 2015 which states “It shall extend to the whole of the State of Manipur”. Statement of Objects and Reasons of the bill defines Manipur (State of Manipur) as covering both the hill and valley of the State. As the bill itself clearly states, clearly the bill covers the whole of the State of Manipur.

Clause 2 of the Manipur Land Revenue and Land Reforms (Seventh Amendment) Bill, 2015 provides for transfer of authority from District Commissioner to Manipur Legislative Assembly/Cabinet over sale of land in scheduled area in the hills. This essentially meansthat the fate of tribal land ownership or the rights of tribals over their land and resources will rest on the state or an authority dominated and controlled by the dominant community. This will enhance the power of the State Government to unduly interfere in tribal affairs. For this reason, among others, TSA is seriously concerned that the already marginalised and disadvantaged tribals due to reasons including, but not limited to, the Manipur Land Revenue and Land Reforms Act, 1960 which has already adversely affected tribal land ownership rights due to its applicability in some parts of hill districts, will be further marginalised and disadvantaged due to the new legislation.

Hence, TSA, as also ThadouInpi, Thadou Youth Association and Thadou Women’s Association, joining hands with other tribal organisations support the ongoing tribal movement spearheaded by JAC against anti-tribal bills and will continue to do so unwaveringly until the bills are withdrawn or unless the clauses that are against tribal interest are removed.

It is imperative that the Government of Manipur implements the 6th schedule of the constitution of India in tribal areas/hill districts of Manipur so that tribals can feel safe and secure living under the administration of Manipur Government, otherwise it will only exacerbate their concerns and the demand for an administration totally separate from Manipur will only gain popularity more and more among the tribals. The dominant community and the Government of Manipur must appreciate and support 6th schedule provisions to be implemented in tribal areas – this will in turn help securetribals’ support to the ILPS movement. We wish to urge the Government of Manipur to implement it sooner than later in the best interests of the tribalsand in promoting emotional and territorial integrity of the state.

TSA would like to fervently appeal the Government of Manipur as well as the Central Government against acting under the pressure of a particular community against the wishes of others. We also appeal the Government of Manipur and the Joint Committee on Inner Line Permit System (JCILPS) to either withdraw the anti-tribal bills or review and amend them such that they suit not only the interests of a particular community but of all indigenous communities of Manipur. Should this not occur soon,we wish to urge the Central Government to interveneimmediately to bring about an amicable solution and to restore normalcy in the state before it is too late.

The author is Secretary General of  Thadou Students’ Association