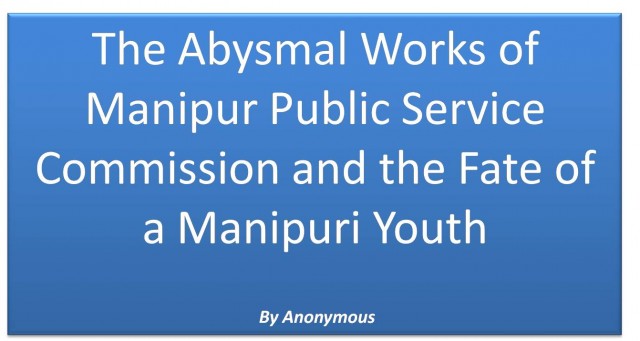 Supposed to be an esteemed body in the state, the Manipur Public Service Commission under the current chairmanship fails to command any credibility. By its own actions while conducting the recent Manipur Civil Services Combined Competitive (Preliminary) Examination, 2016 [MCSCC (P) E, 2016], it has exposed itself to be an extremely incompetent body.

The mistakes in the instructions of the question paper of MCSCC (P) Examination, 2016, because of which the Examination is cancelled, shows the utter carelessness and negligence on the part of the MPSC. It seems that a Class 10 student is more qualified than the members of MPSC who are handling the Examination. The mistakes could be identified by any person who can at least read basic sentences in English. The instructions could have been copied from elsewhere, most seemingly from UPSC CSE question papers, and MPSC edited it; and even in that MPSC failed.

The Government of Manipur should look into this matter seriously. The Commission should not continue to give excuses. It should have given due attention to the Examination which the Commission was already lacking.

It should be noted that the repeated cancellations of the Examination are also demoralising the youth of Manipur who are already negatively impacted by various forms of instabilities and crises in the state. These cancellations do not respect the time and effort of the students who are appearing in the examination. The hard work the students have dwelled upon has been utterly dishonoured by the Commission.

For students who are outside the state and belonging to economically backward classes, going to and fro between Manipur and their respective place of study frequently is a big burden. The infeasibility of land transport compels them to book costly flight tickets. The repeated cancellations of these examinations are without any consideration of these students; it could only be done by persons who do not have a vision of an inclusive society and by this very nature incompetent to be a civil servant in a society like ours.

Now, I do not have any more money to buy flight tickets or train tickets. My economic resources have been exhausted. I belong to an economically backward family. No one in my family has a government or private job. We don’t have a large tract of land. I saved some money which the MPSC has wisely indirectly eaten up so that the likes of me can be slowly removed or discriminated from the elite service.

How can MPSC fail to see these things ahead? What is the vision of the Chairman and Members of MPSC for our society? While conducting the examinations, do they think of each and every class of the society? Do they think of the youth of the state and the problems they are facing? Or, do they think that their job is simply to get over with the examination? The MPSC needs to be more responsible and accountable.

This Examination matters to persons like me. To be honest, I need a stable job. But, more than that, I want to serve the people of my state. I am determined to do that. I want to be a part in building our society for the better. However, I will not be able to give the Examination this time. As already mentioned, there is no money left for me. I cannot afford to go to Manipur and appear in the examination now.

Dear members of MPSC, your incompetency has impacted the lives of thousands of youths of Manipur within and outside the state in a very morally, psychologically and financially negative way. You have also successfully excluded the likes of me who belong to lower economic strata from appearing in this examination.