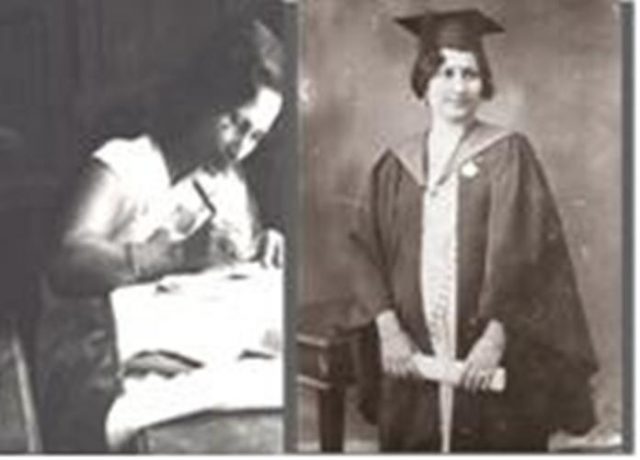 In this talk, I want to highlight three things, which I find it these albums/ collections: First, I want to discuss the presentation and representation of the life course (or life stages) of “the new woman.” The object of numerous reformist agendas and advice manuals, “the new woman” was also visualized as having a photographic life course not unlike that of a male. 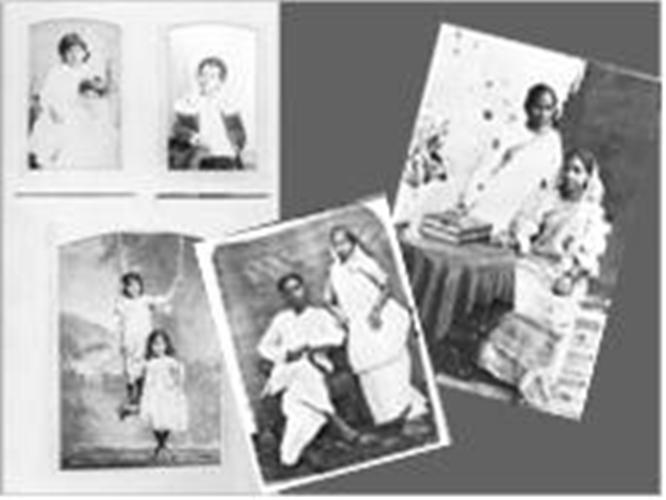 While the modern-traditional families photographed their sons from infancy through (slide 26 –has multiple frames: 1,2) childhood and schooling to sports (+3), higher studies (+4), jobs,(+5) and success (+6) their photos of girls remained limited to those life stages mentioned above – showing photo, marriage, family and old age. “Modern Progressive families” increasingly photographed their daughters from infancy, giving them a visual life much like that of their sons. 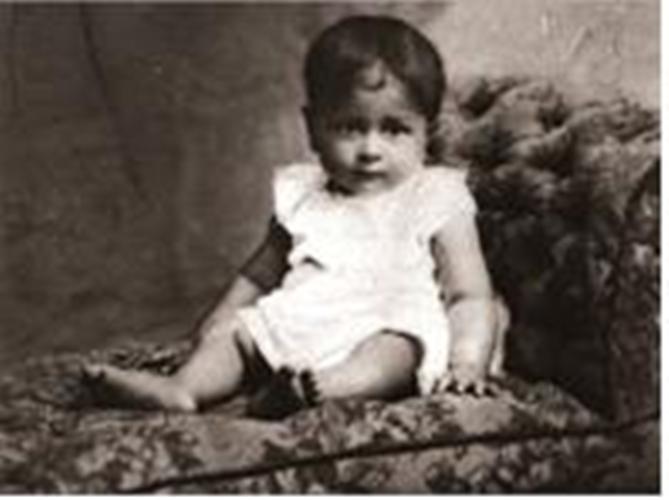 Kalyani Mukherjee (Mallik) (b. 1903) was the granddaughter of Bengal’s first woman novelist, and the great granddaughter of a famous reformer. Kalyani’s mother, Hiranmoyee, married to Mr. P. Mukherjee of the Indian Educational Service, had 14 children, only 3 survived. 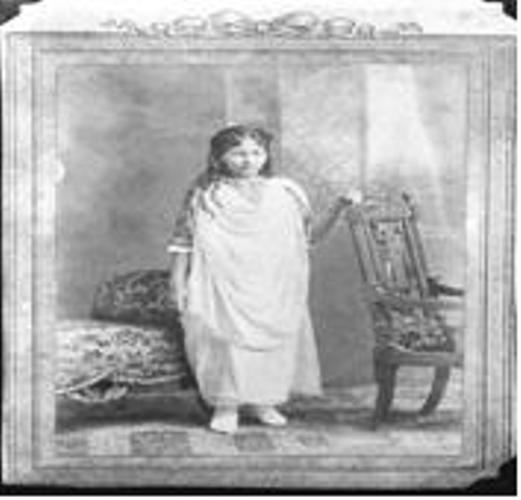 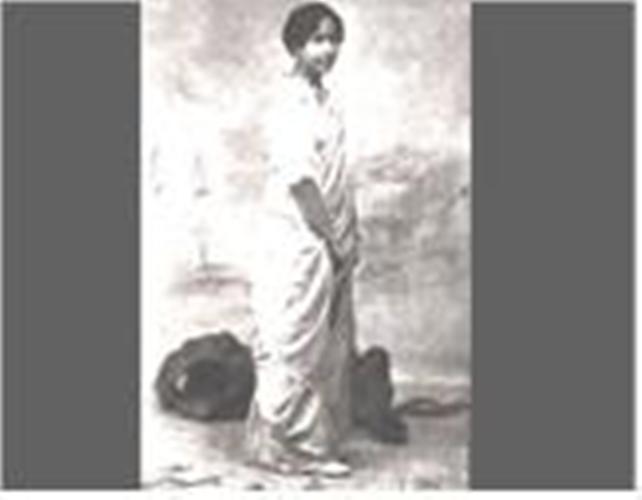 Kalyani attended an English-medium school. Her formal education began at age seven when she was sent to Diocesan Girls’ School in Calcutta. In 1916, her father became the Director of Public Instruction in the princely state of Indore. In Indore, Kalyani attended a Hindi-medium school and was tutored in music: sitar, violin, and singing, and sports: tennis, badminton, cycling, horseback riding, and shooting. Kalyani recalled that family members supervised all her private lessons. Kalyani attracted suitors. Her father was not opposed to the idea of her marrying young, but her mother refused. 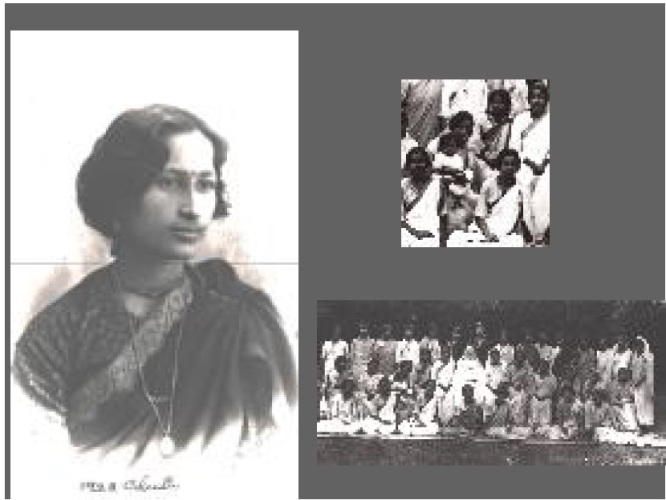 This posed photograph was taken at this time. Showing it to me, Kalyani said, “Look at that face! What a bold face for a young woman.” 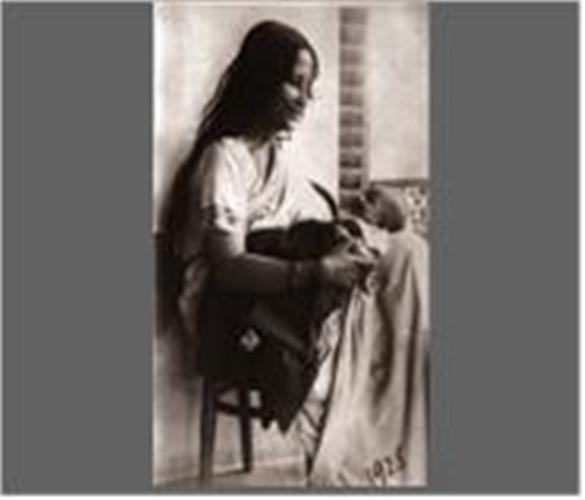 Kalyani entered Diocesan College where she studied Mathematics and in 1922 completed the intermediate exam, that is, she finished 2 years of the 3 year degree. In 1923, her father arranged her marriage to Ajit Nath Mallik, his colleague’s son who had graduated from Cambridge University in England. She continued her education but in 1924 had her first child – the first of seven. In 1924, she had her photo taken with the class – even though she had had to drop out — and in that photo, is shown holding her baby. 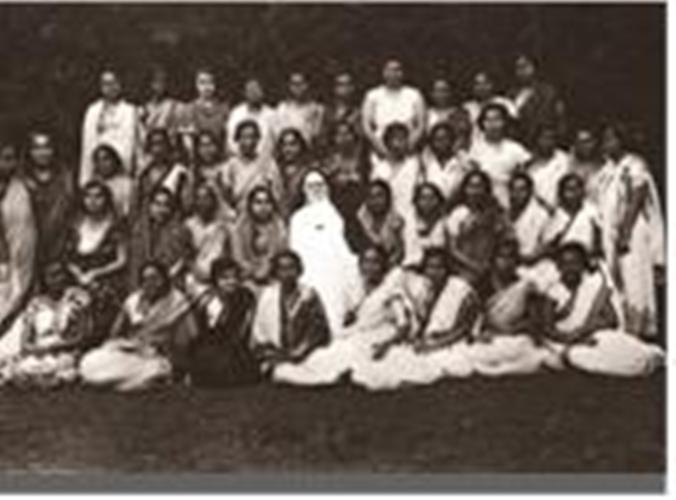 Kalyani had a total of seven children but she also continued her education. 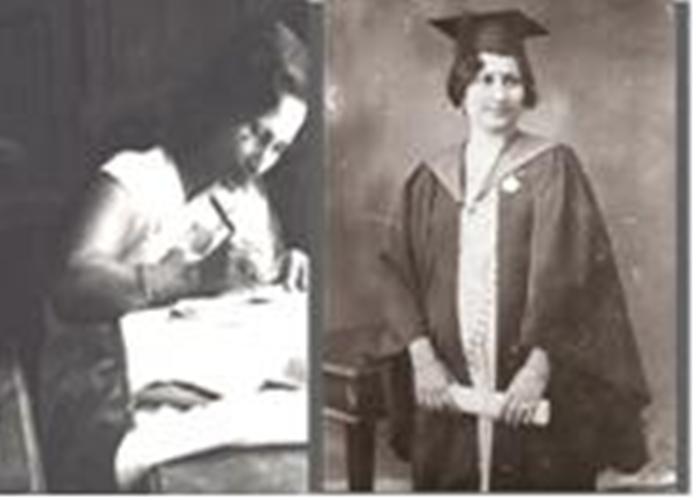 She received a Bachelors degree, a Teaching degree, a MA and eventually a Ph.D. Meanwhile, she raised six children. Her photo collection, which includes many class photos, mark her pursuit of education and also speak to issues of identity. In 1936, she completed her MA when she was the mother of 6 children. She then went on to complete a PhD and have her 7th child. Despite her elite family background, Kalyani was not protected from economic hardship. Her husband had a position in the Eastern Railways, but lost his job when she was expecting her third child. She had to take up a job. Despite her qualifications, she became a school teacher at Loreto School for girls.

Although this is only one example, it serves to illustrate the kind of visual life histories that were being constructed for women. Although we find that females were increasingly photographed in a far greater number of life stages than before, their visual life histories differed from those of men in two significant ways:
• the interruptions of child-bearing and nurturing
• lesser / smaller careers