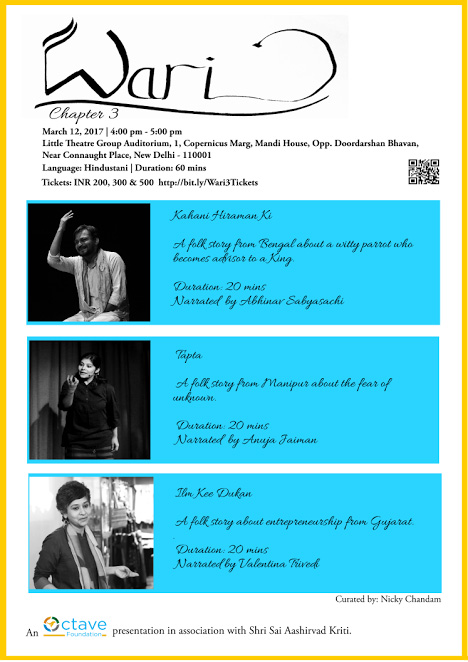 Rediscovering the art of storytelling for adults and children. One of its kind, curated show of fascinating stories translated and adapted from different times and cultures Narrated by Abhinav Sabyasachi, Anuja Jaiman and Valentina Trivedi.

Octave Foundation’s Wari started its journey in June 2016 and since then has reached over 12,000 people spanning across schools, literature festivals and curated shows. With the third edition, we bring three new stories from Manipur, Bengal and Gujarat.

Abhinav Sabyasachi is the founder of ‘Paltan’, a theatre and art group. He is originally from Bihar and has been doing extensive theatre with groups like IPTA, ‘Sansaptak’, Sehar Theatre Group. He has done plays in Hindi, Bengali, English, Maithili, Urdu and French. He also conducts theatre workshops. Abhinav is also a freelance journalist, writer, a published poet and a painter.

Anuja Jaiman is a Delhi based actor. Originally from Dehradun, she worked as a journalist for a decade in Delhi and Mumbai and is presently a communication and editorial freelance professional. She is pursuing theatre and exploring storytelling. In line with the vision of Wari, of which she is the co-founder, Anuja wishes to use theatre and storytelling as a conversation starter to reach people of all age groups.

Valentina Trivedi is a Teacher Educator and Storyteller who specializes in approaching the learning process from a child’s perspective. She has been a senior copywriter in advertising, a scriptwriter and director for TV shows and films, the Editor-in-Chief of the Doon School quarterly alumni magazine and a performance artist of Dastangoi – the ancient art form of Urdu storytelling. She enjoys writing in both Hindi and English and is currently developing picture books for children. She is also a co-founder at ‘Kaleidoscope’, an initiative that works to change the way learning is perceived and experienced by children and adults.

Nicky Chandam is an avid chronicler of arts through her photographs and words. Originally from Manipur, and based in Delhi since 2005, she is the Founder Director of Octave Foundation which aims to connect North Eastern India with the rest of India through the medium of art and cultural exchanges.

The Genesis: Growing up in a decade that has witnessed innumerable socio-political conflicts, the founders of the organization recognized that creative arts and performance arts transcend all boundaries by forming a language of their own. If we have to bring people together, we have to delve deeper into our roots and give platforms of convergence to celebrate ethnic diversities that build our cultural ethos. The more people get an exposure to cultures other than their own, the greater the inclusivity. It is not just about presenting an event, but to allow for meaningful interactions while at the same time supporting dying art forms by making them accessible to all. With that belief in mind, in 2015 Octave Foundation was formed to carry forward that vision through actionable goals.

Mission Statement: To build platforms for cultural interactions and centres for learning that promote and preserve diverse cultural heritage, and build inclusivity and encourage peaceful interactions between India’s North Eastern states with the rest of the country.