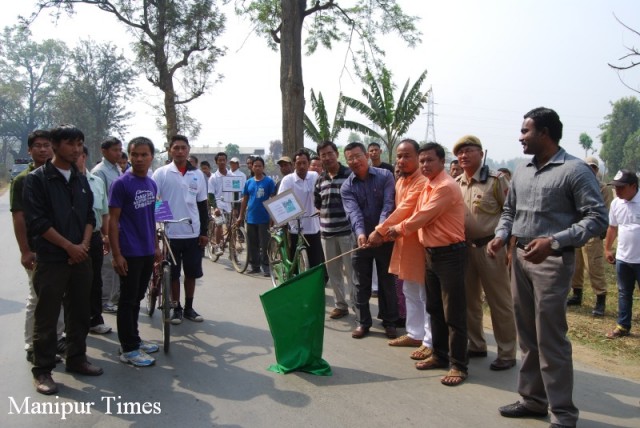 With placards and banners in hands that convey the message to save forest, a large number of boys and girls took out a cycle rally on the streets of greater Imphal on March 21, 2013 to mark the observance of International Day of Forest.

The mass cycle rally was organized by the Forest Department, Government of Manipur in collaboration with the local clubs of Irilbung area.

Participated by a large number of young boys and girls, particularly school children, the cycle rally was flagged off from the Irilbung High School ground  by Konthoujam Tombi Singh, Adhyaksha of Imphal East Zilla Parishad at 9 a.m.

The day was observed under the theme, ‘Save forest: Make our State green’.

About 300 boys and girls participated in the rally. They held placards that read as ‘Stop illegal  felling down of trees’, Stop setting ablaze of forest’, ‘Stop mining of forest land’, ‘Plant more trees to stop increasing global warming’ and ‘Stop killing of wild animals’ etc.

Before flagging off the rally, the rallyists observed silence for one minute pledging to safeguard forest, control global warming and climate change with the planting of more and more trees.

The rally participated by many students and youths from Keirao, Bamon Kampu, Kalika, Irilbung Machahal villages  passed through areas like Kongba Bazar, Ayangpali Road, Lamlong, Telipati, New Checkon, Palace Gate and Wangkhei Road before winding up at the starting point.

“The earth is the only planet on which human beings can survive because of its existence of hydrogen, oxygen etc while other planets are not fit for survival of living beings because of the shortage of many components required for living beings. However, we are destructing mother earth. Rampant felling down of trees for various human purposes has brought about drastic climate changes like irregular rainfall, global warming. Manipur too starts facing the impact of global climate change due to rampant felling down of trees. Public awareness on forest conservation and co-operation is the utmost need of the hour towards defending climate change”, said Th. Mahendra Pratap Singh, Chief Conservator of Forest.

The Chief Conservator of Forest added, “Observance of International Day of Forest is to remind all the people about the importance and benefits of forest to human kind and peoples’ participation with a view to protect forest. The observance was initially held as World Forestry Day since March 15, 1972. Forest is considered as the ‘lungs of the earth’. Every citizen should contribute something in checking devastation caused to the environment failing which human beings will have to face the consequences of global climate change. The responsibility of protection of environment doesn’t lie with the Government alone. Peoples’ participation is a must, added the forest official.

He further observed that planting more trees neutralizes carbon dioxide emission from various sectors. The once densely-forested Nongmaiching hill range now wears a barren look with each passing year as a result of rampant felling down of trees for timber and firewood as well as shifting plantation activities. Nearby locals have big role in the protection of forest trees in this hill range.”

“If the present phenomenon of climate change continues longer, all living beings including human populace will no longer be able to survive on this earth. Like the extinction of dinosaurs from the earth because of its inability to adapt the changing climate, human race too will extinct. If we wish to survive on this earth for longer, protection of environment through planting more trees is imperative”, observed K. Tombi Singh, Adhyaksha, Imphal East Zilla Parishad who took part in the occasion as chief guest.

He stressed on the immediate need for checking deforestation activities, including jhum cultivation and burning down of forests.

Pointing out that along with disturbing the ecological balance destruction caused to forests is harmful to the wildlife, he said that effective measures need to be worked out and implemented to save the environment.

The United Nations General Assembly second committee passed a draft resolution to designate 21st March each year as the International Day of Forest.

The Member States are encouraged to organize forest related activities including tree planting campaigns, public awareness regarding forest and environment conservation and many others. The Secretariat of United Nations Forum on forest is tasked with organizing the international day in collaboration with Governments, the collaborative partnerships on forest, the UN Food and Agricultural Organization and other international and regional groups.

Forests are the integral part of global sustainable development. According to World Bank estimates, more than 1.6 billion people depend on forests for their livelihoods with some 300 million living in them. The forest product industry is a source of economic growth and employment, with global forest products traded internationally is estimated at $327 billion.

According to the Forest Report, 2011 published by the Union Environment and Forest Ministry, over the last two years, Manipur lost 190 sq km of forest areas while Nagaland lost 146 sq km.