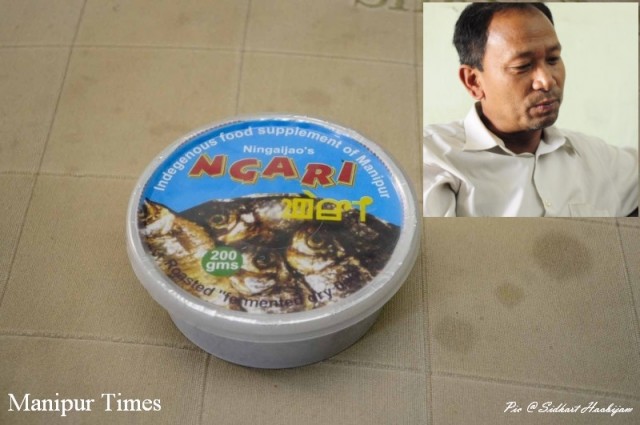 Though it may be a bit unpleasant to non-users, the smell of roasting ngari always sets the appetite glands of Manipuris on motion. The lip-smacking u-morok metpa with ngari, appetizing smell of kangsoi and tantalizing eronba are among the items which any Manipuri cannot resist.

Ngari (fermented fish) is an inseparable food item for the Manipuris. In fact, Manipuri taste is not complete without ngari.

Sensing the significance of ngari in Manipuri kitchens, Thoidingjam Ranjit, 52 s/o late Mangoljao of Khurai Thoidingjam Leikai, Imphal East has started producing packaged ngari under the brand name Ningaijao Foods for the ngari lovers of Manipur and outside.

Ranjit passed Matriculation from Lamlong High School in 1975 and PU from Imphal College. He is the youngest son among seven siblings of five brothers and two sisters.  He got married in 1985 and has now two daughters and a son.

His father was an employee of Manipur State Cooperative Bank. After the death of his father, the family suffered some financial problems. He tried to manage the family by working as a contractor. However, he left the profession after some time.

As ngari is a favourite food item in Manipur, he anticipated huge profit from ngari business. So, he began collecting dried fish (fabou nga) from the fish farmers living outside Manipur. He fermented the dried fishes to change it into ngari at his house. As an initial investment, he invested about Rs. 2 lakh.

Now, Ranjit has left fermentation works as well. Instead, he purchases ngari from other ngari manufacturers in terms of kharungs (earthen pots) and does packaging business. A kharung of ngari which weighs about 35 to 45 kg costs Rs. 10,000 to 15,000 in Manipur. The packaging materials are imported from Kolkata.

Though people of Manipur consume ngari as an essential and traditional food item since time immemorial, the raw material for making ngari i.e fabou nga (dried small fish) is mainly procured from Assam, Bangaladesh and others. This variety of fish is available in the lakes, rivers and ponds of Manipur. But it cannot meet the huge demand of ngari in Manipur.

“In view of the increasing demand of ngari from the Manipuris living outside, the idea of selling packaged ngari came to my mind as it would ensure comfortable handling and transportation. Ngari of Ningaijao Foods has now reached different parts of the globe where Manipuris are residing for studies and jobs. My business of packaged ngari mainly concentrated to the Manipuris residing outside (Manipur)”, says Ranjit.

At present, ngari packs are distributed to different shops at wholesale rate. Ngari packs are now available in the shops located at North AOC, Sagolband Meino Leirak, Yumnam Leikai, Churachandpur and others.

In an exclusive interview with Manipur Times, he said that initially, it was hard to sell even 10 pieces of packaged ngari a week. In due course of time, some growth came in his business as people started knowing about it. Now he can earn a turnover of Rs. 20,000 to 30,000 as profit.

Ngari which is a traditional fermented food item of Manipur is prepared by fermenting small freshwater fishes, locally known as fabou nga, with mustard oil. The dried fishes are then tightly packed in a big clay urn which is made airtight. The urn is then buried for 30-40 days.

Ngari is roasted lightly prior to consumption, and then added in many Manipuri dishes, such as eronba, morok metpa and kangsoi etc.

He said that he faced some market problems in his business as its market is mainly oriented to the Manipuris living outside. He, however, dreams to expand his business. His wife and children are helping him to promote the business.

If anybody wishes to taste Ningaijao Foods, Khurai Thoidingjam Leikai, Mobile number of the company +91-8974052137 can be contacted.