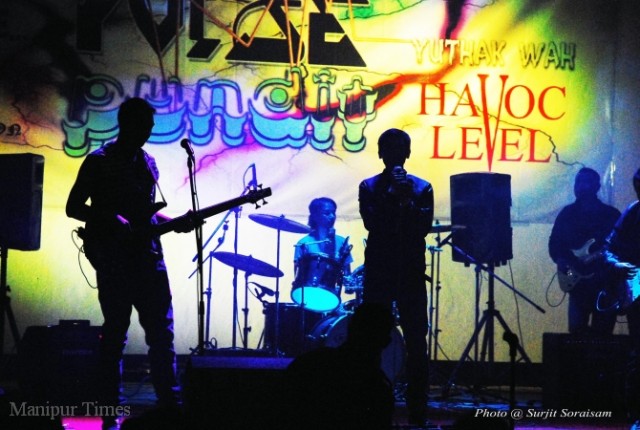 5 bands join together to give a thrilling evening at GM Hall where young boys and youths gather in large number on 10th feb. Pulse Pundit, On the Verge, Havoc Level, Dark Distortion, Yuthak Wah resounded the message of peace.

It was the evening where old friends meet again. The sound technician with dreadlock is seen sitting around. The pack of friends is sighted clubbing together. The hall was packed with music lovers.

In every aspect of life, be it administrative, private life, business life there is no peace in Manipur. Peace Raiser is here to bring peace. This Musical event is to raise the message of peace and unity through music expressed the organisers of the musical evening.

Ravi bass player of Pulse Pundit says the Band was formed in Dec. 2012. Our band is the reunion of childhood friend after 15 years. Other bands have joined us for the cause. Without profit motive we are here to spread peace and love message through music.

We priced the entry ticket at Rs. 30. We thought like it could cover the expenses like sound, hall hiring etc. Thirty rupees is an out dated rate in 2013. Even a small boy has 30 rupees in their pocket so no gate crash, and the concert goes smoothly in a gentle atmosphere.

In fact GM Hall was a very popular hotspot for music concerts a decade back. The stage has the right elevation. There is enough sitting space, parking for vehicles are another feature. In this way the middle aged crowds feel the real taste of their musical days. And the younger ones who are exposed to Lampak (green ground) music do sit around along with their friends in a behaving mood.

Ravi of Pulse Pandit was with two three bands in Calcutta. He has toured the Nation for performance.

Sharing Pulse Pundit’s band motive Ravi says that they are trying to enter in the professional circuit and bring laurel to the State and tour the country as well. Presently they are here to meet and jam for a larger network. We do not have much infrastructure in Manipur so it is not a big fun playing here but we get more experience in teaming and jamming says Ravi.

Earlier Cannibal’s, Phoenix has given the benchmark for our State. At present there are no bands touring the nation. The outside bands that learn from our elder musicians have excelled more than us says Ravi.

Live playing venue is increasing in India. Earlier Calcutta park hotel is regarded as Mecca of live music. Places like Blue fork, hard rock chains in Mumbai, Delhi, Bangalore, and Pune have mushroom up. There is a big change over the years and we need to grow feels Ravi.

Soulmate of Shillong had become an international band, why not a band from Manipur. In Nagaland State festival hornbill they conduct really well and band from across the country come and participate the music contest.

In our State the resource is there but misuse, wrong guidelines, lack of management, lack of professionalism, and thirst for certified skills seems to be some hindrance preventing from national and international achievements. Consequently we are not heading towards positive growth.

However some juniors’ who have attended music classes from Guitar school, sound engineers have come up. On their future it seems they are all working outside because of the infrastructure. They wish to work outside knowing the benchmark of the salary their friends earn outside the State.

Some of the cover numbers the audience were exposed to in the musical extravaganza are Desperate Cry (Sepultara), Slave New World (Sepultara), Infant Sauvage (Gozilla), The only Thing That sets us apart (Suicide Silence)

Original numbers were also presented from the bands. The silent hills from Havoc Level and few others from the rest of the bands could be mentioned.

The evening was lively and peaceful. The songs were heard and the minds for many were rejuvenated. There was energy in the performance and the night was lively.