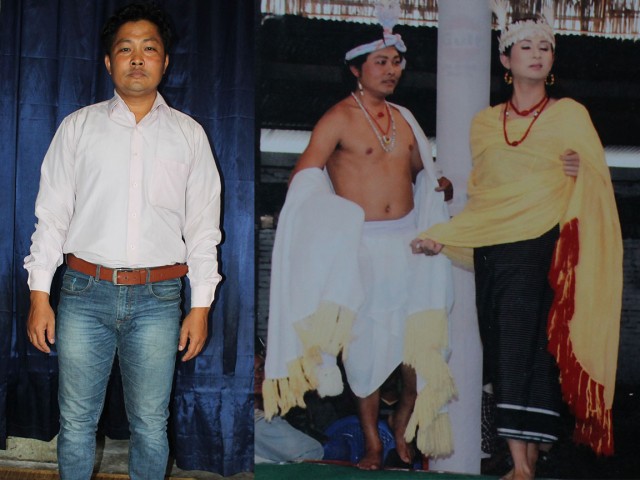 The family suffered complete downfall, all the properties – land and house had to be sold out to meet the medical expenses and payment of compensation for the injured person knocked down by his father’s Shaktiman truck.  Having no place to live, they took shelter at a neighbour’s house. He never retreated from such hard pressed struggles of life, but managed to survive as a manual workman sawing woods in deep forest with a handsaw in hand, sometimes pulling rickshaw in Imphal.

This is not a dramatic story, but a real tragic story which noted actor Yumnam Nilacandra personally experienced in his life. Success of this actor who rose from a humble and penury driven life background can be credited to his determined effort.

Born on February 1, 1976, Yumnam Nilachandra is the youngest son among five siblings (four sons, one daughter) of late YumnamLal Singh and Mema Devi of Thoubal Kiyam Siphai, Tangjeng. Pramo, Meghachandra, Joychandra, Udhay are his brothers and sisters. He did his primary schooling at Khong Ahanbi Junior High School and passed matriculation from Tangjeng Ningthou High School.

Apart from acting in Shumang Leela, he has acted in over 10 Manipuri digital films including Ireiduda, Dakpham, Shakhangdaba, Shakhenbi Iteima, Japan Landa Imphal, Ahing Mamei and Mami. His passion for art is not limited to Shumang Leela only. He is also learning music and Thangta martial arts.

Unlike other artistes, Nilachandra is such an iconic Shumang Leela actor who never shifts from a party to another. He is still working for Sanaleibak Nachom Artistes Association, the Shumang Leela group he joined for the first time in his acting career.

He has popularized the Manipur Shumang Leela art in many parts of the country including Orissa, Bihar, Assam, New Delhi, Kolkata, Bhopal, Mumbai, Karnataka, Mysore and Kerala. He is the secretary of Sana Leibak Nachom Artiste, one of the most outstanding Shumang Leela groups in the state and joint secretary to Manipur State Shumang Leela Council.

An actor who makes own ladder to climb top of success

Climbing the ladder of success in life is easy for those people born with a silver spoon in their mouth and having sound family background. However, climbing the ladder of success is an uphill task for those with no support and sound family background. Brought up in a penury driven family, Yumnam Nilachandra is an actor who makes his own ladder to climb the pinnacle of success with no support. For Nilachandra, “Life is struggle”. He never retreated from the struggle of life when severe frustrations, disappointments and difficulties of life stared him in the face. He challenged everything to achieve the desire goal he likes.

Leaving aside all the youthful joys and shyness, he began earning for his family by doing whatever available jobs to meet both end meals of the family – as a Rickshaw driver, sometimes as a workman in remote hill areas sawing woods with a handsaw in hand. He left the job and stayed in a rented house at Singjamei to earn for family as a Rickshaw driver.

Nilachandra recalled that his family suffered complete downfall when their family’s Shaktiman truck knocked down a person and series of accidents. Almost properties including land and house had to be sold out to meet the medical expenses and compensation payment for the injured person knocked down by their vehicle.  Having no place to live, they took shelter at the house of their brother.

Beginning of journey in art

He joined Sana Leibak Nachom Artiste as an office runner prior to acting.  Initially, he did not get the opportunity for acting in Shumang Leela plays. He began acting in Shumang Leela plays as a substitute artiste when an artiste failed to turn up due to illness or other inconveniences. For the first time, he got a small role of a Kashmir militant in Memsahepki sari.

Shumang Leela is my passion. I will continue acting. Artistes should be well disciplined and regard due respect to the senior. Otherwise, they will not achieve success, he said.