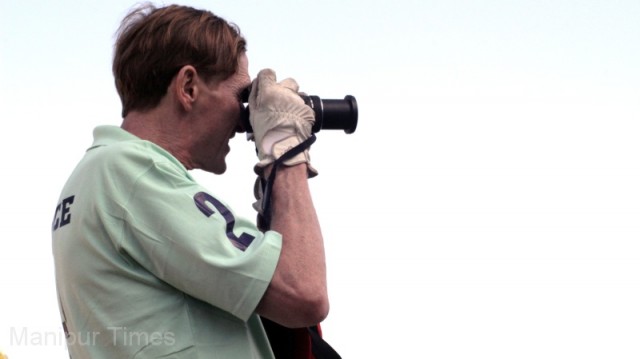 Manipur, being the birth place of Polo game, many international players and clubs used to take part in various Polo tournament held in the State. For this, Imphal Polo ground or Mapal Kangjeibung, the historic Polo ground situated in the heart of the Imphal city is the hotspot venue.

Four international teams representing Thailand, England, France and Germany took part in the recently concluded 6th International Polo tournament. Manipur times manage to interact with one of the players representing Germany team. He is Wolfgang Kailing, a veteran player which played at No. 2 position for his team. During the chit-chat, he shared his experienced about the journey to the State and game of Polo.

Following are few excerpts from the conversation:

MT:  How do you feel coming to Manipur and seeing the Mapal Kangjeibung Polo ground?

Wolfgang:  It is incredible. I am excited to know that Polo has been playing here since the last 160 years. The history of this ground along with the Pony is old as history of Polo game. People here are frank and open to foreigners and are very helpful.

MT: How do you find the condition of the Polo ground?

Wolfgang: The condition of the ground is excellent with vast and clean outfield.

MT: Since how long time are you playing Polo?

Wolfgang: I have been playing this game since the last 30 years.

MT:  How do you reach Imphal and have you visited any place in the city?

Wolfgang: We came by Turkish airline then by Indigo flight from Delhi to Imphal. It was a pleasant journey especially at the time of landing at Imphal airport. I can see beautiful hills, lake and other aesthetic greenery sites. Till now, I have visited the Loktak Lake which is very beautiful.

MT:  Do you see any differences between the International Polo and the game played in Manipur?

Wolfgang:  The game being played in Manipur is the original Polo. It uses smaller horse that can turn around quickly and are fast. Moreover, rules of the game follow here is more precise.

MT:  Since Pony uses here are of smaller size, do you find any difficulty in playing with it?

Wolfgang:  As a matter of fact one gets used to it after one or two matches. Advantage of smaller Pony is that it is handy and behaves well while playing.

MT: After experiencing the State of Manipur, are you willing to come here again?

Wolfgang:  Manipur is blessed with unique tradition and rich custom. I would love to visit it again.

MT:  How do you find the food and climatic condition of Manipur?

Wolfgang: For us, the food here is something that we easily get used to in quick time. It is very tasty with lots of spices and varieties. As far as climatic condition of Manipur is concerned, it has a moderate and healthy climate, not so hot and not so cold and is pleasant.

MT: Regarding playing Polo in Manipur, did your team bring all the accessories and equipments required?

Wolfgang:  We are lucky that all the required accessories like helmet, mallet stick, guard etc. are sponsored and provided by Manipur Polo Association.

MT:  Is there any difference between the striking stick used in Germany and in Manipur?

Wolfgang:  Yes, there are little differences regarding the length of stick. Here, they use stick of 45 – 47 inches but back home we uses stick of 51-53 inches or even more.

MT:  And what about the field size differences?

Wolfgang:  The field size here is little smaller as compared with our ground. But it is to be noted that here the size of the ground corresponds perfectly with the size of Pony.

MT:  Would you like to give tips to young Polo players?

Wolfgang:  Young players should study well the different technique and international rules used in the game particularly the line of the ball and positioning of players.