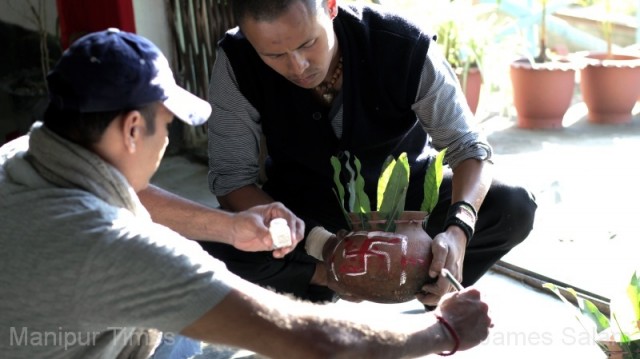 With many achievements in its hand and wide recognition, the Kanglei Mime Theatre Repertory is planning to organise an International Mime Theatre Festival, 2013-14 at Imphal soon.

In Manipur, the Kanglei Mime Theatre Repertory is a leading mime theatre group as well as in India. It is a centre for the art lovers and enthusiasts; creative artistes and the educated youths and was established in the year 1987.

Besides giving performances in various National Mime Festivals, the Director of the organisation, Dr. Yumnam Sadananda Singh had taken classes on mime in many workshops and attended many seminars and conferences across the country and beyond. Also, the Repertory has been implementing many projects on Culture and Education since its establishment.

Sadananda feels that he has witnessed new techniques and tones of mime around the world at the present trend. He now believes in fusion of mime with all other indigenous art forms of Manipur for a more thriving mime performance of International standards.

Regarding the outstanding achievements of the Repertory, mention may be made of its first participation in the 1st National Mime Festival held at New Delhi in the year 1998. The Repertory presented the play “Power’s Act”, based on a victim woman tortured by the Army.

In 2001, the Repertory participated in the 2nd National Mime Festival held at Kolkata and presented the mime play “Hanuba Hanubi Pan Thaba” based on a Manipuri Folk Tale.

In 2003, the Repertory participated in the 2nd and 3rd National Mime Festival held at Delhi and Guwahati respectively.

Dr. Yumnam Sadananda Singh Director of the KMTR had undergone extensive theatre training under the eminent international theatre Director Padamashree H. Kanhailal, Director of Kalakshetra Manipur, Imphal for two years with the National Theatre Scholarship entitled to him by the Department of Culture, Govt. of India. Notably, today Padamashree H. Kanhailal is regarded as the father of Manipuri experimental, alternative and physical theatre.

Dr. Sadananda hails from the group Panthoibi Natya Mandir, Yumnam Leikai at the start of his artistic careers as a performing actor prior to the establishment of K.M.T.R. The group P.N.M. established in 1971 is one of the leading theatre groups of Manipur having its own theatrical god-fathers in Manipur. It is now affiliated to T.C.M., B.N.S., I.T.I., – UNESCO Paris.

Kanglei Mime Theatre Repertory under the aegis of Ministry of Culture, Government of India organised the National Mime Theatre Festival at Manipur Dramatic Union (MDU) from November 10-12 of 2012. Various eminent theatre groups from Assam, West Bengal, Tripura, Rajasthan, New Delhi, and Kerala including Manipur displayed their skilful mime plays during the festival. The repertory is gearing up for yet another festival in the international level. With the earnest effort from the director and the supporting artists the group has been glorifying the State and their zeal for more success is an untold story ready to be unfolded.