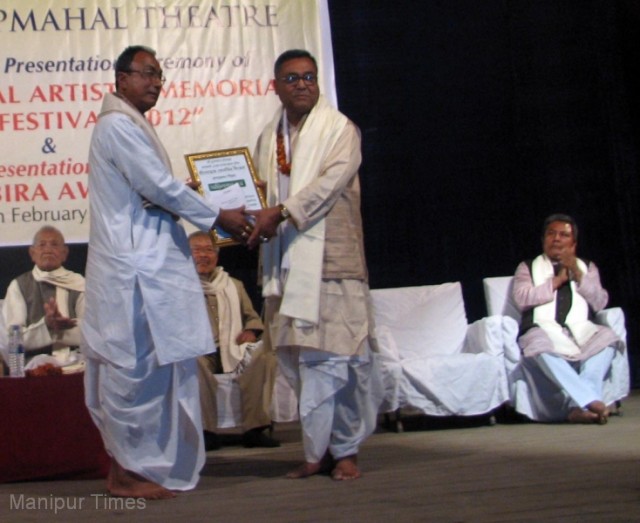 The much-acclaim “MeitramBira Award- 2012” has been conferred to renowned theatre artist and film actor Kh. Ibohal Singh. The awardcarries a cash amount of Rs 5000, a shawl along with an AbhinandanPatra.

It was presented during the closing and award presentation ceremony of 13thRupmahal Artistes Memorial Drama Festival- 2012” which was held today at Rupmahal Theatre in the presence of certain State’s noted theatre’s artists.

The awardee, Kh. Ibohal was born on February 13, 1932 at ChingngaMakhaKhetriLeikai in Imphal West district. He is the eldest son of (L) Kh. Birchandra Singh and Kh. (ongbi) Kamlini Devi. Since childhood he was interested in theatre’s play and drama. After joining Manipur Dramatic Union in 1941, he started learning the art of theatre under (L) SorokhaibamLalit Singh. As of his immense talent in the art, his name started gaining popularity in public domain. During his stint as an artiste, he has played in famous plays like “Madhabi” and “SingngenIndu” playing the characters of Bhubon and Gopalsana respectively in which public have appreciated much the roles he played. So far he has acted in 100 plus drama plays and also directed around 50 plays. Notably, in 1971 the drama played “Baktabilbamangal”, one of the plays he directed bagged the Best Director, Best Play, Best Actor and Best Actress awards.

During the ceremony, “Yingalei”, which clinched the Best Play of the festival, was also staged to mark the occasion.