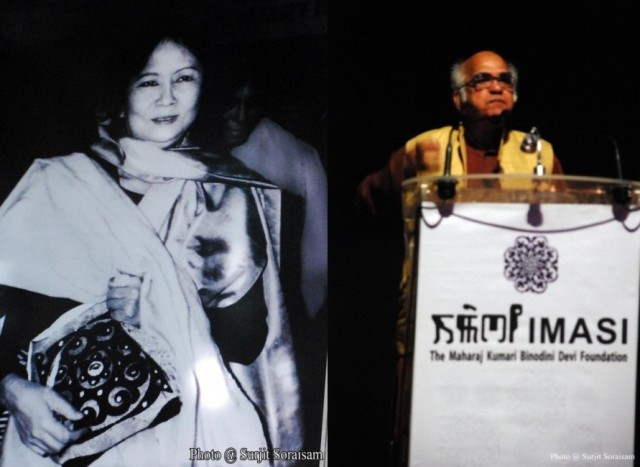 Re known critic and a well-wisher to MK Binodini, SamikBandyodhyay delivered a thirty minute long lecture on the topic, “Cinema across Culture”

Samik spoke on the cultural reflection of the region through the film Ishanou. He continued on explaining the culture as not only the practice but the affiliation of man and the nature. The association of a woman and a flower depicted in the film is explained as a rich culture by Samik.

He also expressed that he learnt a lot about Manipur and its rich culture from MK Binodini when she was alive. Samik’s association with the State is mostly based on cultural study over the last many years and his familiarity with Manipur is mostly expressed in the memorial lecture too.

Mention may be made that MK Binodini during her lifetime had contributed a lot to the development of Manipuri film. She did the original screenplay of the International acclaim film Ishanou, directed by AribamSyam.

On the same day the whole team of Ishanou’ including the director, artists, crew and the production unit were honoured felicitated by Dr.K.Sobita Devi Managing Director of MFDC.

The auditorium was packed with film lovers, family members, and well-wisher of ImasiBinodini who during her lifetime have contributed a lot in the cultural progress of the State.

On the objective note of the foundation behind the event – the preservation, protection, promotion and development of the artistic intellectual and cultural legacy of MK Binodini Devi is given top priority.

The foundation is hoping to support and develop initiatives in the culture of Manipur, its literature, performing arts, history, religious heritage, environment, internationalism, women and youth.

As a part of the function Ishanoufilm was screened at the auditorium. The film screening was attended by hundreds of people who have either watched or never seen the film. The younger generation who have heard of the international acclaim film but fail to watch because of the unavailability of DVD format in the market got a chance to watch the film. Elderly people who have watched it earlier got a new taste of the film in the doubly sound and comfortable sit at the cinematic MFDC auditorium.

The film is 94 min in length, color and 35mm in its original screening.

L Somi Roy son of MK Binodini is the managing trustee. Mailing reach of the trustee is 1goalprojects@gmail.com.