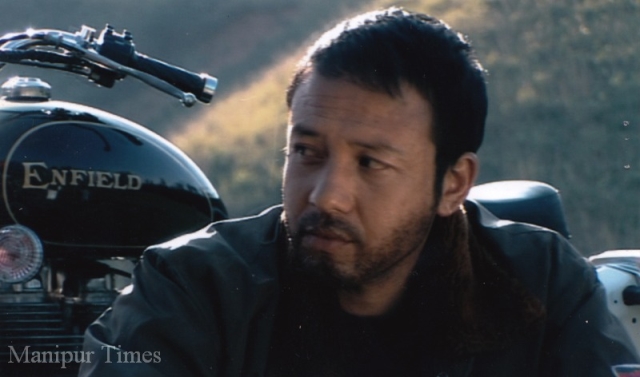 “ Tah Raju gidi khallunu eche Mira na yaraga loirae ’  a hitsong by Raju gave rise to a new character in Manipur Film Industry. A macho act with less word and local reflections. Raju had never acted in any film except he attended some theatre classes and represented himself in plays within the State and outside.

A singer turn actor Raju is a favourite in both the art form. The very song “Tah Raju gidi Khallunu Nache Mira na yaraga loirae ’ resembles real love story of the artists himself. Coincidentally the song was written by somebody who approaches him for making it to a song. The producer of the music album thought of making a movie based on the song where Raju was motivated to play the main role. This is how Raju Nong the favourite Singer entered the film industry.

In my Bag:  An aluminium Mug, Knife, Candles

“ I have sign a film with Homen D’ Wai where I would play the role of a garbage collector who fall in love with a girl from a resident at a garbage pick duty”.  This is my latest film venture says Raju Nong.

A film by Biren Salam “Bhoot Ki Paisa” where Raju played the main role will be on screen soon. The film was completed last November 2012. Another film is yet to be released too. “There were around 37 approaches and my film count is around 10 plus. I usually go by the role I was offered in most of the film I acted as I think it would suit me most”, says Raju.

Raju a singer turn actor never dream of becoming a singer or an actor. A shy fellow by nature he never use to sing on stage until his classmate who like his songs drag him to a stage where a song competition was held in Adamjati School when he was in the 6th standard. Luckily he won the first prize and from that very moment he gained some recognition and confidence.

Raju started attending music classes at Music College after completing his high school. He studied till second year at the then Music College (TG School Centre). Later he joined his classes at Laishram Mema’s Music centre and cleared Visharat from CTI in the year 1996 – 97 guided by Oja Kameshor. Raju became an approved artist of All India Radio around that year. He quit singing for some year for no reason until he come up with a solo album Ho Nong in the year 2002.

With no financial back up one of his friend Ranbir invested the entire amount of Rs 1 Lakh for the recordings at Bindiya Recording centre, Pishum Thong. Another friend Tarachand helped him in the lyrics of the album

With the release of the album ‘Ho Nong’ a star was born and people started to call him Raju Nong. The song was such a hit even the kids and the old besides the youth sang to their mood. People started inviting him to many musical extravaganzas and he became a renowned star interacting his audience far and wide.

Raju has recorded around hundred songs including film songs till now. His solo albums are Ho Nong, Bond, Sana Sabigae and Kite. Three of the albums are profitable ones to the investors as the record sale was big and Raju never charge the producer any money. He was much happy when people recognise him. The last album Kite was a loss for the investors as there was a revolution of CD which fumed the piracy market like anything till date.

Almost all of his songs are moody and boyish with the lyrics and the tune in a unique beat. On stage he loves wearing casual dresses like a simple T Shirt with jean and a jacket as winter wear. He often performs with a half pant which make him fancy with a sneaker. The attires make him comfortable and he swings to his tune.

He attended school at Adam Jati High School and complete his graduation from Liberal College. He missed his college election candidature on the nomination day by 5 minutes while he was travelling in a passenger bus to his college. However he continues serving his college volunteering his college mates to the annual youth festival organise by Manipur University. During his college life he was an active member of National Social Service, organising camps and other activities. He was popular among colleagues, junior, seniors and teachers of the college.

Raju learn the art of drawing from Oja Joy of DM Science during his vacation times for two years during his college days. It absorbs my mind and ease my emotion when I feel sentimental it is a very strong form of art says Raju. He has a collection of paintings in his custody. Two dimensional paintings and colour shades are some of his fine works. He has even work out a script in cartoon form for a film he wants to produce himself in future. The screenplay works are pencilled in paper booklets. The determination and efforts he puts on it will be realised one day and he is hoping to become a film maker someday.

Raju never uses a mosquito net at his home and sleeps on floor mattress with a mosquito liquidator in the electric switch board.

An adventure loving guy he narrated Manipur Times that he once ride up and down on a rainy night for a musical show at Ukhrul town all alone. Totally drenched he reached home at around 4 am. He was asked to stay the night at a hotel but his mood was to drive the night at that time.

So far Raju has won two best actor titles one by Film Forum Manipur for his role in the film Bomb Blast in the year 2010 and another by Sahitya Akademi and Sahitya Seva Samiti Kakching for his film Tilaikhombi.

Going back to where he started his film career Raju Narrated, “ I got an offer to sing for a song in a cassette album Dropati, the title of my song was Leikai Gunda. The script read as ‘ta Raghu gidi Khaluni Eche Memcha na Yaraga Loirae’. On the recording day I requested the producer to change the names to ‘Ta Raju and Mira instead of Raghu and Memcha in order to personalise my real life story as the script coincides with my real life love story. Suresh Hidang producer and script writer of the cassette album was impressed with the song and the video album and we decide to convert it to a full length film. Mera Memcha’ my first film was filmed and screened to a hit and people started calling me Ta Raju. That was the time I realised I entered the silver screen world”.

He learnt to drive heavy vehicle while screening Gari Driver where he played the role of a Truck Driver.

My songs are humorous and fun. Some soft and sentimental songs like “Kari Haiyo Haibagae” in the film Liklai are experimental and are glad people like it noted Raju.

I will sing and act as long as people like me.

My Message to the youth is regard your seniors and do not abuse drugs and alcohol. Live life to the fullest and I stand for you.