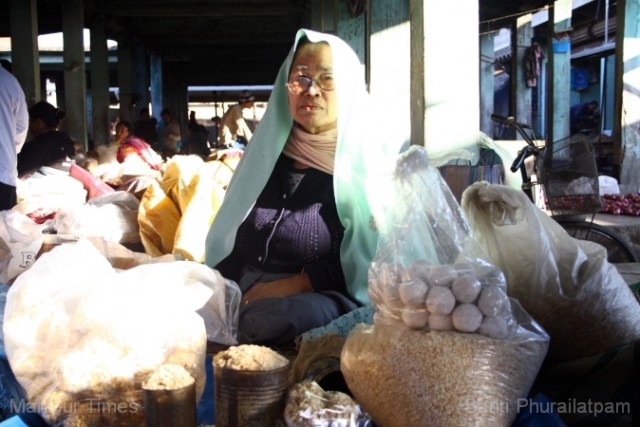 For the last 10 years I have been selling Kabok’ an indeginous crunch made out of rice crop. Some products are sugar flavoured while some plain. Lamlong bazaar the place where my business flourished is adorned by womenfolk. My name is Yumkham Sanahanbi, 67 of Lairikyengbam Leikai Imphal West and I like my profession. The market is a campus where I find my colleagues and share our life experiences in free time. Our market is well known by many and people in large come here every day to buy their items.

“Sana Kabok” a special type of Kabok prepared at my locality Lairikyengbam Leikai is a good buy by my customers. The variety is used in marriage ceremonies and other customary rituals.

There are about ten Kabok sellers in Lamlong Bazar and each one sells Kabok of about 1 sangbai. If they sell 1 sangbai of Kabok, they can earn a profit of about Rupees 300 per day.

Kabok is made from rice crop by frying it in pan whereas Chengpak is made by flattening the paddy after boiling it. Laalu is made from the residues of Kabok. “Daram” and “K.D.” are the varieties of paddy used to prepare Kabok.

Kabok is again mixed with Chini matum (a variety of sugar) and fried to make different types of Kabok like Kabok Khoidum and Kabok Muri and Sana Kabok. Preparation of Kabok is done at her home by herself with the help of her family members.

Another Kabok seller Yumkham Tamu, 85 said that she started selling Kabok when she was 15 years old. She came to know this profession since the time she married. When she started selling Kabok at Lamlong Keithel, the condition of the Keithel was not good. It was a thatched Keithel with lots of water loggings inside it. The present building of the market had been constructed about 20-25 years ago from now.

She said that she does not involve anything in preparation of Kabok at home. Everything is done by her family members. She is only selling the Kabok which is prepared by her children. She also said that this business is a seasonal one. “We earn more when there are more marriage ceremonies and other rituals”, she added.

She said,“ at times we can earn up to 1000 rupees per day after deducting the capital amount and other expenditures but the average earning capacity is 300/500.”

Since time immemorial womenfolk of Manipur take major role in fighting various social issues of the state. Apart from this, they also occupy a major share in the trade and commerce of the state.

Whether it is Khairamband or Singjamei, Kakching or Moirang, Kwakeithel or Lamlong, market is dominated by the womenfolk. Thus they become the major factor in the economy of the state.