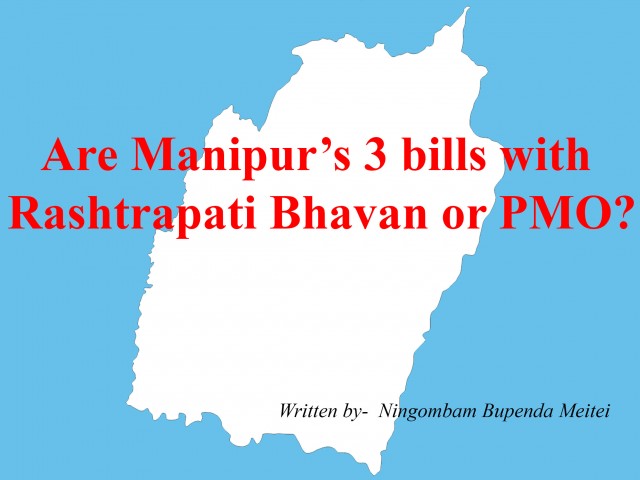 Whether or not the three bills – the Protection of Manipur People Bill, 2015, the Manipur Land Revenue and Land Reforms (Seventh Amendment) Bill, 2015, and the Manipur Shops and Establishments (Second Amendment) Bill, 2015 – unanimously passed by the Manipur Assembly are constitutional is to be decided not even by the Parliament but by the Supreme Court of India, if the bills become an act. The present complexities arising out of the three bills are primarily not constitutionally and legally complex, but the process of converting the bills into act which is not at all difficult is being made to appear so confusing, all because of the very fact that where the bills, whether in Rashtrapati Bhavan or PMO, are at present is still not discussed and less known to the common people of Manipur.

The state Chief Minister could also depute at least 2 (two) Principal Secretaries in Manipur Bhavan in New Delhi to only deal with different central ministries, PMO and the Rashtrapati Bhavan for a quick conversion of the bills into act. The state’s Residential Commissioner in New Delhi’s Manipur Bhavan could also facilitate the speeding up of the bills to become an act. One Additional Chief Secretary of Manipur must be given an additional charge to oversee the entire communication over the bills with Imphal and New Delhi. Without getting the bureaucratic assessment of the ground realities in New Delhi’s North Block and South Block along with the President’s Secretariat and PMO over the status of the bills, merely going to New Delhi will prove to be futile and that failure will almost belittle the credibility of almost all the political parties in Manipur, at present.

Politically, who will take the credit? The Congress – which has introduced the bills in Manipur Assembly or the BJP in Narendra Modi’s control which will ensure the conversion of the bills into act or the JCILPS (Joint Committee on Inner Line Permit System)? Who can also be blamed if the bills do not become an act in 2016 – whether the BJP which is in power in New Delhi is to be blamed or the less assertiveness of the Ibobi Singh’s Congress government in Manipur towards the Prime Minister Modi is to be blamed or the absence of the lobbying power or presence of JCILPS in New Delhi is to be questioned?

Leaving aside the politics of taking credit or hurling blame, the larger fundamental question is – where are the bills now? In whose office are the bills placed, at present? Are they in the Prime Minister’s Office or the Rashtrapati Bhavan? This question has to be replied not by separate answers but by only a holistic answer from both the Rashtrapati Bhavan and the PMO.

The question of raising issues out of the bills is separate but to prove that the bills are unconstitutional and illegal, and therefore they need to be rejected and opposed has to be decided not on the streets or in New Delhi but only in the Supreme Court of India as the Apex Court only can decide whether any act, after the bills become an act, is constitutional or not.

Ningombam Bupenda Meitei is a poet, author and orator.