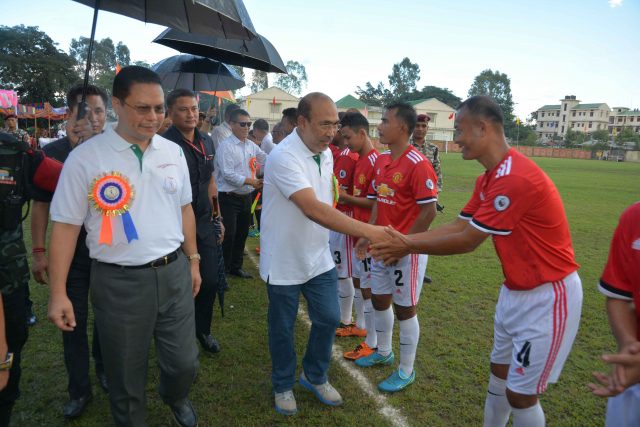 Imphal, October 10, 2107 (DIPR): Chief Minister Shri N. Biren Singh said that the State Government would develop 2-3 playgrounds by laying astro turf (artificial turf) in the State soon so that the players could play football all around the year/seasons. This is stated by him at the closing ceremony of Manipur Police Quasquicentennial Football Cup 2017 held at 2nd MR Ground, Imphal today. The tournament was organised by Manipur Police Department in connection with the 125th Anniversary of Manipur Police.

Hailing the Indian Football Team for their wonderful performance in the ongoing U-17 World Cup, Shri N. Biren Singh said that apart from some technical know-how on how to play in crucial moments and more maturely, the overall performance of the Team is good. He further stated that tiny State, Manipur, has a lot of potential in terms of promoting football as many players are representing the country at various international tournaments.

On the occasion, Shri N. Biren Singh said that unlike the past now people feel the sense of security when they see police in streets and realize that Police are the saviour of the people. Stating that Manipur Police is performing their duties with discipline, he stressed that various initiatives being taken up by the department are people oriented and certain initiatives like community policing etc. have successfully implemented and maintained a good and cohesive relationship with the people. In the last 6 months, we have seen a drastic positive change in the Police Department, he continued.

Chief Minister urged the different Sports Associations of the State to step forward and co-ordinate with the State Government so that we could mould good and potential players in the State.

Addressing his Presidential speech, Minister for Youth Affairs and Sports, Shri Letpao Haokip said that it is very delighted and heartening to see that 8 players from the State are representing the country at the U-17 FIFA World Cup 2017. Manipur is very much fertile in the field of sports, he added.

Minister further stated that it is the responsibility of the Police personnel to make people aware that Police are there to protect people from harm and help at bad times.