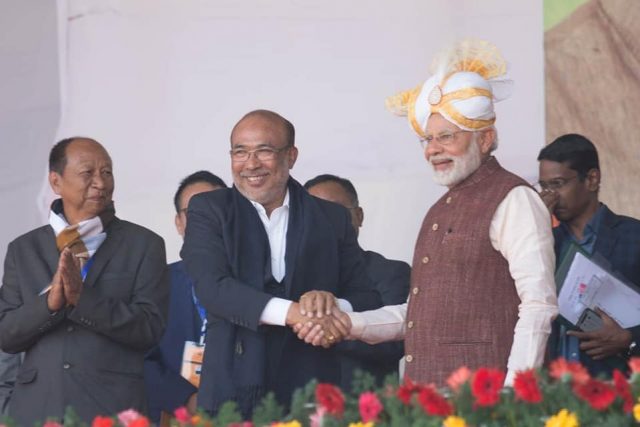 PM INAUGURATES VARIOUS DEVELOPMENTAL PROJECTS
MANIPUR HAS AN IMPORTANT ROLE TO PLAY IN NEW INDIA’S GROWTH: PM
Imphal, January 04, 2019 (DIPR): Prime Minister Shri Narendra Modi Modi today inaugurated and laid foundation stone of various projects worth over Rs. 1500 crores to improve “ease of living” for the people of the State today.
The Prime Minister inaugurated the Integrated Check Post at Moreh, the Dolaithabi Barrage Project, the FCI Food Storage Godown at Sawombung, Buffer Water Reservoirs, Shirui Ukhrul, Improvement and Upgradation of water Supply for Churachandpur Zone-III, Eco-Tourism Complex at Thangal Surung, Kangpokpi, Integrated Tourist Destination at Tupul, Noney and Water Supply Scheme at JNV, Lambui and its surrounding villages. He also dedicated the 400 kV Double Circuit Silchar-Imphal Line to the Nation.
He also laid the foundation stone for Infrastructure development of Dhanamanjuri University, Imphal, Flood Lighting at Hockey Stadium and Main Stadium at Khuman Lampak Sports Complex and Astro Turf Football at Langjing Achouba, Imphal West.
Addressing the mammoth gathering held at Hapta Kangjeibung, Imphal East district, Prime Minister announced that 5 helipads will be constructed under UDAN scheme in the State. Imphal International Airport will also be expanded and Air cargo Terminal will also be functioning soon, he added. Besides Air, Road and Rail connectivity, Information (I) ways will also be introduced which will connect every district with the rest of the Panchayats by providing broadband connectivity. This will facilitate in DBTL to the beneficiaries of every schemes, he mentioned.
The Prime Minister also announced that three new Women’s Market will also be constructed in the State soon. The government will also work for the establishment of Mini Sports Complex, Infectious Disease centre in Imphal and Community Health Centres in the State. During the last four years, around 1500 kms of National Highways (NH) has been added for North-East Region and out of which 300 kms of NH has been added for Manipur, he added.
Shri Narendra Modi paid homage to the brave freedom fighters, especially the women freedom fighters of Manipur. He recalled that the first interim government of undivided India was formed at Moirang, Manipur. He also recalled the support that the Azad Hind Fauj had received from people in the North East. He said Manipur has an important role to play in New India’s growth story.
The Prime Minister said that the Union Government and the State Government of Manipur are both working with the vision of Sabka Saath Sabka Vikas. He praised the “Go to hills, Go to Village” programmes of the State Government. He explained how better road, rail and air connectivity is being provided to the North East, with the overall vision of “Transformation through Transportation.”
While delivering his speech, Chief Minister Shri N. Biren Singh said that since 2014, Prime Minister Narendra Modi has been visiting various parts of the Northeast several times including Manipur to introspect the various developmental projects being undertaken in the region. Such gesture shows his love and concern to transform the region, he added. He mentioned that since the BJP led government came into power in Manipur, there has been a steep increase in the foreign tourist inflow in the State.
Chief Minister said that before General Elections in 2017, Prime Minister had promised to the people of the State that what Congress government could not achieve in 15 years, the BJP government shall deliver in fifteen months. Such promise has been fulfilled and the people have witnessed the ‘change’ in the State. The 139 days long economic blockade was lifted, bridged the gap between the hills and valley, improved Imphal-Jiri Road, and implemented various ‘people oriented’ welfare schemes such as CMHT, Lairik Tamhanlasi etc. The present government initiated ‘Go to Village’ mission, where out of around 2700 census villages 2630 villages have been covered so far, he added.
Stating that the government is working tirelessly for the empowerment of the women in the State, Chief Minister highlighted that a Fast Track Court was established to deal the cases related to crimes against women.
During the function Chief Minister, Deputy Chief Minister, Ministers Losii Dikho and Karam Shyam presented traditional gifts and shawl to the Prime Minister.
Speaker of Manipur Legislative Assembly, Ministers, MLAs, top civil and police officers and officials of various departments attended the function.
Prior to the function, Chief Minister Shri N. Biren Singh warmly received the Prime Minister Shi Narendra Modi at the Imphal International Airport.