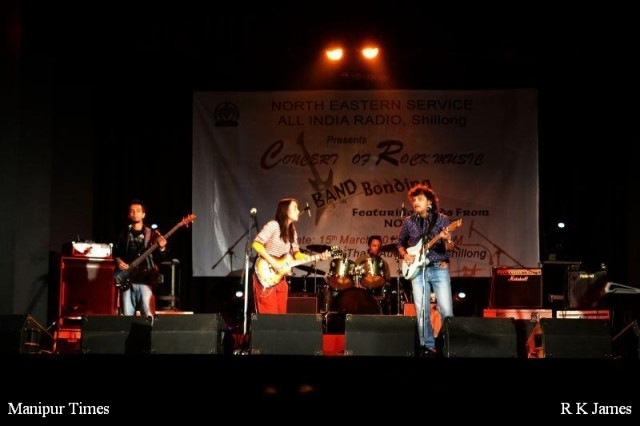 For the second time in a row, the Shillong centre of All India Radio’s north eastern service organised a rock concert under the theme Band Bonding where musical bands from across the North East came together on a single platform on the 15th of March. The live show was aired live across North East on AIR in the evening.  The bands performed two songs each on the stage.

Some of the bands that performed at the Band Bonding concert were Colours from Meghalaya, Withered from Tripura, Fringes from Manipur, Ron and Friends from Assam, Soulmate from Shillong, Alobo Naga and The Band from Nagaland, Even Flow from Mizoram, Fourth Element from Meghalaya, Lou Majaw and friends from Meghalaya, Shyllong from Meghalaya. From original numbers to cover songs in Jazz, Funk, Blues, Rock, Soul, Alternative Rock, and Progressive Rock the evening went on with energy.

“It is a good platform where all the bands come together from different background. It is a new experience and will encourage all the musicians.  It brings respect for other musicians. We would love the event to travel to other parts of the North East with hosting plans. The event is show casting the musical Talents of the North East” says RK James, event manager of Fringes who was part of the band bonding.

U Soso Auditorium with around 400 seating capacity was packed with music lovers, mostly youths. There was a sense of energy with moving cameras recording live for the planned telecast in the Doordarshan Channels and the audience.

There was love and unity in the air when the harmonic music sounded that evening. Soulmate from Shillong who had achieved international acclaim belted out their original numbers. The band has brought laurels to the North Eastern region and has been a favourite for many. Lou Majaw, the popular and evergreen musician was seen performing with his signature style of wearing shorts. A very friendly man, Lou Majaw won the heart of the North East and the nation, and wherever he travels there is always a huge crowd. His musical performance was magical and it kept the crowd grooving to his music.

Alobo Naga’s Dimapur band who recently won the Best Indian Act at the 2012 MTV Europe Music Awards (EMA) for their music video “Painted Dreams” also performed at the Band Bonding concert. Fringes from Manipur who did their blue numbers promoting Blues genre in the state and the national capital did their original numbers like ‘My Heart Sick Fella’ and their unreleased song ‘Miserable Women’.

The medium of radio ensured that the musical talents from the North East were heard all over the region.

“We learnt a lot from the concert. We get lots of encouragement from fellow bands too. Bands liked our music and wanted to be invited at the time of music fests in Manipur “says Haraba of Fringes.

At the end of the show a group number from all the bands dazzled the audience and echoed the region’s passion for music.

Each band has a sound check a day ahead for half an hour which helped the band practise for the main concert.  The event was one of its kinds. It is unique and lovely in the sense that people in the region love music and bringing together musicians on one platform showed the rich talents of these artists.

Not only promoting music events in the trouble torn region of North–East states of India is a big boon, but also such events give refreshing thoughts to the youth of this region.