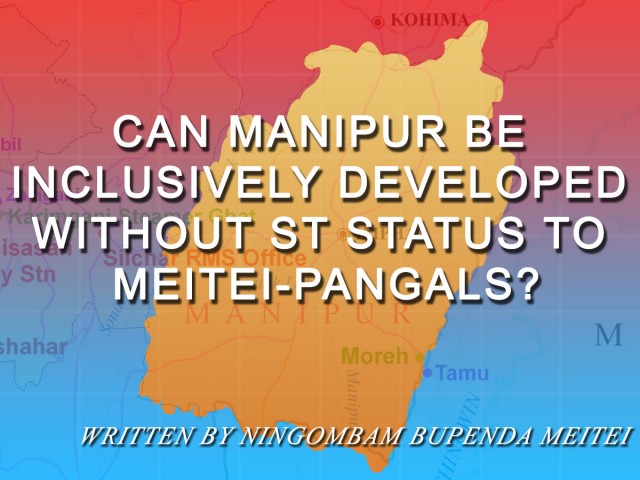 Meitei-Pangals are unique community whose genetics and hereditary, for at least a few centuries of years, can not be accepted as not related with some population of the Meiteis because if there is no such biological relationship between Meiteis and Meitei-Pangals, then the scientific explanation of prefixing the word ‘Meitei’ before ‘Pangal’ needs to re-studied. The mere assumption that all Meiteis are Hindus and all Meitei-Pangals are Muslims can be not so worthy to discuss in today’s world of secularism and modern science because there could be Meiteis whose religion is not only their own indigenous religion or Hindu Vaishnavism as there are Meiteis who practice Christianity, Buddhism, etc. Similarly, there could be Meitei-Pangals whose religion may be other than Islam. In a secular India, and in today’s world of rationalism and scientifism, not only a human can change his or her religion but also he or she needs not even have a formal and institutional religion and instead believes in spiritualism or agnosticism or atheism. The argument, here, is to stress that no community has a single religion to bind that very same community, as a religion is different from a community because the term ‘religion’ is not synonymous with the other term ‘community’. Therefore, as a community, Meitei-Pangals, too, can demand for Scheduled Tribe –  and their valid demand can not be overruled on the basis of a religion as Scheduled Tribe is not based on a criterion of religion, and if so, then how can a person who practices Christianity be listed under Scheduled Tribe category? – under the Indian Constitution. The question is – how can Meitei-Pangals demand Scheduled Tribe? The answer lies almost similar, perhaps may not be same, to that of the question when raised against Meitei-Bamon/ Meitei-brahmins whether Meitei-Bamon can also be included in Scheduled Tribe. The argumentative question is – if Meitei-Bamon can be ST, then why should not and what stops Meitei-Pangal to be also ST in Manipur under the same Indian Constitution? The argument, here, is not that – if Meitei-Bamon ‘is’ ST, then why ‘is not’ also ST for Meitei-Pangal? Instead, the argument, is  – if Meitei-Bamon ‘can’ be ST, then why ‘can not’ Meitei-Pangal be also ST? The distinction between ‘is’ vs ‘can’ needs to be understood, here. There are Meitei-Pangals whose surnames are in Meiteilon (Manipuri) and not in Arabic surname, and such existing surnames show that Meitei-Pangals are unique and special when it comes to their sense of being a part of Manipuri society which is heavily influenced by 32,000 years of Meitei civilization.

In a function of Meitei-Pangal students held in New Delhi, I, on an invitation, attended it and was honoured on a stage which was also shared by the present Member of Parliament in Rajya Sabha and MLA, who is also a Meitei-Pangal, from Manipur’s Congress Party. I went to the function wearing a Karakul hat/ Karakuli (or Jinnah cap), which was bought from Jama Masjid’s entrance, and sat, side by side, next to the MLA, whose identity was not known to me at that time. The MLA too did not know me either. My impression was that the MLA must be a Meitei from his physical features. As I sat there, the MLA asked me – a Meitei wearing the Karakuli on his head – in my ears, “Are you a Maulvi?” I replied, instantly, “I am not. I am a Meitei.” The conversation though did take place in Meiteilon (Manipuri). The reason why I write Meiteilon instead of Manipuri is because I, also being a student of Linguistics, have come across that the linguists of the world do not recognize Manipuri as a language but rather it is only Meiteilon on which researches have been done in all major Departments of Linguistics of the world universities. The Meitei-Pangal MLA thought I was a Maulvi, the learned Muslim religious scholar or doctor of Islamic Law, while I, as a Meitei, thought that that Meitei-Pangal MLA was a Meitei. That mutual confusion is the classic presentation of a beautiful co-existence of Meiteis and Meitei-Pangals that both find deeply difficult even to differentiate not only between the two but also among themselves. The MLA is none other than Parliamentary Secretary Md. Amin Shah. In my speech at the function, I stressed on the urgent necessity of establishing the “Meitei-Pangal University”, on the lines like Aligarh Muslim University or Jamia Islamia University, in Manipur.  Prior to the function, I was also invited, a few years back, in a similar event in New Delhi by the Meitei-Pangal students.

At Sora village of Thoubal district of Manipur, I was invited to give a talk to motivate the Meitei-Pangal school students at Sora bazaar. I accepted the invitation and went for the talk wearing the same Karakul hat in a car being driven by my friend who is a Meitei-Bamon. We went at Sora because the invitation came from none other than our close friend, who is a Meitei-Pangal, and with whom we studied together in school. I and my Meitei-Pangal friend from Sora, together, went to the same school, which is considered to be the best school in the North East India – Sainik School Imphal – and the college, St. Stephen’s College, Delhi. I, being a Meitei whose religion is not Christianity, and he, being a Meitei-Pangal whose religion is also not Christianity, went to study at the country’s best college not through a reservation but purely on our own merit in our college, which is a Christian minority college. But, the reality is that the majority of the Meitei-Pangal youths are not like my close friend who, without a reservation, got admitted in the topmost college of the country. I discovered that reality while having lunch with Meitei-Pangal youths and students after the event. At Sora, while interacting with the school young students and college students, who are mostly Meitei-Pangals, I have genuinely realised that without the reservation of Scheduled Tribe being extended to Meitei-Pangals, not to talk about Manipur as a tribal state, in fact, Manipur can never be an inclusively developed state. Therefore, Meitei-Pangals’ demand for Scheduled Tribe status is logical, valid, legal and constitutional and hence, not only the Congress government led by Okram Ibobi Singh in Manipur but also the BJP Government, at the centre, led by Narendra Modi must seriously commit to the inclusion of Meitei-Pangals in Scheduled Tribe category.

The demand of Meitei-Pangals for Scheduled Tribe category is not to destroy the existing fabric of Manipuri society but instead it will ensure the true inclusive and overall socio-economic development of Manipur with humane face. The demand is not illogical, it is neither illegal nor unconstitutional. It is, indeed, the decades’ old hidden pain and truth of Meitei-Pangals that needs to be appreciated, accepted, understood and considered so that the true meaning of democracy, in our own largest democracy of the world, remains meaningful in many villages which are predominantly, since an ancestral time, occupied by Meitei-Pangals who have never been given an opportunity to be an elected representative in Lok Sabha or Manipur Assembly, except 2 seats in the assembly, but have been only giving votes, as true citizens of a democratic India, in Manipur. The inclusion of Meitei-Pangals in Scheduled Tribe category is to be taken seriously and strongly, and the recommendation of Meitei-Pangals for Scheduled Tribe needs to be executed by the Manipur Cabinet headed by the state Chief Minister Okram Ibobi Singh so that the true overall inclusive growth and development of Manipur with its people, its youths and its future, are and shall be a reality soon. Whether or not Manipur remains or becomes a tribal state, without the inclusion of Meitei-Pangals in Scheduled Tribe category, the people of Manipur can never witness an inclusively prosperous and developed state of Manipur.

Ningombam Bupenda Meitei is a poet, author and orator.