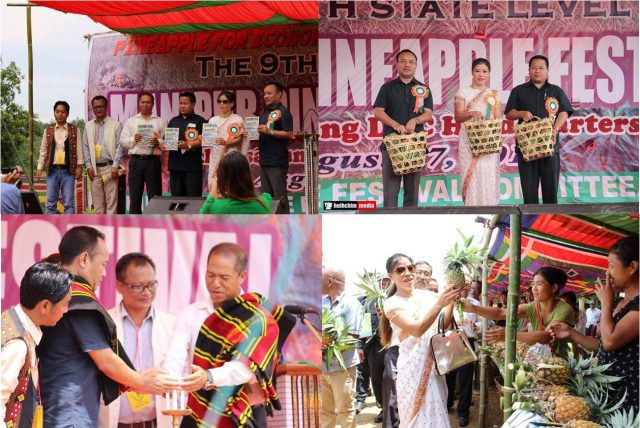 In 1947, one by name Pu Songpu Gangte planted 40 saplings of Kew variety of Pineapple at Khousabung, the Geneva of the Gangte Tribe. Today, Khousabung Region is the largest producer of Pineapple in Manipur. Over 1000 acres of land are filled with Pineapple with a work force of more than 300 farmers! Lengthei, which means Pineapple – thy name be held high!

Graced by one most decorated Indian’s ‘Daughter’ in Padma Bhushan Dr MC Mary Kom, the Manipur Pineapple Festival was one higher ups, with the occasion becoming one of the much awaited calendar event in Manipur.

Salute to Dr MC Mary Kom, a five-time World Boxing Champion, a bronze medalist olympian, a highly decorated recipient of Arjuna Award, Rajiv Gandhi Khel Ratna Award, Padma Shri & Padma Bhushan. A ‘honoris causa’ doctorate in Literature from the North – Eastern Hills University (NEHU) and a nominated Member of Parliament (MP) in Rajya Sabha. It was a glorious chapter that a ‘National Icon’ sharing a ‘moment’ with the farmers who are always on the fringe of social strata.

THE ‘3 Es’ FORMULA FOR DEVELOPMENT OF KHOUSABUNG REGION

Calling the attention of the Hon’ble MP (Rajya Sabha) Dr MC Mary Kom to raise the issue in Parliament, his truly, in his key-note address outlined the ‘3 Es’ Roadmap for the development of Khousabung Region:

Considering the centrality of its location and feasibility of connectivity and being the Headquarters of 01 – Khousabung District Council Constituency since the inception of ADCs in Manipur, I have suggested for immediate creation of administrative unit in the form of Khousabung Sub – Division in order to address the long standing demand of the people and ultimate deliverance of ‘justice’, which could be a harbinger of progress and development for the most ‘backward’ Khousabung Region.

With Khousabung Region being the largest producer of Pineapple in Manipur, the Government – both at the Centre and State could do better by setting – up of Cold Storage and Pineapple Fruits Processing Centre within Khousabung Region. The ultimate goal of setting – up of Fruits Processing Centre would be to tap natural resources to the maximum for the overall benefit of the farmers and the State’s economy in general.

Giving boost to the catchy ‘Inclusive Growth’ slogan, opening of banking sector at Khousabung is the need of hour. The banking sector, besides giving loans and financial training to the farmers, could well be a ‘goldmine’ for depositing of their meagre earnings and thus giving ‘security’ of livelihood in the form of savings.

The off shot of natural resources are our national assets, so does ‘Pineapple’ is our pride. Glad that I am a part of the grassroots movement for promotion of pineapple and empowerment of the farmers’ community for the last precious years since its inception. On the threshold of entering a decade of grassroots movement, with stronger force and higher commitment!