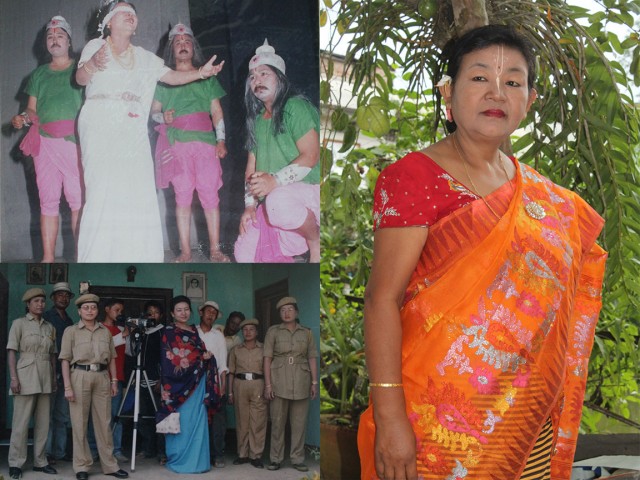 Well known with her alias Mombi, Thongam Thoithoi  is a multi faceted Manipuri film actress, filled with lots of talents a person could possibly imagine. She is popularly known as “Mombi”, a role from one of her digital film titled “Phairenthagi Angaoba Leichil” wherein she acted as a comedian artiste. As she is highly popular with the name Mombi, most people have even forgotten the actress’s real name ‘Toithoi’. This is in fact a success of the 52 years old actress Thoithoi who have contributed a lot in Manipuri cinema.

Beginning of her journey in Art & Acting

Born on Feb 1, 1963, Thoithoi who had a great passion for Art & Acting began her acting career since her young age of 11 (eleven) years. She learnt the skill of Dance, Music and Drama under the Guru Shrimati Hanjabam Aruna Devi, Ningthem Pukhri Mapal, Imphal, Manipur at her institution “Raga Taranga Mandal”.  Aruna was her first guru of her acting career. Under her guidelines, she got the first opportunity to act in a drama namely “Taragi Cheikhei” with the role of “Tharik” written by Khundongbam Brojendro Singh at Maharaja Garibaniwaj Memorial Club, Wangkhei Ningthem Pukhri Mapal, Imphal.  She began her career in acting and theater arts before setting her foot in to film industry. She initially acted in proscenium theatre and radio plays which later on motivated her to be an actor in Cinemas. Thoithi is today highly acclaimed as a great comedian of the Manipur capturing thousands of hearts and adding laughter with her act as a comedian.

More popular for her comedy roles, Thoithoi can be described as a gift for the rising Manipur digital cinema. She has acted over 100 films and most of them a hit and still counting. Similar to her act seen on screen in real life too Mombi is a simple and jolly person.  She said that she has no any problem to act with any actors or directors  as she believes that mutual understanding, co-operation and adjustment to whatever she is given keeps her going. However, Diya Khwairakpam is among the directors of Manipur Cinema which she described as one of the best to work with, the reason for which is the understanding he had making work very simple. Besides Diya, Ojitkumar, Bimol Sharma, Romi Meitei are also very good director with good relations.

While sharing her memorable memories in her child hood days she said that receiving awards while she was young for best actress in drama was something that titillates her till today and another unforgettable moment she said was that she was once frighten life out of her by some of her colleague before a play called “Saroi Khonthok”. The very day as she was a bit late for the play hurried towards the rehearsal room where every already prepared with their costume and mask frightened her like anything and that is the moment she still can’t forget.

Her Popularity as “Mombi”

She said that people started knowing her by the name Mombi which was actually made popularized by her co-actor a well known comedian Guna. In a film in which she acted with comedian Guna, the later teased her by calling the name “Mombi, Mombi…” which made the audience laugh. She said that she could make a successful career in art with the full support of family. Without their support, nothing is possible. She gets full support from her husband and her in laws. With all these blessing and supports she decides to act in films till hr last blood.

Thoithoi is the eldest daughter among four siblings of Thongam Thambou and Kombi Devi of Wangkhei Angom Leikai. She married to Thokchom Shamungou of Changangei Uchekon and is now a mother of two daughters – Korin and Sugani.  She began her primary schooling in Shine centre Soibam Leikai and shifted to Wangkhei Girls High School and Ananda Akademy. However, she passed Class-X from Bengali high school in 1982 and graduated from MB College. She joined government service as a clerk under Revenue Department in 1985 on contract basis and was later on regularized in 1995.

In 1990s, Thoithoi started acting in film. “Chekla Paikhrabada” was her first film. So far, she has acted in many films.  She acted in celluloid films including Leiee Ama, Chekla Paikrabada.

She became an AIR approved drama artiste in 1983 and performed in many radio plays including the famous Nongallabasu Thabalei Leinam penned by Moirangthem Inao.