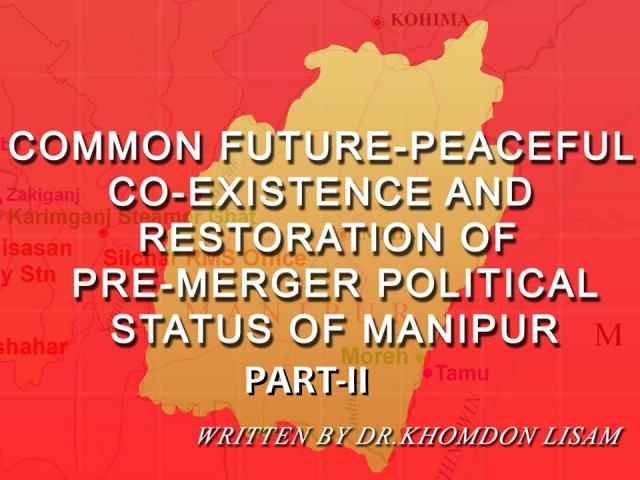 Dr.Khomdon Lisam (in continuation from Part I)

Origin of the word “Tangkhul”

The name Tangkhul was given to them by the Meiteis. There are many legends regarding the origin of the word Tangkhul .

Connection between Meiteis and Kukis

Many authors are of the view that the Meiteis-Kukis relation dates back to 33 CE. Kuki is a generic term applied to the various sub-tribes, viz., Thadou, Paite, Hmar, Simte, Zou, Gangte, Vaiphei, Guite, Ralte, Sukte, etc. In Manipur, Kukis were called Khongsai or Khongjai before the use of the term Kuki. Khong means drum and Sai means beating or hitting according to Thadou-Kuki dialect. According to Meitei pooyas two Kuki chiefs namely Kuki Ahongba and Kuki Achouba were allies of Nongda Lairen Pakhangba while ascending the throne of Kangleipak in 33 CE. Nongda Lairen Pakhangba’s mother was a Kuki woman named ‘Lenghoi’ or Nungmaidenga belonging to the Chothe clan. (William Shaw 1929: 47-48). According to “Cheitharol Kumbala”, the royal chronicles of Manipur, Meidingu Taothingmang, a Kuki became king of Kangleipak (Manipur) during 264-364 CE. King Naothingkhong ruled Manipur during 663-763 CE. He was known as Hongnem Yoi Khunjao . He ran away from home for fear of wrath of his father at a very young age. He lived with the Sheilloy Langmai in Nongmaijing Hills and married a Langmai girl named Petangnga. When he became the king at Kangla, Petangnga came to see him. She was shocked to find a Khuman princess, daughter of Punshi Yumoiba sitting at the seat of the queen. She died of shock and disappointment. After her death, she was worshipped as “Yumjao Lairembi” by the royal family. King Naothingkhong used to worship Mangang Kuru, Luwang Kuru and Khuman Kuru .

During Raja Nar Singh’s period (September, 1844- April, 1850), a large number of new Kukis migrated to Manipur and with great efforts; they were settled in various parts of Manipur. During Chandrakirti’s reign (1877-76), about 2000 Kukis migrated to Manipur being driven northwards by more powerful groups. They were tall with good physique. They brought a large number of muskets and ammunition. The Maharaja settled them near Moirang in the south western corner of the valley.

Mention may be made of Raja one Chongja Kuki taking pity on the Raja fired off his gun and said to the Raja, “The Raja shall not die until I, Chongjaam first killed the Raja’s enemy “.This cheered up the Raja and the followers of Chongja having made a “Vaileng” (cane suspension bridge) got the Raja safely across and into safety.(William Shaw – 1929:48-49). (TS Letkhosei -Sangai Expresss
dated 31 May 2015

As per William Shaw in his book, “The Thadou Kukis” (1929: 48), the Burmese repeatedly invaded Manipur in 1758 (Gour Shyam) , 1765 (Ching-Thang Khomba/ Rajarshi Bhagyachandra)  and 1775 (Rajarshi Bhagyachandra). At the time of the Burmese Invasion, the Raja of Manipur fled for protection to the house of Thongsat Kuki’s father, where the Raja ate only ‘Ga’ (beans) for several months. When the Burmese left, the king returned home with Thongsat’s father and Kaikholal Kuki.

The Kukis fought bravely with the British in the famous Kuki Uprising of
1917-1919.   With the defeat of the Kukis in the uprising, the British India started arresting the leaders of the Kuki uprising vide Order of the Governor General in Council signed by R.E. Holland, the Secretary to the Government of India dated the 8th December 1919. Twelve Kuki chiefs from Burma were imprisoned in the Taungyi jail of Burma while another twelve leaders from Manipur were imprisoned in the Sadiya jail of Assam. They were later deported to the Andaman and Nicobar Island jail. (Zalengam: 1998 & Document: Warrant-1919, Delhi)

Hearing the forced annexation of Manipur by the Government of India,, the Kuki chiefs  sent 250 armed warriors to be deployed at the Palace gate to protect the king, Maharaja Bodhchandra. (Zalengam: 1998 & S.M.A.W Chisti 2005: 149).

The North East  India is strategically very important for the existence of India as a country .

The Government of India is ready to grant  Shared Sovereignty to NSCN-IM not out of love for Muivah or NSCN-IM but out of fear for China.

Then what strategies are they adopting  to fulfill their hidden agenda?

Manipur had a Constitution before India wrote one

Manipur was a democratic country before India become one.

Series of blunders committed by the Government of India against Manipur

In this connection, we may refer to the statement of G.K. Pillai, former Union Home Secretary, which was published on 27 September, 2011 in the Telegraph newspaper. According to him, the repeal of the draconian act AFSPA-1958 was one of the first steps towards resolving the vexed conflict of Manipur’s valley and hills. He said that “the ancient kingdom of Manipur had a constitution even before India wrote her own and had a proud history and was overnight turned into a C-category state in 1948. He further added “we have to build trust by dealing with the core issues. An apology, say by the Prime Minister or the Home Minister, for the past mistakes could be a start.”

Signing of the Instrument of Accession on 11th August, 1947

Declaration of Sovereignty and Independence of  Manipur

On the night of 14th August, 1947 at 12 P.M., Mr. Gerald Pakenham Stewart informed Maharaja Bodhchandra that the paramountcy of British rule in India had come to an end and India became independent from that particular moment. He handed over the reigns of Manipur to the Maharaja in presence of Sanasam Gourahari , Private Secretary and Mr. Mayengbam Anandamohon, ADC. On 28th August (Thawan), 1947 AD,( Thursday) at 12 midnight , the sovereignty of Manipur was declared by the Political Agent Mr. Gerald Pakenham Stewart, ICS and he  handed over Manipur to Maharaja Budhchandra Singh and Maharani Ishwori Devi at the Manipur State Durbar in presence of  all senior Officers and a large number of people.  Maharaja entered Kangla at Imphal and hoisted the National Flag of Manipur bearing the Pakhangba Flag. Top-guns were fired 18 times by Ahongsangbam Bidhu, Top Major in honour of the Sovereign Kingdom in the presence of a large crowd. ( Sarangthem Bormani- Meitei Ningthourol , 2nd Edition, 2000).

On 11 and 18 June, 1948, election was held in the valley areas and on 26 and 27th July, elections were held in the hill areas to elect people’s representatives. On 26 November, a Non- Congress Coalition Government was formed as no party could secure an absolute majority. The new ministry was headed by M.K. Priyobarta Singh , younger brother of Maharaja Bodhchandra Singh with following  ministers :-

Dr. Ningthoujam, Leiren – Minister  in charge of Education and PWD

The writer may be reached through-khomdon.lisam@yahoo.com