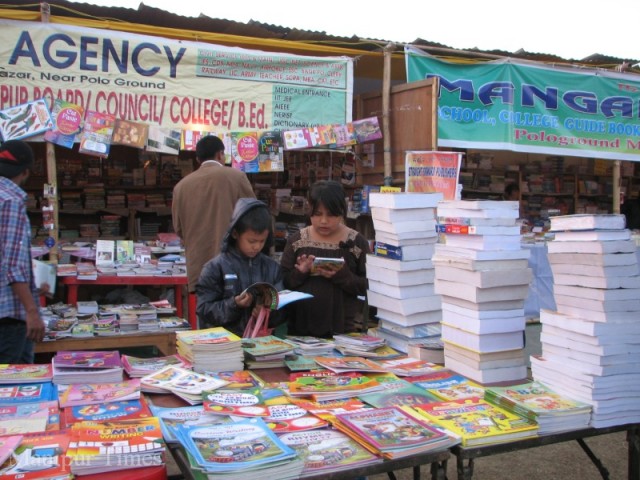 Students and bookworms were attracted in huge numbers by the recently concluded 21st Imphal Book Fair.

S. Tampakleima, Chief Librarian of Manipur State Central Library told Manipur Times that the 10-day book fair was organised with the objective to serve as a direct meetingpoint  betweenbooks and book lovers. It also gave the opportunity to buy different books which were not available in local market.

She said that the book fair remained open from 10 am to 7 pm daily.

Seeing the number of visitors, it could be said that reading habit had been improved in Manipur.

People nowadays think that this is the age of computer and reading books is hardly necessary but books supplement many information which a student will not able to find on internet.

However, sale of books differed from one stall to another as it was based on the availability of books.

Anjit Singh, sales manager of Avatar Book Store, Guwahati said that this Book Fair was very beneficial to the people of Manipur especially to book lovers.

It gave an opportunity to buy books which were not available in Manipur. Students and bookworms could take this opportunity. Important books available in this stall were Physics, Chemistry, Biology and books of other subjects as well as table books.

He said that the sale of books at the 21st Imphal Book Fair was good but a little less as compared to last year’s fair.

W. Jennifer and W. Genius, two children who visited the fair said that they felt very happy to have such kind of event in Manipur.

“It gives us an impact to become a book lover” they said.