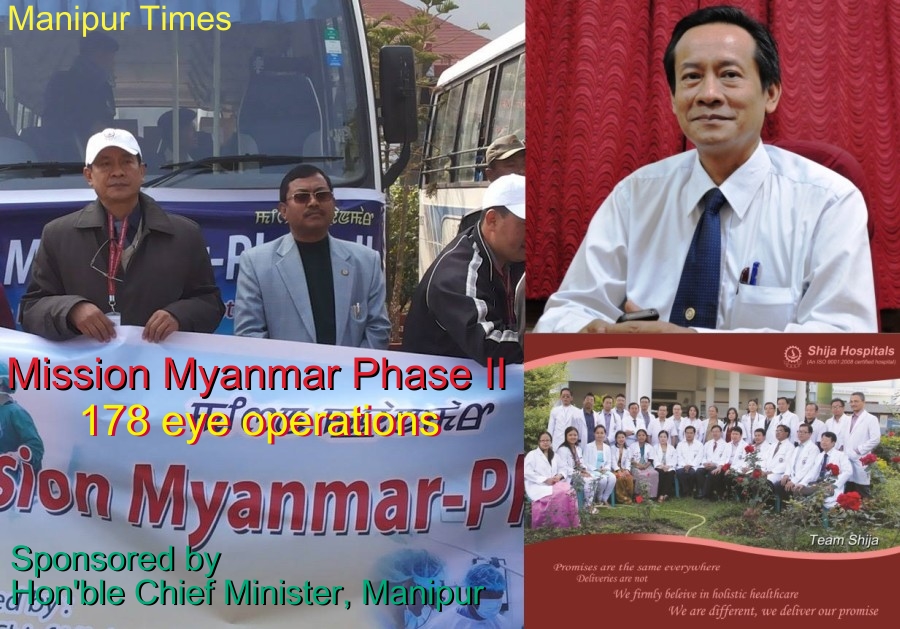 “Globalization starts from kitchen – is the notion we are adopt to boost the trust of local people unto us first and then the people outside Manipur and India”,  says Dr Palin.

Under his leadership, SHRI has been working for the past two decades providing world class quality healthcare aspiring to be a healthcare hub of South East Asia and he believes in maintaining goodwill with the neighboring states and countries to enhance the reliability of making Manipur the healthcare destination.

Dr. Kh Palin was born and brought up to a middle class family in Imphal in the year 1956. His roots being in the village of Heirok, he enjoyed a cherished childhood with freedom of thought, simplicity of village when he was taken to the village occasionally. His father, Late Itocha Kh was once elected as Member of Territorial Council from Heirok when Manipur was a territory. The rival lost the deposit as he stood for the farmers.

He studied at a school in his locality, Wangkhei and went for his higher secondary at Johnstone Higher Secondary School. After completing his XI Standard in the year 1972, he studied pre medical at DM College, MBBS at Regional Institute of Medical Sciences, Imphal.

He faced the untimely tragic death of his father due to a road accident on the last day of application form submission for MBBS. Perhaps, he inherited the sense of helping the weak people from his father.  Dr. Palin Kh installed Awards and Scholarships in 2006 in the name of his father for meritorious students of Class X, XII and Medical Students of Heirok. He feels it is the only thing he could pay his father who could not see him as a doctor. Human resource is the greatest resource for civilization.

Immediately after passing MBBS he was appointed as Registrar in Casualty at RIMS from 1980-82. Having the aim of higher education, he left RIMS to pursue MS in General Surgery at PGI Chandigarh. After the completion of MS Course, he rejoined RIMS to continue his service in the Department of Plastic Surgery as a Registrar. He never put himself on hold during his journey of learning and expanding his services. The determination in him to learn more and having realized the need of Plastic Surgeons in the region made him set off for PGI Chandigarh again where he continued his studies for  MCh (Plastic Surgery) course in 1990 -1992.

He was then promoted to the post of Assistant Professor of plastic surgery in at RIMS. He felt limited at RIMS, revealed Dr Palin Kh. He always wanted to put a hand in rapid advancement in healthcare as many patients were going outside the state for health reasons. So he resigned from RIMS on March 16, 1996 and focused in Shija Clinic, RIMS Road which was born at Paona Bazar in 1985.

Today Shija Hospitals & Research Institute (SHRI) stands as one of the pioneer and leading 200 bedded multispecialty hospital with 36 critical beds and 21departments. The hospital caters to the populace of Manipur in particular, North East India in general and also of the neighboring country of Myanmar.

Today, Dr.Palin is one of the influential figures having received various awards and accolades for his contribution towards healthcare: “Top 50 pathfinder doctor entrepreneurs of India” by Express Healthcare Management, “NETV People’s Choice Award 2005” by North East Television, “North East Excellence Award for entrepreneur for large enterprises for 2009” by Indian Chamber of Commerce and Ministry of Development of North Eastern Region (DONER), Government of India, “25 most influential icons of North Eastern India” by Eclectic North East Magazine in 2012 and “Best Adjudged State President of IMA” at National IMA Conference 2012 are some of the awards and accolades that he has received.  He was also felicitated as “An icon entrepreneur in the midst of insurgency” in the North East Festival 2013, held at Delhi

Shija had a humble beginning in 1985 as a clinic with just as a consultation chamber with minor operation theatre attached to a pharmacy at Paona Bazaar, Imphal. Shija is the name of his mother. The chamber and its good services gradually expanded and compelled him to upgrade with major surgery facilities. But the location and environmental conditions did not permit. After 3 years of its service at Paona Bazaar, the clinic was shifted to RIMS road on October 3, 1988, Dr. Palin recounted. ‘Key Hole’ surgery captured his imagination. He brought the ‘Era of Key Hole Surgery’ in Manipur on 10th of May 1996.

‘Inconveniences are the root causes of our success’ Dr. Palin Says. Inconveniences at the clinic at RIMS Road in terms of architecture and environment forced him to find an alternative. One patient after repair of fracture bone felt down from the stretcher while being transported from OT to bed on the staircase, he recounted as one of example. Name changed from ‘Clinic’ to ‘Hospitals’ and ‘Partnership’ to ‘Private Limited Company’ for a bigger role in changing healthcare landscape of the region.  Mother Nature bestows those who persist. Dr Palin found the foothill of Langol, a beautiful eco-friendly picturesque location at the outskirt of Imphal which is 5 km away from the city. The half-completed hospital having 65 beds and two operation theatres was inaugurated on 15th September, 2002 by the Chief Minister of Manipur, Shree Okram Ibobi Singh. In the following 4 years, the construction was completed and his service expanded with world-class 200 beds and ISO certified 21 disciplines.

SHRI is the first hospital in the state of Manipur to be certified ISO 9001:2000 in 2006. Shija is the first Mercury Free hospital in Eastern India in 2010 and strictly following the Biomedical Waste Management System. Shija now has 680 direct employees and thousands indirectly. Shija is a teaching hospital for GNM, Paramedics and post graduate course (DNB) for Gen Surgery, Anesthesia and Plastic Surgery.

In his attempt to bring world class healthcare to this region he has been instrumental in the establishment of first State of the Art Blood Bank under PPP model. It is funded by North Eastern Council and Government of Manipur and managed by Shija. The said blood bank also has the facility of Nucleic Acid Amplification Test (NAAT) for the first time in Eastern India for earlier detection of HIV, Hepatitis B and C before blood transfusion. The bank is now the only NABH accredited Blood Bank in NE India. Oxygen Plant under PPP mode is under construction and will reduce the cost of medical gases to a great extends.

His passion towards his profession drove him to achieve various medical feats including Guinness World Record in April 2004 for successful excision of largest neck tumour (40 % of total body weight) in the world and also successfully re-implanted totally amputated hands for the first time in North East India in March 2000. Seven such replantations have been done so far.

India is looking east. Manipur shares its border with Myanmar. ASEAN Highway number 1 and 2 and railways are passing through Manipur to connect with the ASEAN nations. These are reasons for inclusive growth of the state. Dr Palin’s vision of international relation is through medical-tourism wherein people from different South East Asian countries may come to Manipur for healthcare reasons. On an average his hospital has been treating more than 100 foreign patients per month. The ecology, culture, landscape, people and history always attract people from outside the state and it must be a successful move to create Manipur a Healthcare Hub of South East Asia.

In his contribution towards the neighboring country, a team led by him started the venture of “Mission Myanmar for cleft lip and palate” in May 2013. 103 operations were performed on 87 patients during the mission. In continuation of its service to Myanmar, “Mission Myanmar for sight” sponsored by the Government of Manipur was performed by Shija Eye Care Foundation in December of the same year. The mission was also a successful one in which 178 patients with cataract blindness was operated. The missions have enhanced the goodwill between the two nations and specially Manipur and Sagaing. Shija is adding cardiac sciences, organ transplantation, joint replacement, anti aging medicine for medical  tourism.

This is a joint initiative of Smile Train Inc., USA and Shija Hospitals and Research Institute, Imphal. Since 2006, it has set on a journey to render free surgical treatment to cleft lip and palate patients changing many people’s lives. Cleft lip children are always facing the hardships of eating problem, social stigma, speaking problem etc and they don’t go to school and are dependent. SHRI goes along with the foreign based NGO and provide 40 minutes free surgery that could lead to a normal life to those children and bring smiles on their faces. So far more than 3500 surgeries have been conducted on children from Nagaland, Assam, Mizoram and Myanmar besides Manipur.

When asked about the feasibility of his vision he said “Future belongs to those who believe in the beauties of their dreams”.

Original Podcast is available at FindingTheVoices.com by MONICA INGUDAM  (Episode-39)