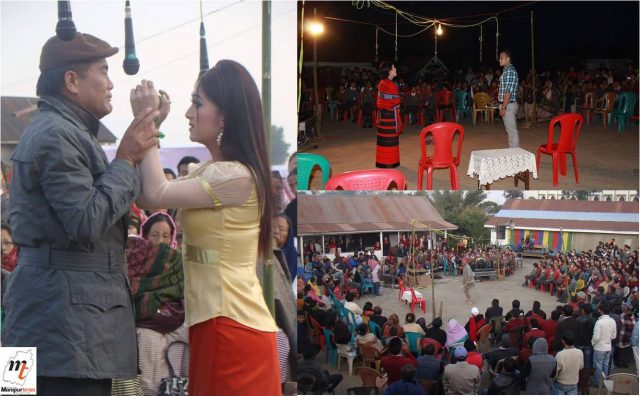 Athokpam Tomchou, a prominent courtyard playwright of yesteryear and later a Dramatist who won multi awards, himself says, he was very much influenced by GC Tongbra, and NK Sanajaoba, who without dispute is the pioneer of investigative journalism in Manipur. I tried conjugating what he said with what he scripted in Chagi Khuji. What I could comprehend about the form and content of his narrative technique is that it carries GC Tongbra’s legacy in form and that of NK Sanajaoba in content. In the Seminar on Armed Violence and Nationalism: Reflections in Manipuri Literature (6-7 March 2017), organized by Centre for Manipur Studies, Manipur University, Dr. M. Priyobrata, in the opening of the invited speakers session of this seminar stated that creative writers in the state, seemed to engage with the nationalistic theme very casually and lacks commitment, thus responsible for not emerging any authentic voice from the native creative writer. While saying so, his empirical base for arriving at such conclusion seemed to be limited only to poetry, short stories, novels, and at the most drama. In the last technical session of the said seminar, the moderator, Aribam Kumar Sharma stated very categorically that films and courtyard plays are a departure from the stated theme in the seminar ‘Literature’. I had this naive feeing that if our literary critic embraces, Shumang Lila, in the domain of literature, their search for ‘authentic voice’ would not be betrayed and unfruitful exercise.

NK Sanajaoba was also a founding Central Commitee Member of UNLF. Athokpam Tomchou, was imprisoned together with Late N. Pahari (Founder Army Chief, UNLF) and NK Sanajaoba, on the same charge of sedition in the late 1960s. Tomchou was later released unconditionally, as charges against him cannot be proved. ‘Chagi Khuji’ must perhaps be his first Court Play script, after his release from the prison. It would not be exaggeration to say, ‘Chagi Khuji’ obviously fits to be taken as the authentic voice from the creative writers of the state. Chagi Khuji, a very popular play in the early seventies of the late twentieth century, based on the hill-valley emotional unity and integration contextualized with the emerging Pan Manipur revolutionary movement was again staged by the Peace Maker Artist Association in 2014-15 and also marketed it in DVD format.

Thougam, the character on whom the play revolves was a rebel leader who carries a reward of Rupees One Lakh in his head. In the opening episode, the police led by Sub-Inspector, Ningheimo, at a hillock, not so far away from the Ukhrul town, came chasing Thougam with gunfire. From the dialogue, between Ningheimo and his subordinate personnel, it informs the audience that, the fugitive rebel leader have in the past resided in Siroi village for quite some time vocationing carpentry works. He went underground after the government started suspecting and investigating about him.

Analogize this with the emerging armed resurgence in Manipur in the post Irabot Manipur. UNLF, in its inception in the year 1964 had a multi-ethnic composition in its founding top rung leadership, with President from the kindred tribe of Zeliangrong Naga community, Vice President from the Kuki community, and General Secretary from the Meitei/Meetei community. And there have been stories that in those contemporary times, Mr. Bob Khathing, the most illustrious Tangkhul leader, was approached by the erstwhile, Naga rebel leader, Phizo, to join the armed Naga movement alongside with him, which the former, is said to have, declined if it was not for a United Northeast. Tangkhul, right from those days have been numerically preponderant and advanced community in Manipur hills. The founding top rung leadership of UNLF must also have wished to have Tangkhul among its ranks and files for the movement to be more inclusive, broad based, and plural. Some of them defected and formed the Revolutionary Government of Manipur (RGM) under the leadership of Oinam Sudhir, the Youth-in-Charge of UNLF, to whom the party leadership had great faith.  RGM started sending its members including many of the new recruits to East Pakistan in collectivity. Some of them were intercepted and got arrested and brought back to Imphal Police Station. From their leaks, many of the UNLF workers also began to be arrested. At such development, Samarendra went underground on July, 1969 and later became over ground after the General Amnesty by the Manipur Peoples Party led government under the Chief Ministership of Mohd. Alimmudin in 1974. UNLF didn’t start the armed campaign outright with its inception. Its activities in the early days were limited to establishing mass contact and mobilizing them for a favorable opinion to lend legitimacy to the cause advanced by them. In the period from later part of seventies to early eighties of the late twentieth century, many new groups emerged and outrightly started the armed campaign. UNLF too started the armed campaign with the commissioning of its armed wing, the Manipur People’s Army (MPA) in 1990.

The opening scene in fact mirrors the early days of armed resurgence in post Irabot Manipur focussing more or less on mobilizing masses, which, according to some, remains an unfinished agenda. This was also collaborated when Thougam revealed his identity to Lily on the day of her marriage in the concluding episode. He gifted her a Nongthrei Pareng (Carnelian beads necklace) which was gifted to him by his wife, Singhorla. After knowing that Thoungam is his biological father, Lily asked him why he deserted her and her mother and why Police are after him.  He further revealed he came to her hills, as cadre of an armed revolutionary group to mobilize the hill brethren for the movement launched by the group and still carries a reward at his arrest.

The subsequent scene introduces Nongpok, Lily and Khomei to the audience. Nongpok, a Meitei bachelor, got landed in Ukhrul town to join his new posting as a Clerk of Public Works Department. There, he first met Khomei, who have been residing at Ukhrul doing menial jobs for his livelihood. While Nongpok and Khomei was busy talking about the pleasant weather and warm hospitality of the land and the people, Lily came walking carrying a Sam (Traditional Vintage Tangkhul Backpack Basket). Nongpok got completely mesmerized and was pleasantly awe struck by her beauty.

The scene that followed opens in a household setting with the maternal grandfather of Lily, Luingam, thinly splitting the bamboo for making tying strips. In it Luingam, while talking to Khomei, expresses the nostalgia of the bygone days, where he would often get invited and came for the enacting of ‘Tangkhul Nurabi’ in the performance of Lai Haraoba, which still is a mandatory practice. In the process, the play hinted for reappraising the shared history and cultural oneness among the native communities in the hills and the plain.

Lily makes known her love for Nongpok to Khomei. Luingam while talking to Khomei revealed that Lily’s father is a Meitei. Further, he said,  he together with her granddaughter moved out from their ancestral Shiroi Village, fearing of her granddaughter being ridiculed due to her different lineage. Lily, didn’t approve of her arrangement for marriage with Ningheimo. She asserted, she, herself being a Meitei, would prefer to be reintegrated by marrying to a Meitei. When Lily came face to face with her father for the first time, she helped her father to steer clear of the trail by the police. This, she did without realizing him as her real father. An instant bond and close rapport developed between the two. The father went back promising to frequent at every opportune moment, but not before gifting a pair of plastic bangles and embellishing the same by him to her wrists.

Luingam, the maternal grandfather of Miss Lily also expressed his wish of Lily getting reintegrated among the Meiteis by marrying Nongpok. Ninghemo, a Tangkhul, who nurtures desire for marrying Lily also soothes himself and accepted the fate after learning Lily of prospectively marrying to Nongpok. Many of the courtyard plays dealing with inter community themes, often ends up with inter community marriage and the bride ultimately conforming to the community culture and life ways of her groom. Keishamthong Thoibi, can just be cited as an example.   But, in Chagi Khuji, the acceptance and approval of  Lilys marriage with Nongpok, a Meitei, by his maternal grandfather and Ningheimo, who also had love interest to Lily, gives the message that inter community harmony is not too simplistic an equilibrium that it can be okayed with inter community marriage. And that real answer is giving recognition and respect for each others uniqueness and identity and mutually accepting for what they are. At the same time, the playwright also did not disapprove of inter community marriage as Lily was borne out of the wedlock of Meitei father and Tangkhul mother. Nongthrei Carnelean Bead, are according to pre-christian Tangkhul are believed to emit the bearer, among others, the courage to move forward on a new path in life. Thougam, the father of Lily, chooses to accolade her with Nongthrei Pareng than any other with a mention that, it was the last loved gift he received from her mother. This Nongthrei Pareng implicitly symbolizes with great subtlety the unconditional support of her wife in his new mission in life which made him fugitive and the message of not forgetting her mothers root when Lily reintegrated to Meitei Society following her marriage to Nongpok.

In the concluding scene, Thongam, in front of SI Ningheimo, gunned down to death, Mr. Dilip Singh, who was involved in the triple murder of Ms. Sumila, Ms. Rosee, and Mr. Khomei. Thongam, after killing Dilip Singh, surrendered to Ningheimo. Thongam, obviously referring to the destroying of material evidences which could implicate Ms. Lily to the killing of Sumila, appreciated Ningheimo for his selfless deed. Thongam offered himself to be handcuffed which Ningheimo refused. The play ends with Nigheimo stating his respect for Thoungam and suggestively requesting him to go with dignity. Thoungam, as portrayed doesnt seem to be a top level functionary of the armed rebel outfit for which he is a member. Accordingly, Thougams surrender doesnt signify the end of armed revolutionary movement in Manipur.