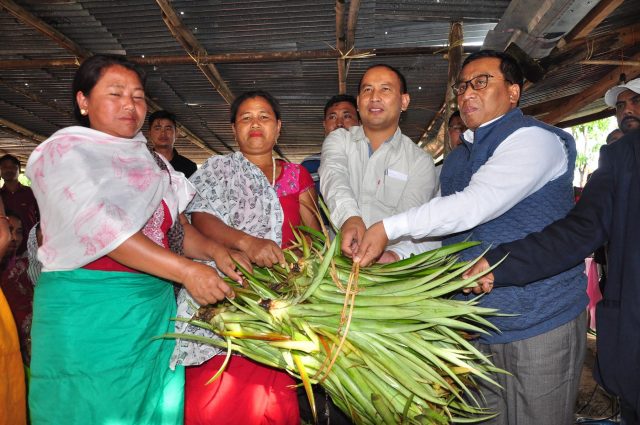 Imphal, June 3, 2017 (DIPR): Horticulture and Soil Conservation Minister, Shri Thounaojam Shyamkumar today said that, departments under him mainly Horticulture & Soil Conservation and Forests & Environment will address queries/applications put up by the farmers/villagers within 24 hours without wasting their valuable time.

Minister Th. Shyamkumar was speaking as the Chief Guest at a function where free pineapple suckers were distributed to the farmers of Tamaram village under Keirao Assembly Constituency. He was accompanied by L. Rameshwar, Parliamentary Secretary (IFCD), who is also the MLA of Keirao.

He further said that, under the dynamic leadership of Prime Minister Shri Narendra Modi at the Centre and Chief Minister Shri N. Biren Singh in the State, various departments mainly Horticulture & Soil Conservation Department, will work for promotion of farmers in all the districts. He said the department is planning various welfare programmes for the farmers and guaranteed that more funds will be sanctioned for the promotion of pineapplefrom next year. He further said that, the department is also aiming to promote a market for exporting pineapple from the State.

Minister Shyamkumar voiced his concern over the rapid depleting forest cover of the Tamaram village. He said the government will organise tree plantation in the area in consultation with the local MLA, and urged the local residents to wholeheartedly take part in the plantation drive. Expressing concern over the nature’s fury faced by the State in the recent time, Minister Shyamkumar said, monetary help will be provided to the locals for the protecting trees to safeguard the environment.

The Minister also urged the locals and farmers of the village to plant other varieties of trees, including Yongchak. The Minister said that the government will plant trees in mass scale in the month of June and July after the end of Manipur Legislative Assembly Session. He further said that, the government is ready to support the farmers of the entire State. The Minister assured the Tamaram villagers that the developmental works including drinking water facility and construction of community hall will be taken up soon in consultation with the local MLA. (DIPR)