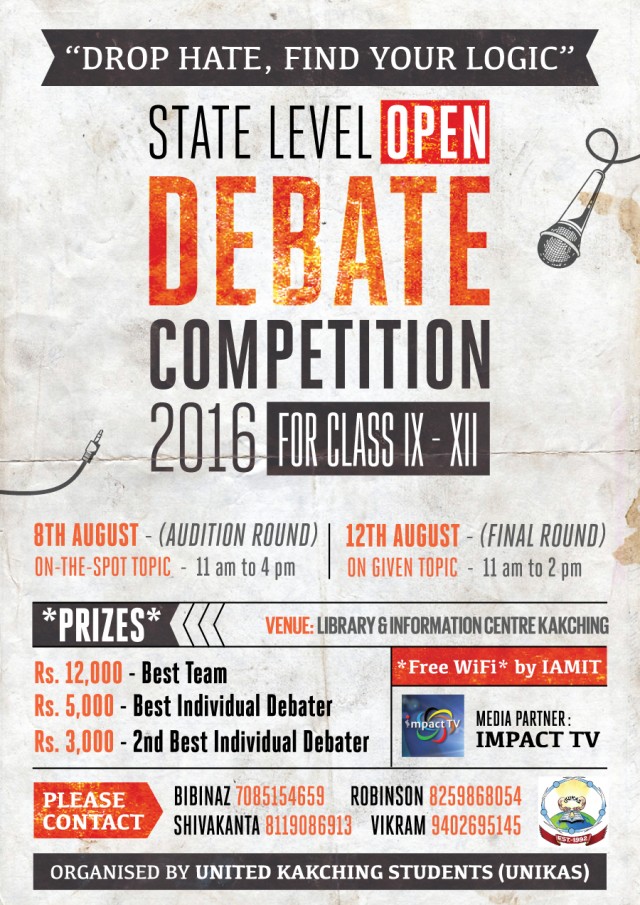 “The smart way to keep people passive and obedient is to strictly limit the spectrum of acceptable opinion, but allow very lively debate within that spectrum-even encourage the more critical and dissident views. That gives people the sense that there is free thinking going on, while all the time the presuppositions of the system are being reinforced by the limits put on the range of the debate.”

Wrought interrogation on the young curious minds in general has been created a culture in Manipur for decades now. Should setting limits to their thought ranges even be an option? Have we envisaged the myriad reaches of our young creative ideas? Perhaps it’s time to nurture and appropriately channelize their unattended disavowed voices, wishes and desires by facilitating a conducive environment for wilful explorations. Acknowledging the need for a platform for students of Manipur to think critically and speak their mind constructively without hesitation, United Kakching Students (UNIKAS) is taking this initiative to organise a debate competition as a community outreach program on larger current issues of Manipur to be held in the second week of August, 2016.

This initiative came with the thought of encouraging young enthusiastic school students who are struggling hard to push their voices through frequently interrupted education journey due to various socio-political and ethnic circumstances in Manipur. This event is envisioned to facilitate high school students to ponder upon and debate over current issues annually. Such program aims to inspire young minds to think critically, raise their concerns appropriately with humanity and be better responsible citizens who could initiate positive changes.

Feature of the event

This debating competition is being organised merely by our students’ body without any institutional and political collaboration. However, the organising team has been privileged by few generous sponsors and well-wishers who willing extended their support to make the event successful. We believe that this event is only a beginning of what has been sighted with great hope to instil the culture of openness, receptivity, free thinking and harmonious co-existence in our society.