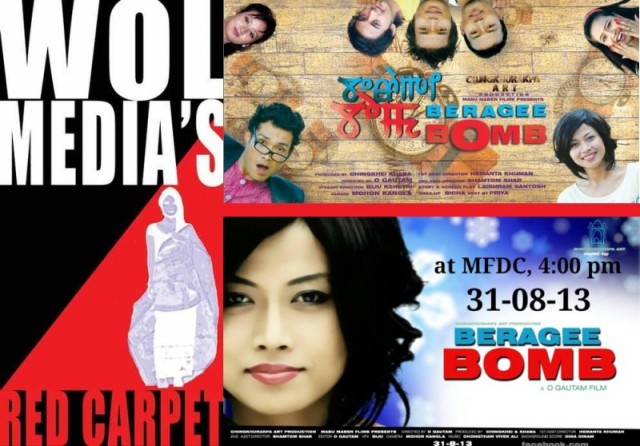 For the first time in Manipur, WOL Media will be hosting the first ever Red Carpet event in Manipur, Premiering the new movie “Beragee Bomb” on the 31st of Aug, 2013 at MFDC.

This will be the onset of a Red Carpet trend in the movie industry of Manipur, aiming to glamorize the trade and the art of movie making. This idea was aimed to promote and globalize the concept of Red Carpet with a traditional touch, which will provide a fertile ground for our fashion industry to take shape, for new artists to promote themselves and give the existing ones a tint of glamour. Not only this, it will give a chance to understand more about the artist’s personality and give chance to public specially the fan or we can say the audience to interact with the film stars and many celebrities.

And in the Red Carpet event, the media person or simply the journalist play an important role, without them there will be no success for the evening. The media person will reflect the significance of the evening, for example the new design worn by the celebrities will be reflected to the general public and encourage the economy of the state. And the media report that celebrities or the film artist will express his idea of the film world, fashion and for the new work or the new film. It will also give chance to new artists to showcase his upcoming film and his or her desire to express to enter in the film world. And encourage the artists to learn the basic ideas from the senior artists and it will show them how to dedicate, sacrifice and honor the film world.

It will also give chance to singers and fashion designers because playback singers plays an important role in the film industry, without them there will be a hollow everywhere, simply we can say the singers makes the audience or fans enjoy the taste of the songs in the film. The singer can promote his or her upcoming songs in the Red carpet event. And for the fashion designer, we can say for them the evening will make the bomb blast. The designer will try to show his/her new design worn by the celebrities and it will make them success in the fashion world. It will also promote his/her new design, bringing good economy to the state.

For the clear understanding for the people of Manipur, what does Red Carpet mean we can simply say, a Red Carpet is traditionally used to mark the route taken by the Heads of the State on ceremonial and formal occasions, and in recent decades been extended to use by VIPs and celebrities in formal events. A Red Carpet is also used in Gala celebrity events such as the Academy Awards, Met Ball and BAFTA. While the awards takes place inside, much of the publicity and excitement takes place outside with journalists discussing the Red Carpet fashions, what designers are being worn by which Stars and photographers taking pictures. This is now a spectacular international product placement arena of great importance to the fashion industry. Red Carpets are often coupled with publicity backdrops which contain brand logos or emblems for photographic purposes. Carpeting in other colors may replace Red in some instances to honor a certain cause or for a sponsored event, the sponsor’s logo colors such as “Green Carpet” to promote environmental awareness, or for the Nickelodeon Kid’s Choice Awards, an orange Carpet is used instead to go with the network’s primary imaging color. Red carpets are now also used at non-royalty or celebrity events such as weddings. More generally “Red Carpet treatment” and “rolling out the Red Carpet” , prefer to any special efforts laid in the interest of hospitality.

And in brief history of Red Carpet, the earliest known reference to walking a Red Carpet in literature is in the play “Agamennon” by Aeschylus, written in 458B.C. when the title character returns from Troy, he is greeted by his vengeful wife Clytemnestra who offers him a Red path to walk upon.

Oriental carpets in renaissance paintings often show rugs and carpets, patterned but with Red often the main background color, laid on the steps to a throne, or on a dais where rulers or sacred figures are placed.

A Red Carpet was rolled out to a river to welcome the arrival of United States’ President James Madison in 1821. In 1902, the New York Central Railroad used plush crimson carpets to direct people as they boarded for 20th cent. Lmt. Passenger Train. This is believed to be the origin of the phrase “Red Carpet treatment”. Film premieres are often laid down with Red Carpets.

Unrolled carpets can be potentially hazardous. In 2010, when Pope Benedict XVI arrived at airport, in strong winds for a state visit to Britain, the Red Carpet was removed on health and safety grounds.

We have interviewed many film stars of Manipur for this event and they have told us that such event is rare in Manipur and filled with surprise for organizing this event for the first time in Imphal. Some of the male actors like Kaiku, Sadananda, Bonny, Gokul etc has expressed their views for this event and they feel like they are touching the limitless sky and feel great and surprised. And they have told us that the carpet event will make them feel honored to walk on the carpet.

The interesting statement by the renowned film star of Yaiskul Pakhang Angaoba Yo Sanatombi aka Bonny has expressed that in his 5yrs career in the Film industry, his “unfortunate” legs has never walked on any Red Carpet (event) but this time he feels lucky that he is getting such an opportunity to walk on the Red Carpet which is oprganised by WOL Media with a premiere show on Beragee Bomb at MFDC.

And on the other hand, we met female actors of Manipur like Soma, Abenao, Tonthoi etc and they also expressed their eagerness to walk on the Red Carpet for the first time in Manipur and promised to be present and grace the occasion. They further expressed their different views about the event. So organizing such an event will surely bring about new changes in the Manipur Film Industry and also give a great economic boost.

This article is submitted to Manipurtimes by Renuka Soraisam, WOL Media