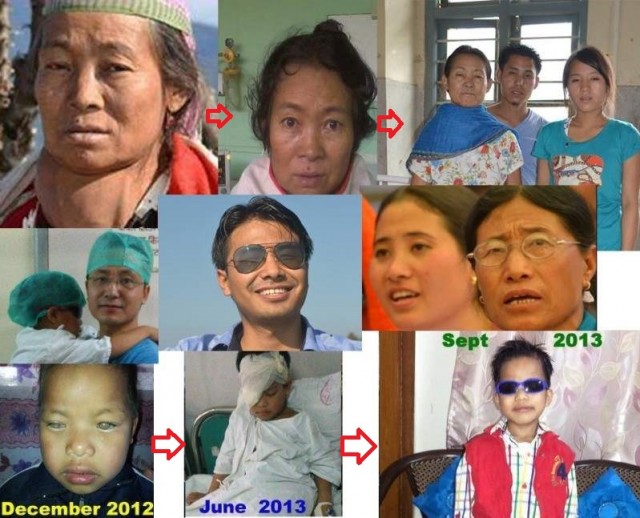 Though the People’s Road that we all constructed so enthusiastically might take some more years to see a completion, we have to move beyond the road project.

Seeing the tears of joy in the eyes of the people at the road’s inauguration both at Katangnam and Njunkuak, the feeling of joy and excitement can never be forgotten. It gets written in the hearts of everyone present there to do better and move forth in life and continue to hope for the best that is to come.

A lady with World’s largest goitre and treatment

It was at Katangnam’s village when my brother Jeremiah, Derek and Raja Silthou (from ADRA) visited in the month of November 2012. A lady with one of the biggest goitre came up to welcome the visiting team. She came up happily to meet them but with her head and neck covered. It was a little surprising for them to see her covered up. Her voice was barely audible. It was then that Jeremiah asked what her problem was. She shyly replied that she had been suffering from goitre for the last 8 years. On being asked why she never went for any treatment, she said she went to Tamenglong two years back. She was advised to go to Imphal. But she decided to go back to her village as she had no money for the operation. She and her husband have to take care of their children’s education and food.

Jeremiah asked her to come to Tamenlgong. She walked for two days and then was treated at Tamenglong for a week. But since operation facilities weren’t available in Tamenglong she was referred to Imphal. It was here that she spent for another 3 months from February to April. As she was facing this problem for a long time, she had already developed a breathing problem. The doctors were scared to directly operate on her as there was limited facility at the medical centre.

After three months of medication, finally, the goitre operation was conducted in April. 9 units of blood were utilized in over 3 and half hours of operation. When we ran short of blood unit, three people who contacted us over Facebook came rushing to us to donate blood. When we still needed more, I too had to donate though I wasn’t very healthy that day after travelling for a long time. The best possible team of doctors led by dr. Micholah Lyndoh conducted the operation. Now post operation, she is fine and has gone home to be with her family and her villagers.

Another classic case of impossibilities was taken up when I visited a village called Nzingning. This village is still not motorable and hence I had to walk on foot for over 4 hours to reach their village. During my interaction with the fellow villagers, one middle aged man walked up to me with a small boy and asked me if I can do anything about his 6 years old son who went blind at the age of 3. I advised him to be taken down to the district hospital.

But it was almost an impossible case to be treated at the district hospital and even at the best hospital in the state. So after seeking opinions from different doctors mostly over Facebook it was decided that we are going take him to Delhi to give him the best possible treatment with everyone’s help. While waiting we kept him at the blind school here in Imphal for almost a month.

We took him to Delhi in the month of April. Without any assurance of finance and help we decided to put everything on the line and with faith and trust in God and in the goodness of humanity we preceded on to start this humungous work of trying to restore his eyesight.

With everyone’s support we started the process of restoring his eyesight. Help in the form of finance came about; there were people who also supported the boy by bringing food. The best was when people were coming and spending the night at the hospital with the boy.

My sincere thanks to my sister Pourei. She helped me till the end. My brother Jeremiah and his wife Avitoli did all the running around and arranged for everything possible to make this treatment possible. Further, it becomes even a harder task when one has to spend the nights in hospital with Diliawangbe. Here people like Rachubuipame, Iralu, Nehemiah and many more had sacrificed lots of their nights to take care of this boy. The doctors and nurses at Aiims, Delhi had been extremely great in the entire treatment. They gave their extra time to see that operation was done safely. The boy is now back at home. He can now see figures. As per the doctor’s advice post cornea transplant it takes time to adjust with the new cornea. So we are all hoping that one day he will be able to see the world again.

It was yet another challenge when some of the old people asked us when in one of the village visit if we could do anything to restore clear vision. I thought it was such an odd request but they are old and didn’t know much. They still have this concept that their saheb (boss) can do anything. So on my way back I started thinking what can possibly be done for their request. It was at this time that we started contacting the state government and also some NGOs who deals with all of these.

An NGO called the Sight Savers deputed two ophthalmologist for a week, and over these periods they toured over 15 villages mostly on foot. They conducted eye camp and identified all the issues related to vision defect. Having identified people who needed cataract operation we then started the process of how to go about the operation. At this stage the Manipur state blindness society was contacted. In collaboration with Shija Hospital, Imphal operations were carried out. Over 36 old people were operated. Here credit should go to the Shija Hospital’s chairman Dr. Palin, the doctors who conducted most of the operations Dr. Scahin and Dr. Ramesh. Further it would be incomplete without thanking the local MLA, Shri. Z. Kikhonbou for letting people stays at his quarter here in Imphal.

The entire process was a very difficult one as most of them are very old people and they have to be lifted from their villages and dropped back after operation. The Heritage Foundation, an NGO headed by the Secretary General Dr. Roopa Vohra funded a portion of the transportation cost. This NGO was referred to by Col. Tapaash Chatterjee who is so involved with the ability beyond disability mission.

When all of these things were taking place another interesting thing happened at our village called Impa. With barely a motorable road from about 57 km from the district headquarters, a health camp was organised. One of the best doctors in the country came from Delhi. Dr.Asha of the Max Hospital was there in the village for 3 days treating almost over 200 villagers from the neighbouring villages. A 4 members team of SRL diagnostic centre from Imphal also came to the village with all the testing kits. They conducted test for HIV, Hepatitis B,C, and blood group and sugar level amongst other tests.

It was at this medical camp that we decided to set up one permanent health care centre in our village. We have engaged one nurse to stay permanently in the village on payment of Rs. 10000 per month as her salary. Now a nurse is permanently stationed there and along with some basic medicines she is taking care of the basic needs of the village.

A wish for the Future

This road project has shown to the rest of the world, one of the most backward areas in the country to limelight. There are so many people inquiring what and how is the area. There are journalists from within the country and beyond who wants to visit the place. There are lots of people willing to know more and do certain things for the people of this area.

We hope the little things that have been done thus far would take the area forward. This area has a great potential in every spheres to make it as one of the best possible places ever in the entire country.