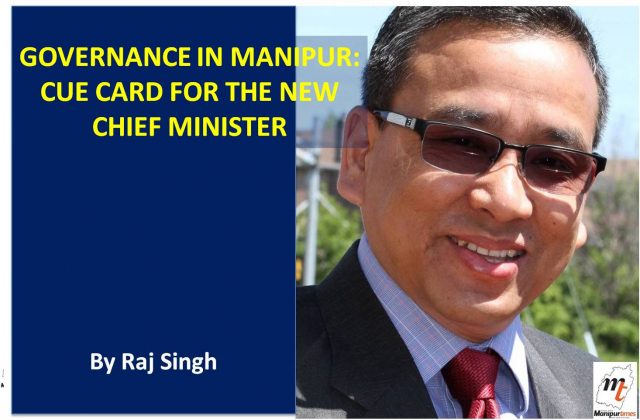 After pestilent electoral campaigns of an unprecedented scale playing on highly sensitive issues, finally, Manipur is set for a new coalition government with a new Chief Minister. The new Chief Minister inherits a fractured Manipur and faces challenges of rebuilding it with a team of colleagues of uncertain veracity.

In Indian democracy, often, election manifesto is more of a wish list of things for political parties used to woo voters. Not much is expected by the people from manifesto as the fanciful promises in the document are seldom kept and the document is hardly reviewed during the term under rule of the party.

In the hung assembly situation in Manipur this time, the multi-party coalition government must develop a common minimum program as a compromised document of to-do-list kind, accommodating the not-so-congruent ideas of the different parties that are conditionally in temporary league. The document will leave behind much of the original promises of the participating parties to oblivion.  The document will also help the parties find excuses for distancing themselves from some of the tall promises about which they did not have much clue. Since election is over, there will be no need for the coalition parties to sell the ideas of this new common manifesto to the electorate. The document will be more of a binding contract for the parties to work in cohesion rather than a coherent document to dovetail actions precisely targeted at governance goals.

How deviant the common minimum program from the manifestos of the parties will not be questioned by anybody. But, essentially, in this dire situation of Manipur, the new manifesto must address the problems of the people in the state that earned for the state sobriquets of badness.

Listed below are some hard facts that surfaced while washing the dirty linen during electioneering.

Paradoxically, this state outperforms many other states in education, sports and creativity. The state boasts of the swarm of meritorious students graduating both from its own universities and from elsewhere; it is the breeding ground of sportsmen and sportswomen for India; it is the big natural workshop of theatrical and cinematographic productions, some reaching the zenith of creativity.

The state is unquestionably one of the cradles of civilization in the world with its two millennia old history, royal lineage, full-fledged language with scripts, literature, epics, chronicles, folk and classical art forms, martial arts and institutions of governance etc.

The state holds much promise to progress with its excellent agro-climatic regime, natural resources, human resources, opportunities for modern industrial productivity and prospects of international trade and commerce with the advent of the Act-East Policy of India.

In this scenario, one feels standing on a precarious balance of two utterly opposing psyche,

Everyone sees the society veered into the ditch of cynicism and feels the urgency of steering the population away from it. Similarly, the political parties also see the problem and use it in their blame-game to demean adversaries to their own advantage without a sincere commitment to find solutions.

Sometimes, political parties do not want to be sincere in their commitments to avoid getting trapped by their own words after winning. Instead, they want to play with some generic eye-wash blandishments without specifics of the solutions they promise. This article attempts to suggest some of the obvious specifics of the solutions that manifestos hid from public eyes during electioneering so that the new Chief Minister who strives to be the champion of harmony and growth in this strife-torn state may have a cue card handy.

The Cue Card points of solutions for problems:

1. The manifestos have already said in unison – Manipur will be Clean Governance in the state. Now, the Chief Minister needs to say:

2. The manifestos have promised public safety and security.        The Chief Minister needs to list in his action plan,

3. The manifestos have promised territorial integrity of Manipur. Chief Minister needs to promise actions for,

These are just a few of the cue card points presented to illustrate how sincerity and clarity can be deployed in identification of problems and solutions in the state. The list is by no means exhaustive or even accurate. We have already an elaborate paraphernalia of clean and progressive governance sitting in the shelf like an unused sophisticated toy covered by dust. The new Chief Minister needs to bring it off the shelf, blow off the dust, check all the moving parts and start using it. He will find the toy if he is not blinded by the mundane political business. We must trust, his ingenuity and sincerity help will him invent new methods of training people’s mind for oneness – a state of mind for perfect harmony and progress. That is the “change” promised.