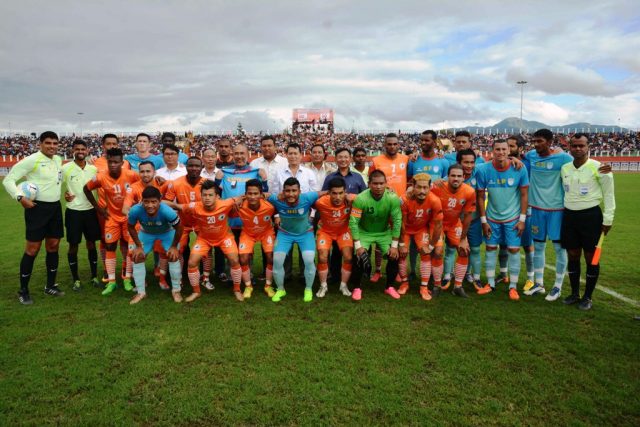 Imphal, October 22, 2017 (DIPR): Chief Minister Shri N. Biren Singh said that the government is committed to increase the seat capacity of the Main Stadium of the Khuman Lampak Sports Complex from the present seating capacity of 25,000 soon. This was stated by him at pre-season friendly match played between NEROCA FC, Imphal and NorthEast United FC held at the Khuman Lampak Main Stadium, Imphal today.
Speaking as Chief Guest of the match, Chief Minister said that the Main Stadium Ground is being developed into the football field of International Standard with natural grass turf fields so that the State could host to various International football matches in future. Seeking encouragement and support of the people, Shri N. Biren Singh said that the State Government would develop 2-3 playgrounds by laying astro turf (artificial turf) in the State soon. The government is also planning to install Flood lighting system in the Main Stadium soon so that football matches could be played during night time too, he added.
Chief Minister stated that we are expecting at least 8 players from Manipur would be in India squad for U-19 football World Cup like that in U-17 World Cup.
Mentioning the culture of sports and love for football in the State, Minister for Youth Affairs and Sports Shri Letpao Haokip said that it wouldn’t be wrong if we called Manipur as “Sports City” of the Country. He further stated that the government would work its level best to improve and develop the football infrastructure to promote and produce good football players in the State.