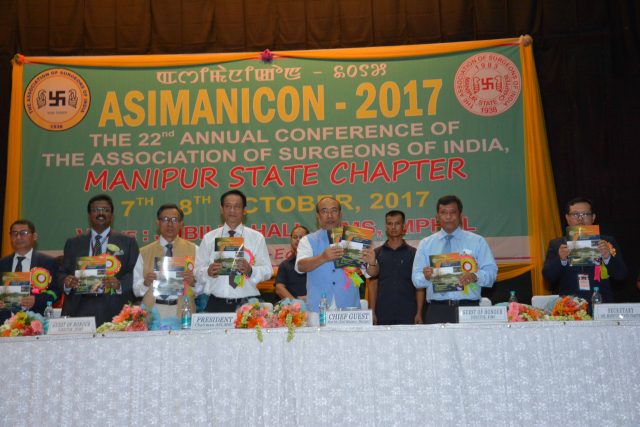 Imphal, October 7, 2017 (DIPR): Chief Minister Shri N. Biren Singh has urged the medical fraternity to empathize with patients and their worried parties while discharging their valuable services.
He was speaking at the inaugural session of the 22nd Annual Conference of the Association of Surgeons of India, Manipur State Chapter (ASIMANICON – 2017) at RIMS Jubilee Hall today.
Urging the medical fraternity to keep up the spirit of humanity and kindness which are the true traits of a healer, the Minister also stated that the Government would not tolerate any harassment meted out to health personnel and damage caused to medical properties.
As suggested by some doctors, the Government would consider enactment of an Act which would protect medical personnel and properties soon.
The Chief Minister said that the State Government is planning to introduce a health insurance scheme to benefit the poor and vulnerable people.
Maintaining that problems related to health have a critical impact on the development and prosperity of the country, Shri N. Biren expressed hope that the outcome of the conference would help in policy formation of the Government in this regard.
The Chief Minister also assured that he would do whatever possible in his capacity to ensure that shortage of infrastructure and technologies do not come in the way of providing quality healthcare to the people.
Shri N. Biren said that the medical fraternity of the State needs to embrace modern technologies without losing human touch in the process of dispensing their services. He also expressed hope that the State medical fraternity would help realise the goals of the Government in the field of medical tourism in the near future.
RIMS Director Prof. A. Shanta, JNIMS Director Prof. Th. Bhimo, Association of Surgeons of India (ASI) Honorary Secretary Dr. Ebenesh Bensam and ASI Manipur State Chapter president Dr. Kh. Palin also attended the function as presidium members.