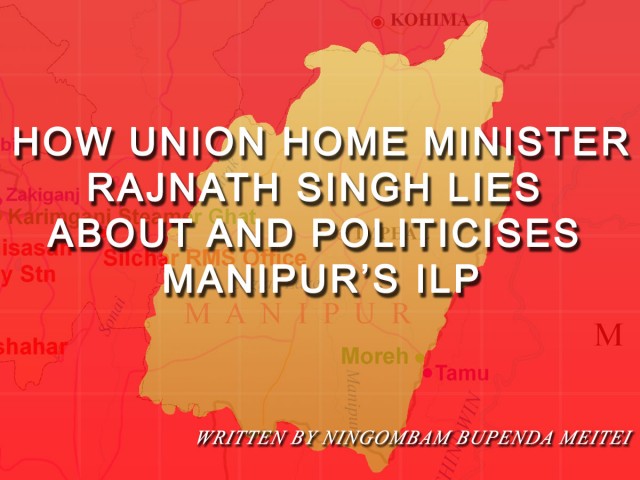 In Zee News India, dated 6th June, 2016, “Rajnath unhappy over Manipur anti-migrant bills being ‘politicised’”, it states that: “Union Home Minister Rajnath Singh expressed his unhappiness over the way the issue of anti-migrant bills of Manipur, awaiting presidential assent, is being “politicised”.”

The question which can be put to Rajnath Singh is, “Is the Union Home Minister of India not expected to know and publicly and officially declare the status of the Manipur’s 3 bills which are kept pending and lying in New Delhi in Modi government for the last 9 months?”

How the Union Home Minister lies about Manipur’s ILP

In “CM never sought appointment with Home Minister”, Imphal Free Press, dated 6th June, 2016, it states that: “Taking serious note of the issue, the Home Minister who was reportedly at Pathankot till late night returned back to the National capital to discuss the ILPS issue.”

In “Pathankot attack probe: If NIA not allowed to visit Pak, it will be betrayal, says Rajnath Singh”, The Indian Express, dated 5th June, 2016, it states that: “Addressing the gathering as part of “Vikash Parv” in the wake of two year completion of the Narendra Modi government, the Home Minister claimed that in last two years, the country has achieved the GDP growth of 7.6 per cent which was commendable.”

In today’s The People Chronicle, an English daily in Manipur, dated 6th June, 2016, in its headline news “Intense lobby for ILP: State BJP delegates meet Rajnath, Rijiju”, there is a sub-headline under it which says “Rajnath dashes back from Pathankot to meet team”.

The manufacturing and inventing of news item to show the seriousness of involvement of Union Home Minister is by making a sub-headline “Rajnath dashes back from Pathankot to meet team”. It appears that the Home Minister, who has not stated anything officially on the status of the Manipur’s 3 bills for the last 9 months, came suddenly straight away from Pathankot of Punjab, India to New Delhi to only meet BJP team from Manipur to have a cup of tea and a photo session without anything substantial and official reply on Manipur’s 3 bills from the Union Home Ministry. The reality is – the Union Home Minister went to Pathankot to address the gathering as a part of “Vikash Parv” in the wake of two year completion of the Narendra Modi government. Rajnath Singh was there as a part of his party’s function which was celebrating the two years’ completion of Modi sarkar and his visit to Pathankot is also published in BJP’s official press release on its party website. He, indeed, went to attend “Vikash Parv” and not to discuss about the failure of Modi government to ensure the entry of NIA to Pakistan to complete the Pathankot probe, where Modi government has allowed the visit of Pakistani team to Pathankot while Pakistan has objected to the inclusion and arrival of Indian team to Pakistan to investigate the Pathankot terrorist attack.

But, in Manipur, BJP portrays that Rajnath Singh even had to leave Pathankot for Manipur, but the point is – he went to Pathankot not for Pathankot attack probe but to attend his party’s function. So, trying to project that the Home Minister has left the national issue of Pathankot by leaving Pathankot and rushing back to New Delhi for discussing Manipur’s 3 bills is misleading, and that reflects the seriousness of Rajnath Singh, which is as good as saying that nobody in Manipur or from Manipur actually knows what Rajnath Singh was doing at Pathankot – whether he was in Pathankot for Pathankot terrorist attack probe or for his party’s function to celebrate 2 years of Modi sarkar. This attitude of BJP is a clear example to prove that BJP has genuinely no interest in the Manipur’s 3 bills and implementation of ILP in Manipur. The photo session of the leaders of BJP, without giving any official statement from Union Home Ministry, is a clear justification of the hypocrisy and epitome of lies of BJP towards the people of Manipur.

In “Ibobi orders inquiry – Cabinet takes step on Churachandpur flare-up”, The Telegraph, dated 6th September, 2015, it mentions that: “The Okram Ibobi Singh cabinet today decided to order a magisterial inquiry into the flare-up in Churachandpur town against three bills passed recently by the state Assembly, leading to the death of eight protesters.”

In “Ccpur JAC not to allow magisterial enquiry; wants probe by Central government”, Imphal Free Press, dated 22nd September, 2015, it states that: “The enquiry is set to begin and concerned officials are slated to come on the September 23 to Churachandpur to begin the enquiry. The JAC said the people will not accept any enquiry initiative by the state government. Instead, the enquiry must be instituted by the central government.”

In the same news, it also states that: “With the unrest over the demand for a Separate Administration for the tribals of Manipur not abating, the a top government official, MH Khan, IAS, Principal Secretary, came to make an assessment of the actual situation on the ground. Earlier, when Khan’s vehicle approached the gate of DC resident, his convoy was blocked by womenfolk who also snatched the order appointing him lead a Magisterial enquiry in the incidents that led to the police firing in the district headquarter in the wake of the violent street protest against the passing of three bills ostensibly designed to prevent influx of migrants into the state by the State Legislative Assembly on August 31.”

In “MHA special secretary appeals for early resolution to face off”, Imphal Free Press, dated 23rd September, 2015, it states that: “The union Special Secretary, Internal Security, Ministry of Home Affairs, Ashok Prasad visited Churachandpur today to take stock of the situation in the beleaguered township. Prasad a former DGP of J&K was given a warm reception by the Churachandpur public at Kangvai where he was given a memorandum by the Chief’s association of the district.”

Despite the 3 bills being passed unanimously by Manipur Assembly, Manipur Chief Minister Ibobi Singh, being a democratically elected Leader of Manipur, through his cabinet, decided to order a magisterial inquiry into the flare-up in Churachandpur town against three bills passed by the state Assembly, leading to the death of eight protesters. The magisterial inquiry was headed by the then Principal Secretary M.H. Khan of Government of Manipur. But, neither the Head of the inquiry nor the Deputy Commissioner of the district concerned had an opportunity to institute the inquiry as both were stopped violently and made to return back. The government official vehicles were destroyed and ultimately the Principal Secretary had to come back to Imphal without completing the inquiry.

With the photo session over a cup of tea with Union Home Minister and BJP leaders of Manipur, without any official statement from Union Home Ministry, and with a deliberate false portrayal of Rajnath Singh’s rushing back to New Delhi from Pathankot to discuss Manipur’s 3 bills, and sending of the Special Secretary from Government of India to hear instead of waiting the inquiry report by the Principal Secretary of Government of Manipur, and silence of Modi government towards the status of Manipur’s 3 bills which are lying in Modi government for the last 9 months, the genuine seriousness of Prime Minister Narendra Modi is strongly doubted and this justification of the existence of the doubt is clearly exposed by the lies and politicisation of Manipur’s 3 bills and the failure of implementation of ILP in Manipur by none other than the Union Home Minister of India.

How long will Modi government keep the Manipur’s 3 bills in New Delhi and play politically with it before Manipur’s 2017 state assembly election? When will the Union Home Ministry of India officially state and release an official press release, through Press Information Bureau, on the status of the Manipur’s 3 bills?