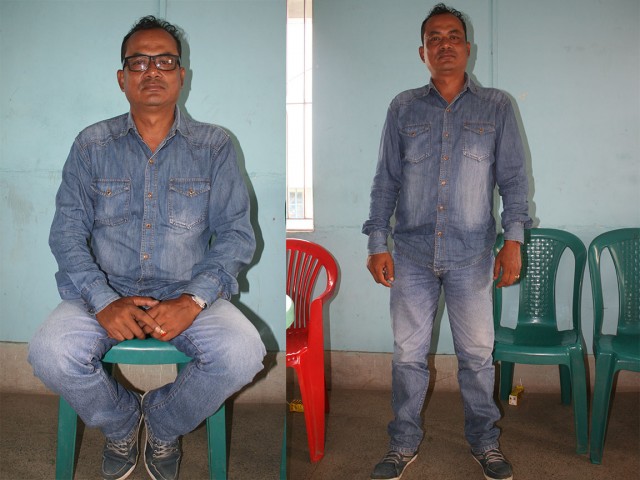 Laishram Jiten is the eldest son of Late Laishram Tomchou and Khomei Leima of Kontha Ahallup Mayai Leikai. He started his artistic career in singing in 1982 under late Inakhunba Langamba of Luwangshangbam, a AIR Lyricist. Inakhunba was instrumental in producing his debut music album Kala Toubi Iteima released in 1984 when he was in class VIII standard.

As a playback singer of Shumang Leela

Prior to his entry in the world of music, Jiten was learning dance at his locality and met Inakhunba. Inakhunba who knew Jiten’s talent in music, suggested him to learn music in a formal music college. He got admitted in Government Music College in 1982 and completed Bisharat degree in 1989. While he was learning Visharat in Government Music College, he joined in Shuamng Leela Parties including World Artiste Union, Jupiter Artistes Association, Panthoibi, Drubatara as a play back singer in 1986. Since then, he has been singing as a playback singer in many Shumang Leela plays.

“Art is not a simple thing. It is expression of life. Budding singers should devote to the art they opted for to gain success.  Singers who confine themselves to one form of music cannot be a successful artiste. They should explore music in many possible ways as they could. They should learn to compose their own music and become independent of others”, he said.

His new venture in Music

His heart was seriously hurt when the orchestra group Mahabharat got split due to differences among the members. Leaving the group, he set up Tamna Institute of Music and has been providing training to many students.

As a music director in Manipuri digital films

In 1991, he made his debut as a music director in a Manipuri digital film “Best Friend” directed by Sanou under Ching Tam Film banner. So far, he had worked as music director in about 10 films like Mongpham, Nongalakpa, Aruba Echel, Chatloko Nungshiba, Washak, Mangla Taibangla. As a music director, he is working in six films waiting for release schedule.

Jiten’s artistic work is not limited to music composition and singing only. He has started his venture on making films too. Under his direction, two Manipur digital films Mirem and 2030 are on hectic shooting. His Manipuri film “2030” depicts the possible extinct of indigenous people due to unrestrained of non Manipuris in 2030.

“The contemporary music tune/lyrics are different from that of the past. In past, music expressed a theme by referring to nature while the modern music expressed directly. It reduces the aesthetic beauty of music”, he said.

Jiten is well expert in playing musical instruments including Guitar, Tabla, Dholop, Key board and Flute. One of his unique talents in music is that he can sing in both male and female voice.  Once he alone presented duet song in GM hall which surprised audience. Singing duet song without female singer was acclaimed. Jiten used to sing both male and female voice in Shumang Leela shows when the female singer was absent due to illness.

Music is an art of sound in time that expresses ideas and emotions in significant forms through the elements of rhythm, melody, harmony, and color. Music provides a positive effect on one’s mind. It has the power of healing certain ailments, a calming effect on the mind. It helps fight anxiety and has a soothing effect on the brain. Soothing musical notes help increase the Serotonin levels of the brain, thus alleviating mental depression. Music can make you cry, music can make you smile; it has a direct impact on your mood. How music affects your mood also depends on what you associate that piece of music with.