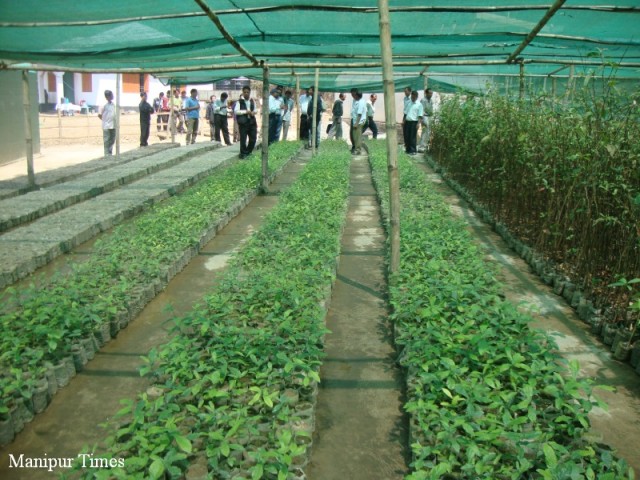 Green India Mission, an initiative of the Forest department that has been undertaking developmental activities like providing of sets of water pump, irrigation canals deepening to provide water to the dry paddy fields, renovation of local club and extending financial assistance to the poor womenfolk etc in the area. People now see a ray of hope of development in the village that was once deprived of such facilities.

In a recent survey conducted by Manipur Times, the villagers were found participating in the development works of the department in Keirao village. The villagers expressed their happiness on the initiatives of the government. The village is located at a distance of 7km towards the eastern Imphal along the Imphal Yairipok Road. Though not so far from Imphal, the village still has bad road connectivity, scarcity of drinking water, heath care facility, power and others.

The Mission (henceforth referred to as GIM )recognises that climate change phenomena will seriously affect and alter the distribution, type and quality of natural resources of the country and the associated livelihoods of the people. GIM acknowledges the influences that the forestry sector has on environmental amelioration through climate mitigation, food security, water security, biodiversity conservation and livelihood security of forest dependent communities.

GIM puts the “ greening “ in the context of climate change adaptation and mitigation, meant to enhance ecosystem services like carbon sequestration and storage ( in forest and Other ecosystems ), hydrological services and biodiversity, along with provisioning services like fuel, fodder, small timber and NTFPs.

Mission Aims :- Respond to climate change by a combination of adaptation and mitigation measures which would help enhancing carbon sinks in in sustainability managed forest and other ecosystem, adaptation of vulnerable species/ecosystems to the changing climate and adaptation of forest dependent local communities in the face of climatic variability.

“On a trial basis, for the first time, some funds under Entry Point Activities ( EPA) have been provided to the JFMC Keirao Awang Leikai. Under EPA funding two water pump sets have been stationed at Keirao Village to provide irrigation facilities. The river lifts irrigation at Keirao Awang Leikai once contructed by Minor Irrigation Department, Government of Manipur which is lying defunct for a pretty long time has been renovated with forest funding. Irrigation canals of length 700 meters leading to the paddy fields have been deepened with the help of the local people. The JFMC and the villagers equally worked on the deepening of the canals. The local club called ‘Irilbung Library Union’ located at  Keirao Awang Leikai, Imphal  have been renovated under  EPA funding. The floors of the club building have been cemented and the ceiling has been added. Works like providing irrigation facilities to the village and the renovation of club building are not sanctioned by the forest department. They are done according to the needs of the villagers. To address the need of the villagers, a PRA exercise was conducted at the forest office. After assessing the needs of the villagers, Forest Department takes up these development activities. Right from this year, farmers of this village will not face difficulties regarding shortage of water for their agricultural crops as the two pumpsets stationed presently at Keirao village would provide irrigation from the Iril river source” says L. Ranjit Singh, Range forest Officer, Nongmaiching Hill Range Forest in an exclusive interview with Manipur Times.

To uplift the living standard of the rural poor womenfolk, about seven women self help groups comprising 15 to 25 members each, have been provided yarns for handloom purposes. Those women who do not earn with weaving are provided with piglets. About Rs. 50,000 is provided to each self help groups. Out of this amount, 50 percent of the fund is provided as yarn, piglets, and poultry while the 50 percent of the total amount is deposited in the bank accounts of the concerned self help groups. The funds provided to them are purely grant from the Forest department so as the women can be self employed. JFMC will monitor the progress of these self help groups. Women groups need to utilise the money granted by the Government in an effective way. If the activities of the present JFMC are not successful, centre may cease further funding. The activities of Keirao JFMC need to be ideal to avail more funding to develop the village, says Ranjit.

He said that because of rampant felling down of trees, the world suffers a grave climate change now. Irregular Rainfall, global warming problems etc. are the impacts of climate change. To fight climate change with conservation of forest lands, India Government tries to save the forest through many approaches. Public participation towards saving forest and upliftment of village socio economic condition through various government sponsored schemes are the objectives behind Green India Mission.

As a part of micro plan of JFMC Keirao, nursery creation works will be taken up soon at Irilbung forest Range office complex. The plant saplings will be planted in the reserved forest areas of Angourok Hill,  Awaching Hill, Sagollok Hill and Kangamdabi Hill. Construction works like market shed, waiting shed, public toilet, renovation of local community ponds, levelling of village play ground will also be taken up according to the availability of funds, pointed out the Forest officer and appealed to people to  extend co-operation  to the government for successful completion of these works which the local people, later on, avail the benefits of it.