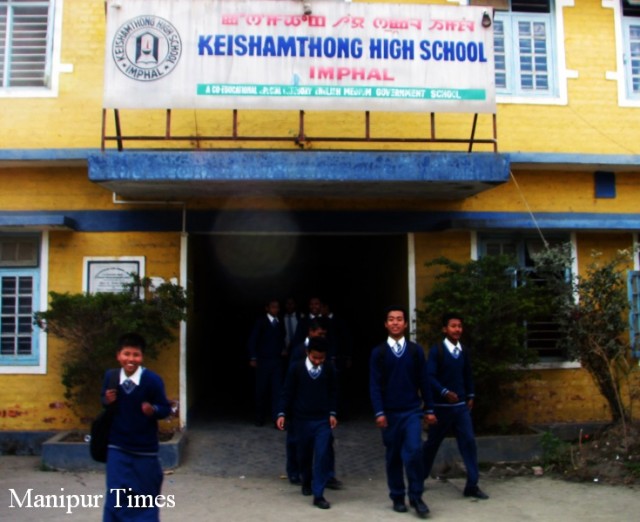 For many years, it has been a big question in the people’s mind why the well paid teachers of Government schools fail to guide even a few students to the list of position holders in the High School Leaving Certificate (HSLC) examination while their lesser paid counterparts of the private schools produce several position holders.

Parents are sending their children to private schools which charge high tuition fees, admission fees and so on by neglecting the Government schools which not only provide free education but also feed the students under Mid-day Meal Scheme.

However, with the upgradation of Keishamthong Girls’ High School to Keishamthong Government High School as a co-educational model school in 2009, Government schools have regained the lost reputation up to some extent. The school has been successful in producing a few position holders in the HSLC examinations conducted by the Board of Secondary Education Manipur.

Students of the newly upgraded Keishamthong High School made their maiden HSLC appearance in 2010. In the said the examination, Maibam Ashakiran d/o M. Rajendra of Lilong Chajing secured 18th position.

In 2011, Prakash Khundrakpam got 8th position while Meiraba Chirom secured 9th position in 2012 examination. The school authority is hoping that students of this school will occupy a few positions in this year’s HSLC examination as well.

Pleased with the much needed achievement of this school shining like a bright star among the Government schools, Romi Bag Industries, Imphal awarded the school with Rs. 40000 in the year 2010.

Recently, Sisidar Chungkhgam student of this school also won the Science Inspire Award 2012 instituted by the Ministry of Science and Technology, Government of India. President of India, Pranab Mukherji will present the award in a function to be held at New Delhi.

Located at Keishamthong Elangbam Leikai, Imphal West, Keishamthong High School is a Manipur Government’s special category English medium school. The school is being run with 17 teaching staff (13 regular staff, 4 utilised staff), one LDC and one Grade IV. The school has classes from VI to X and the teacher student ratio is 1:40.

As a model school, it has been able to live up to the expectations of the people up to some extent. In the HSLC exam 2010, the school produced 9 first divisioners including one 18th position holder, 12 second divisioners and 11 third divisioners with an excellent pass percentage of 94%.

The Annual Report 2005 of the Board of Secondary Education Manipur available with the Manipur Times indicates that Keishamthong High School had a poor pass percentage record before it had been upgraded to a model school.

The rapid increase of pass percentage and performance of Keishamthong High School has proved that the State Government took a right decision to upgrade a once dilapidated school into a model school.

In the backdrop of success story of Keishamthong High School, the role of the then Education Minister L. Jayantakumar and Director of Education (S), Harekrishna and others cannot be ignored.

Their farsighted planning and day-night struggle were one of the factors that proved successful in materializing the dream of inclusion of Government school students in the elite list of 25 position holders in the HSLC examination which has always been occupied by the private school students for years.

School Headmaster K. Tiken said that the teachers are trying to give the best education to the students. To improve and evaluate the quality of the students, many tests like Assignment Project Practice (APP), Periodic Test, CCE and others are taken. Under Sarva Shiksha Abhiyan (SSA) scheme students reading in class VI to VIII are provided free textbooks and mid-day meal.

As the intake capacity of this school is limited to 200, students applying for admission into this school are selected through lottery system. Students are given free computer class. The school has 40 laptops and 10 desksop computer sets.

Keishamthong High School is now being run under a School Management Committee headed by a Zonal Education Officer.

He said that the main problems being faced by the school are absence of playground, irregular power supply and garbage pit. School management finds it difficult to throw away the leftovers of mid-day meal and other garbage materials since there is no garbage pit. He appealed the Government authority concerned to solve these problems during this academic year.