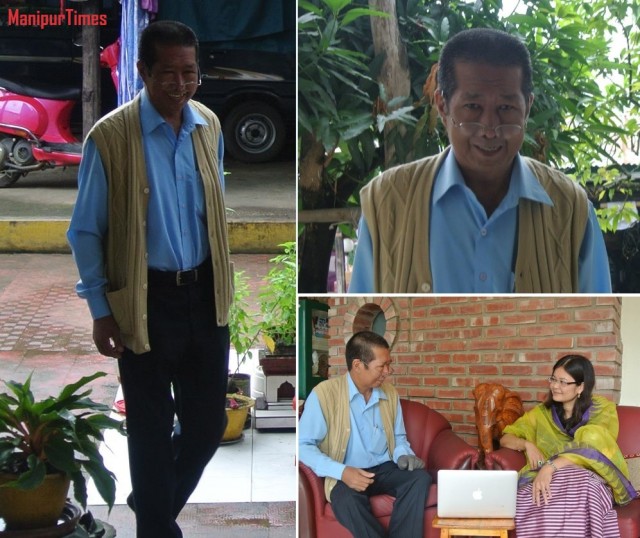 Source: FinadingTheVoices. “Everyone of us are intelligent and 90% of it depend upon our environment” says Khundrakpam Bodhachandra, who is a teacher, a guide and a role model. Bodhachandra was born to a school Head Master, who was renown in basic mathematics hailing from Imphal. But unlike his father he was very weak in Mathematics and he even failed in this subject while he was in his VI Standard. Bodhachandra studied in Little Flower School up to Class V, like a normal pupil his performance was up and down and he was never the best student then. After V Standard his schooling was shifted to Don Bosco, Chingmeirong, where he got failed in Mathematics. “I was fortunate that I passed the other subjects”, he states and laughs at.

Since then he put really serious in his study. He was promoted to next standard and then a changed had been observed in his career. No one in his class-mate was there to beat him in mathematics and he stood either 1stor 2nd position and never been below 3rd position upto X Standard. Even though it was like a shoulder to shoulder war between one of his classmate to acquire the top position and his name is Choudhury, a Bengali student. Bodhachandra reveals that his batch was the first batch to appear Class X Examination conducted by Board of Secondary Education Manipur (BOSEM). In that Board Exam he kept an intense faith that his name should be in top ten list but was not happened so when the result was out. It was very unfortunate, he says. There were three position holders each from his School and Little Flower School and his name was on 26thposition; it was a quite disappointment moment, he regret. At those time no student went for extra tuition or any home tutorial and the performances of the Government Schools were quite competitive for instance Johnstone Higher Secondary School, Churachand Higher Secondary School, Tamphasana or Ibotonsana Girls’ Higher Secondary School. He used to study by his own and sometime guided by his father during his schooling time. Since then mathematics became his passion subject.

Manipur, being a small state, offered very limited options for an academic career to pursue then. There were only few higher secondary schools and colleges. The education pattern was also different; means after class X it was PUC (Pre University Course) and then graduation and so on. Bodhachandra wished to expose more outside the native state for his PUC. He along with a close friend who stood 4th position in Class X Board Exam went to Shillong and studied there at St. Edmund’s College. Even after completion of his PUC (Science), the jolt incident, the unexpected result of class X, still lingered in his mind and he cannot wash it off his mind forever, he added.

In 1975 he enrolled to study B.Tech at Govind Ballabh Pant University of Agriculture & Technology, Pantnagar, U.P. and his specialization was Electrical Engineering. Those five years of B.Tech was a trimester course which happened to be the best part in his life. He was an Athletic champion in his college; he was good not only in education but also in games and sports. During that time he acquired confidence to do something in his life and to become a good person in teaching profession. He was quite ambitious to become a good teacher for which he thought to do M.Tech and pursuing Ph.D.

Bodhachandra revels that he was the only Manipuri student who did M.Tech at IIT Madras at that time. Actually he chose South India to do his higher study as he already spent two years in Shillong and five years in U.P. He really put hard-labour to get admission in IIT Madras and there was no common join entrance test to allocate seats at different IITs. He even gave up sports for it.

From Manipur University to NIEIT

For about two years he stayed jobless, but luck was never away from those who really devote to his study. He got an offer for the post of Assistant Professor in Physics Department, Manipur University at the end of the year 1984. After a long two years of frustration he joined the University on 3rd January 1985. Bodhachandra, being a person of strong determination, impart tuition and kept busy in making something new while he was longing for the opportunity. His innovative idea created an incubation machine for hatching eggs. He work for about 19 years in the University and left it in the year 1998. He decided that he was not suitable for the post as the subject was a pure science; consequently he left his job and shift to somewhere else where Ph.D. is not mandatory. Thus he joined his present institute, NIE&IT (National Institute of Electronics & Information Technology).

The message of work culture

“Let the best be selected” he added, official work should be handled in office only but not at home. Our society needs honesty and competition zeal if we want to move forward.

The funny thing about Bodhachandra is he is a boring person but he read joke books like that of Khuswant Singh and make happy and laugh himself.