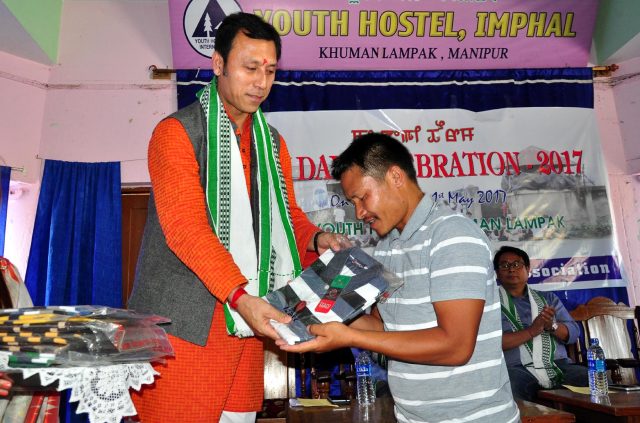 Imphal 1st May, 2017 (DIPR): Honouring the labours, with gifts for their struggle bringing certain change, on the particular day of labours ‘The May Day’, Labour and Employment, Education, Minister Th. Radheshyam said celebration is a chance for oneself to retrospect of how far the conditions of the labours as well as the society has improved in the last 130 years since the struggle of 1880s (1886) in Chicago demanding for the 8 hour work day spreading in India and in Manipur in 1939 (under the leadership of Hijam Irabot Singh). Organised by Consumer Affairs, Food & Public Distribution, Labourers’ Welfare Association under the theme “Securing Decent Work for Sustainable Social – Economic Development” the May Day was observed at Youth Hostel, Khuman Lampak.

Appreciating the celebration of May Day the Minister said, the celebration would have been more impactful if all the labours of Manipur working in all organised and unorganised sectors were brought together under one umbrella at such function. Mentioning the most unfortunate incident of Bhopal gas tragedy, the Minister said the labourers need to be aware of all the welfare schemes of health, social security, education, housing, recreation, water supply, etc., provided by the government for the welfare of labourers of the country. Making an announcement of certain plans to organise a Labour Mela in the state the Minister said, the fair will be organised with an aim to create awareness on the various central schemes for the welfare of labour.

Highlighting the importance of having labour unions the Minister said, unions have to carry out certain needful work for the welfare of the labourer that plays a major role in the progress of society. The main task for such union should be to address the needful and check the implementation of the government schemes of the labour for the upliftment of those whoever belongs to this class of people who are the enforcer of the development progress of the state, the minister added.

Stating the need to set a target for the upliftment of the working conditions of the working class citizen so that the future does not suffer the hardship like today the minister said, all the labours and concern authority need to come together to work together to improve the working condition within the minimum time frame. Thus to achieved the goal the Minister said, proper analysis of the prevailing conditions need to be discussed so that a favourable condition or newly implementation if required for the welfare of the labourer be propagated in the state of Manipur.

In the function Parliamentary Secretary Tourism & IT, Dr. Sapam Ranjan Singh and president and members of CAF&PD, Labourers’ Welfare Association was present at the function. As part of the function the 5th Voluntary Blood Donation Camp was also held sponsored by National Health Mission, Manipur. (DIPR)