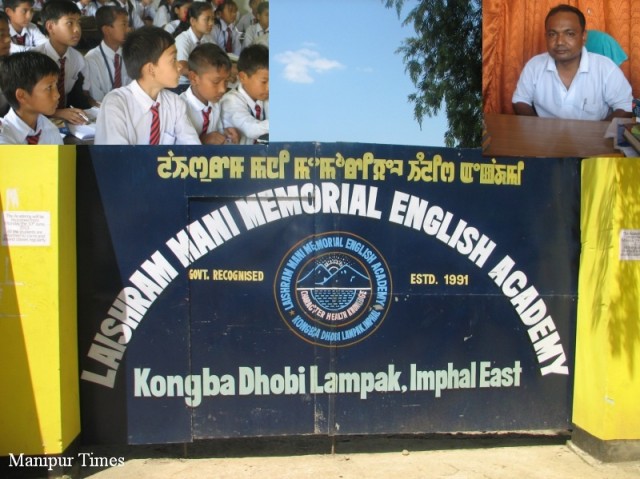 “While literacy rate in Manipur is considerably high, morality seems to be decreasing day by day. Education without morality is good for nothing in society. In our system of education, we are making all out efforts to bring out not only meritorious students but also well-disciplined students. Our school is trying to restore the age-old-tradition of showing respect to teachers by the students. In olden days, students generally showed respect to teachers by way of ‘khurumba’. Now this old tradition is not preserved by anybody. Almost all the students of current generation are lack of moral values and less respect is showed to teachers. The essence of true education is to develop both the morality and bookish knowledge of the students. Our school is working on it”, Oinam Homen, Principal of the Laishram Mani Memorial English Academy told Manipur Times about the approach of his school.

Located at Kongba of Imphal East district, Laishram Mani Memorial English Academy is prominent among private schools in Manipur. The school was established in the month of February, 1991 under the full patronage of Late Laishram Mani Singh of Kwakeithel Moirangpurel, a retired Deputy Director of Agriculture Department.

Formerly known as Christ Reign English School, the school was started with only 30 students having Classes Nursery to Class II only. Later, it was renamed as Laishram Mani Memorial English Academy. Lina Devi was the first Principal of the school. In 1994, the school was upgraded up to Class VIII and got official recognition from Education (S), Government of Manipur. Then it was upgraded up to Class X and got official recognition from Board of Secondary Education Manipur in 2000.

In terms of infrastructure, the school was started with a poor infrastructure – no spacious classrooms and luxurious building etc. Even the teachers of that time who used to get only Rs.500 per month as salary dedicated their one monthly salary to the development of the school. Presently, the school has more than 600 students and 23 teachers. The students are given computer class both practical and theory with the five computer sets the school has.

For improvement of weaker students, measures like extra class, individual attention are given.

The school has discarded the old fashion of canning or physical punishment of students. They are given proper counseling in the presence of their parents. There is a parent teacher association and regular meeting between the teachers and students are held to discuss issues such as how to improve the students.

As an incentive to the students, rank holders in the seasonal examinations of the school are given exemption of half tuition fees. Sometimes, students from the poorest family, destitute children are provided free studentship and scholarship in the school. Regarding school fees, the current rate of tuition fees charged by the school is lower than that of other private schools.

The school is preparing to hold two exhibitions in September 2013. Prizes will be given to the best exhibitors. All the interested students are invited to join the said exhibition, said the principal.