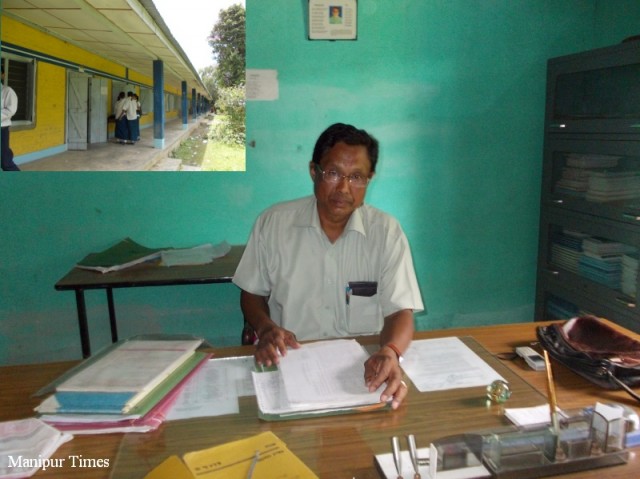 Government schools have not been able to make their mark in the HSLC exam toppers’ list. However, in the recently declared  HSLC exam, 2013 conducted by the Board of Secondary Education of Manipur, Lamding Model High School, was the only government school that figured in the top 25 list by securing the 23rd position.

Nongthombam Khagemba , son of N. Premananda and Ashadevi hailing from Wangbal Mayai Leikai of Thoubal District and a student of Lamding Government Model High School, Wangjing secured himself the 23rd position in the High school Leaving Certificate Examination this year. He brought laurels to his school and all other government schools.  Out of 56 students that appeared, 43 students passed the exam with 13 students securing first division, while 24 secured second division and 5 students secured third division.

Lamding High School which was set up in May, 1958.50 years way ago, the numbers of student who passed the 10th board examination was rare in Wangjing. Many boys and girls from Khongjom and other far flung villages had to walk upto Thoubal for their studies. In view of the disadvantages  faced by the boys and girls regarding studies, some group of social workers of the area thought of a plan to set up a school there.  Some of the prominent founders who struggled to set up the school are  Late Shri Sanasam Udhop Singh of Cherapur,Thokchom Ibocha Singh , Kabram Kesho from Lamding, , Sinam Borajao, MaibamTomba from Cherapur, Sorokhaibam Chourajit from Charangpat, NingombamManao  among others.

According to a wriiten report available with Manipur Times regarding the history of the school, the school, before its building construction, was run at the residence ( Sanggoi) of Khundrakpam Maimu of Lamding Khumanthem Leikai. Later the school was shifted to the sanggoi of  one Yendrembam Themboi of Lamding and the LP school was located at Heinou Makhong of Lamding which was run temporarily as a night school. The school was run under a school managing committee headed by Latesanasam Udhop Singh. Because of lack of qualified teachers in the area, the Founding Chairman of the school committee, Late Sanasam Udhop Singh hired teachers from Imphal. The teachers were brought from Imphal by Udhop’s vehicle. When the class was over, they were then dropped to their homes by him.

One Khulem Jugindro from Naoremthong, Imphal was the first Headmaster of the school.  The building of the school was constructed for the first time at Lamding in 1961. It was a thatched house built with bamboo. With the initiative of the then Territorial Council member Sorokhaibam Chourajit,  who was also the member of school managing committee ,  a meeting of the territorial council was held in July 1961, resolved to recognize Lamding High School as a night school and was approved for grant in aid. The school then turned into a day school since 1963.

The role of every household in Lamding is vital in getting the school to its existence today. Villagers contributed for the school by way of money, rice, bamboo and wood. The newly constructed school was inaugurated by the then Education Director SN Kol in 1964. For the first time, five students of the school passed matriculation under the Assam Board. The school became a full- fledged government school from August 5, 1978.

Achievement of the school so far

So far, this government school has produced at least three position holders, according to a report received by Manipur times from the school. In the HSLC exam 1984 conducted by the Board of Secondary Education Manipur, one student of the school Moirangthem Rameshor who is now a Doctor secured the fifth position., Ningthoujam Sunilkumar of this school secured the eleventh position in the HSLC exam of 1992.  In 2013, Nongthombam Khagemba secured the 23rd position.

At present, about 300 students study in  Lamding Government Model High School in classes VI to X with 24 teaching staffs.

Headmaster Munal said that government schools have not been performing well for a long time and people have lost trust in these schools. Bringing more achievements to regain the public trust is the sole aim of this school. Since the enforcement of Right to Education Act, government is trying to improve the schools under it. Now the parents/guardians are entrusted with the power to look after the school by way of forming school management committees. Children are provided free mid day meal, free  text books and free uniforms. No admission fees are charged. In such a situation, parents, instead of blaming the teachers need to send their children to governmen schools. It is high time that the initiative of the government to improve the schools is encouraged by all. The funds allocated by the government for schools are public money. Parents instead of spending huge money on private schools should enjoy the facility of the Government. When parents and teachers builds up mutual understanding and help each other, government schools will be able to dominate the top elite list of the HSLC exam, which it now seems a quota of the private schools, in future.