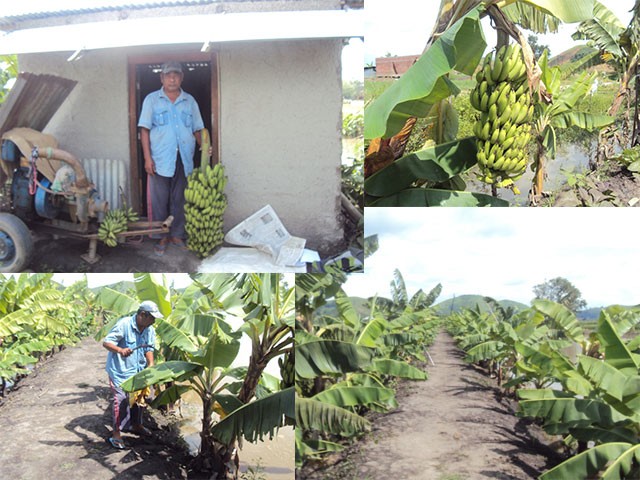 Banana is a vital nutritive fruit item and is widely used in the state as an important item during religious rituals and ceremonies like Lai Haraoba, marriage ceremony, shraddhaceremony, Ningol Chakouba festival. As such, banana plantation can make a thriving business with a comfortable income nowadays. Mutum Naba is a living example, whotookup banana farming successfully in his one acre farm located at Langthabal

MutumNaba Singh (58 years) hailing from LangthabalNingombamMayaiLeikai, Imphal west is successfully taking up a Multi farming where he grows banana tress, rears  fish species. Apart from Banana, other seasonal vegetable items including Pumpkin, Peas, Beans, Cabbage and potatoes are also planted in the farm. He has been running the firm since the month of June, 2012 without any financial grant from the government.

Prior to adopting multi farming, Farmer Naba cultivated Paddy crops. Since his paddy field is located at a low lying area and is prone to frequent floods, the field could not give him good yield as it was destroyed during these floodings. With paddy cultivation in low lying field failing to give him good yield due to frequent flood, he determined to convert the paddy field into a viable farm where he can grow varieties of vegetables including banana, Pumpkin, Cabbage.

Once a Zillaparishad member, Mutum Subaschandra gave him 250 banana saplings of Jahaji variety. Big ponds with a depth of four to five ft were also dug up inside the farm to rear fish varieties. More than 4,000 fish are being reared in his fish firm now, he said.

Soon, the banana saplings started to bear fruits. A banana tree usually gives 20 to 30 bunches of banana. He sells a bunch of banana at Rs. 60-100 at whole sale rate. The bananas are mainly sold to various market places including Khwairamband Keithel, Singjamei, Kongba, Wangoi, Shamurou bazaar. People from his surrounding villages also throng his farm to collect Banana. He can fetch a good income from Banana farming when harvests Bananas twice a year, he said.

When the fish of his farm got matured, he soldthem at the rate of Rs.150 to Rs.300 perkg according to the fish variety. By doing so, he could earn a good turnover of Rs.50,000 to 70,000 a month. For feeding the fish, he uses Cow dung, Maize, Banana leaves, grass, chengkup (rice husk) etc.

Mutum Naba also works as a Male health worker at a local Primary Health centre located at Langthabal Phura Makhong, Imphal West. He is the fourth son among nine siblings of five daughters and four sons born to Late Mutumchaoba and Mutumongbi Amushana. His wife and children also support him to run the farm. With the income earned from the farm, he can maintain his family comfortably.

Naba, apart from developing his economic condition, has been able to generate employment to other villagers by engaging them to nurture the plants and manage the farm

“Compelled by poverty, I could not continue my studies after Class X while helping my poor parents to maintain the family. Instead of attending school, I was engaged in field work. Sometimes, I earned for the family working as a mason , digging ditch as well as collecting fire woods from the hill to meet both ends meal a day. We could not take the necessary meal to our stomach full. Since childhood, my life is full of work and struggles to make a living and the same is still going on”, he recalled.

We could make a comfortable living only when I got a government job as a Male health worker at Primary Health centre, Langthabal Phura Makhong Imphal west in 1980. With the monthly salary, I could support my parents and brothers, he said.

In 1983, he got married with Mutumongbi Bilashini who are blessed with a daughter and a son now.

“The people of the state lack of good work culture.  They like the best food, wear good clothes like the people of developed countries. They never introspect how these developed nations arrived at the present juncture. To make economically self reliant state will be possible only when people cultivate good work culture. Otherwise, we will continue living begging from others”, observed farmer Naba while urging the state government to focus more on encouraging the agro based industries which is highly conducive to state economy growth.