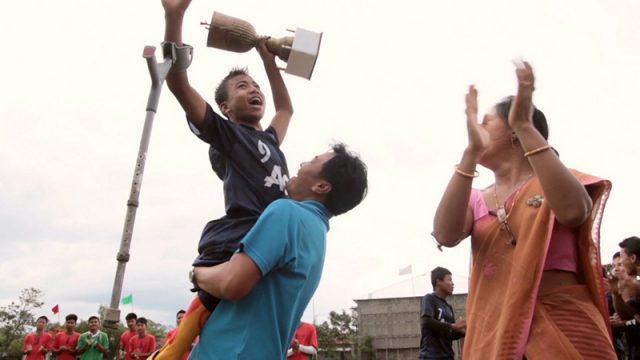 Imphal, September 27, 2017 (DIPR): Eibusu Yaohanbiyu (Let Me Join You) directed by Haorongbam Maipaksana that clinched the Best Regional Feature Film in Manipuri Language in the 63rd National Film Awards 2015 has been officially selected for International Competition at 20th International Children’s Film Festival, India (ICFFI) organized by the Children’s Film Society India (CFSI) under the Ministry of Information and Broadcasting to be held in Hyderabad from November 8-14, 2017.

Eibusu Yaohanbiyu has opened a new chapter of the history of Manipuri cinema for the first Manipuri feature film selected in the International competition section of the prestigious International Children Festival.

Dr. Shravan Kumar, Festival Director of the International Children’s Film Festival India today sent the official invitation to the film maker Maipaksana Haorongbam for attending the screening in the festival.

The film is about the victory of a differently-abled boy’s attempt to join a football team. The story revolves around a football loving physically challenged school boy and his determination to take part in his school football team faces discrimination but ended up scoring the winning goal in the last moments when he replaced an injured team mate in the interschool championship final.

Maipaksana who had completed three years Diploma in Film Editing from Jyoti Chitraban Regional Film and Television Institute, Guwahati has also contributed towards the promotion of modern and folk theatre of Manipur.

It may also be mentioned that Maipaksana Haorongbam is among 40 members of the Preview Committee with Vivek Agnihotri as the Convenor constituted by the Union Ministry of Information and Broadcasting for the International Film Festival of India (IFFI) 2017 to be held in November in Panaji, Goa.

International Children’s Film Festival India popularly known as The Golden Elephant is a biennial festival that strives to bring the most imaginative and delightful international & national children’s cinema to young audiences in India. The festival presents features, shorts, live action and animation films over seven days of festive celebrations attended by more than one hundred thousand children and hundreds of film professionals and eminent guests from around the world.

A selection Committee appointed by CFSI selected the films for the festival.

The International competition section will screen children’s fiction that adheres to globally recognized standards of excellence in filmmaking.

This Asian Panorama competition section will present the best of children’s films from Asia and aims to encourage talented Asian filmmakers who are making high quality, sensitive and entertaining films exclusively for children.

The aim of Little Directors competition section is to encourage children & young people to experiment with the moving image, and stimulate pursuit of film-making both as an art as well as a creative expression of their point of view.