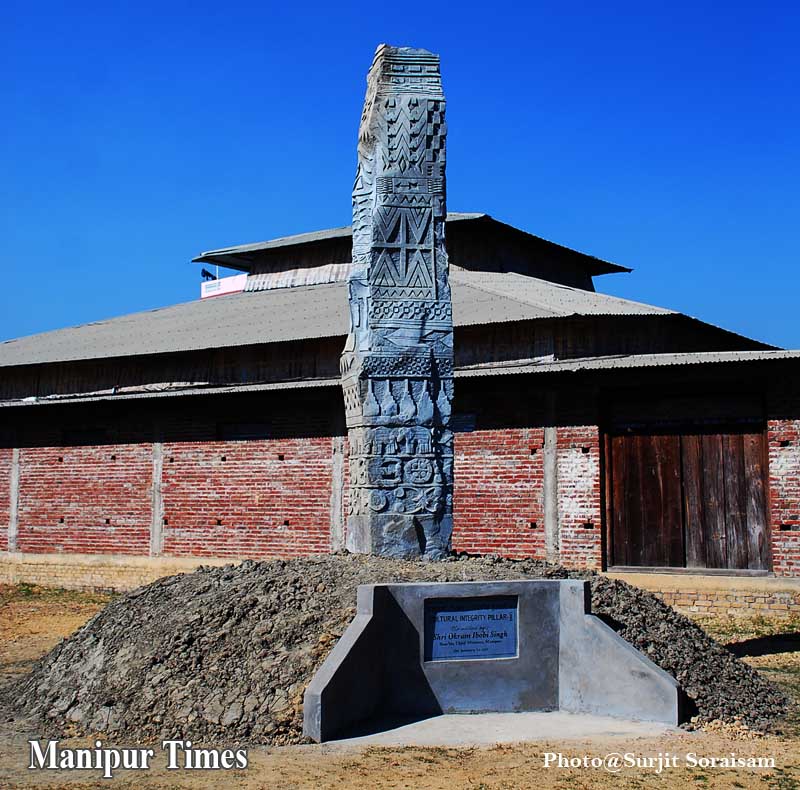 In Manipur, the North Eastern State of India bordering Myanmar, culture and traditions are given prime importance. The Department of Art and Culture, Manipur shoulders the main responsibility of promotion and protection of culture and tradition in this tiny State, which is home to more than 30 ethnic communities.

Construction works for erecting two cultural pillars inside the complex of Art and Culture at Palace Compound have been completed.

It was very interesting to watch the sculptors in action with buzzing sound of the electronic device they work with which they carve the surface of the hard stone and make lines for the desired imprints.

Safety measures like the air tight glasses are seen worn by the sculptors.

The composer sits around the foot of the work site inspecting the careful action. The construction was a fast one with skilled hands. Tools like hammer, brush, and sharp iron rod for bringing the raw stone into the desire shape are being used during the construction.

It is a very rough surface where the sculptors are seen wired around but the mind they have and the artists in them in converting the hard object into something very soothing and meaningful to watch is worth imagining.

According to the officials of the Department, the two cultural pillars are planned to erect in order to showcase the rich cultural heritage of the State to the visitors and preserve the precious historical and cultural elements of Manipur.

Carved motifs of various monuments and objects which have affinity with the history of Manipur are seen in the Pillar built for inauguration at the entrance of the Gate. While the other pillar at the northern side of the Bheigyachandra Open Air Theatre is carved with the traditional textile motifs.

Thongakpa-Thongakpi (watchman-watchwomen), Kanglasha (Mythical Manipuri dragon), Paphal (religious graphics), a Meitei hero, warriors of the tribes of Manipur including Tangkhul and Khongjai tribes, head hunters of the hill tribes, buffalo horns and historical remains of Manipur collected from Thibomei and Kohima etc are depicted on the pillar at the entrance of the Department.

Another pillar has textile motifs of various tribes of Manipur. Some of the motifs which can be mentioned are Khoi, Safi-Lanfi, Moirang Phi Phijin, Mayek Naiba, Leirum, etc.

Twelve artists of different ethnic groups who come from different parts of Manipur attended a 15-day workshop organised between 29th October and 12th November, 2012 before the actual construction of the pillars started.

In the second week of November, Manipur Times interacted with the artists who were engaged in the construction of the pillars.

Senior artist of the construction team, Athokpam Ojendro, 53, an awardee of State Kala Akademi, informed that the height and size of the two cultural pillars are same

Ojendra is a Diploma certificate holder in Fine Arts from Imphal Art College. He has carved a number of sculptures till now.

Different types of sculptures can be made in bronze, concrete, fibre-glass and terracotta. Bronze being the most expensive of all these types. It takes 3 to 6 months to complete a life size statue and cost 10 to 12 times of the same statue made of cement and fibre glass says Ojendro.

A concrete or fibre-glass sculpture cost about Rs One lakh to Rs 1.5 lakh and takes about three months to complete it.

Sculptures can show the concept, rhythm, theme and form in four dimensions. But most of the people in Manipur do not know the value of art. That is why artists of Manipur are facing difficulties in doing art works. The source of income for them is very less. They got the chance to earn money only when there is a workshop or some persons personally request them to make a portrait or any statue.

According to Ojendro the source of income through selling art work is almost impossible in the State. But he expressed hope that after some time when the people realize the value of art the artists would have a better lifestyle and more source of income.

But in Manipur, there is nothing as such and the payment is comparatively very less.

“Asculptor doesn’t have a perennial source of income in Manipur. But his work will be very costly once the artist becomes a famous artist”- he said.

Sorokhaibam Sanju is a State Kala Akademi awardee of the year 2005 for his work “Present Situation of Manipur” which was presented in the form of sculpture.

Earlier, Department of Arts of Culture, Manipur did not have any cultural piece inside its complex which may demonstrate that the Department deals with the activities of culture and tradition.

The design and concept of the cultural pillars ready to be unveiled to the public is composed by Mutua Bahadur, Director Mutua Museum Andro.

The foundations of the pillars are concrete and the bodies are stone. The height of the raw rectangular stone was 18 feet and the breadth measures 2 and half feet.The two stones were brought from Ningthoukhong of Bishnupur district of the State at a cost of Rs 2 lakh.