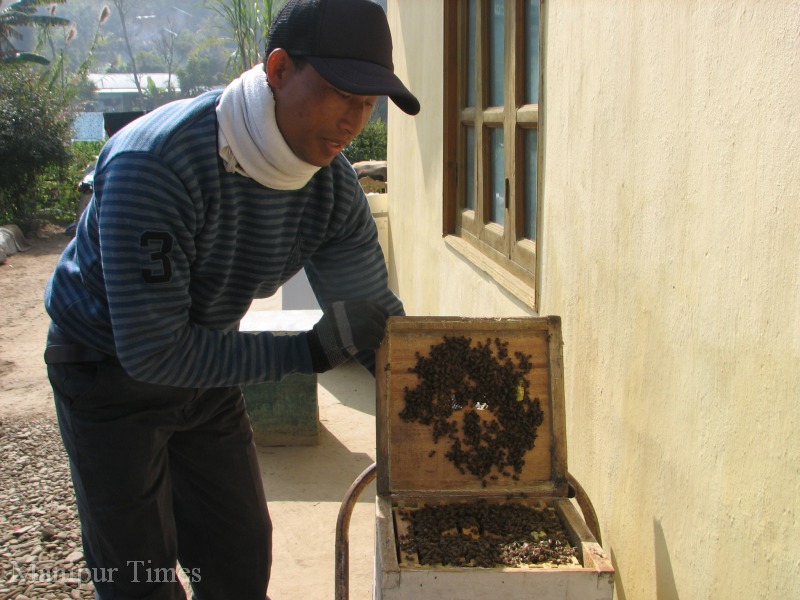 Keisham Meghachandra, 32 of Chanam Sandrok Makha Leikai of Imphal East District is one of the promising beekeepers (Apiarist) in Manipur. He is doing this profession at his home.

He has chosen this as full time profession since the year 2010. At that time he got some bee boxes from Horticulture department through a social worker of the area.

The cost of a litre of honey is 300 rupees in the local market of Manipur. If a bee box produced three litres in 30 days an apiarist can earn at least earn 900 from a bee box. With 6 bee boxes in his bee yard Meghachandra produces about 18 litres of honey a month. But at times he harvests the honey for every 15 days. In such cases the productivity in a month is doubled. So his earning capacity varies from one month to another. On an average he earns not less than Rs. 5400 a month if he harvests only once a month. The amount is doubled when he harvest twice.

Speaking to Manipur times, Keisham Meghachandra said that bee culture is an interesting and lucrative business. One needs toknow the nature and habit of bees while bee keeping. It will be difficult to do bee keeping without proper knowledge.

An Apiarist can harvest at least 3 litres of honey from a bee box containing 7 bee hives. It can be harvested for an interval of every 14-15 days but if the beekeeper harvest it once in a month the quality of honey is better.

Explaining the process of bee keeping Meghachandra said that honey bees move from site to site by swarming. A portion of the bees leave the colony with the old queen and shifted their residence in a new location. The swarming season starts in the month of November-December and ends in May-June.

A bee keeper has to catch the Queen Bee while they swarm and keep her inside the bee box which is made from “Uningthou” or “Tera” wood.

Once the Queen is inside the bee box or hive the worker bees take the responsibility of building their new colonies in different hives. The worker bees use honey that they have stored in their tummies as they left their original hive to make wax (bees wax). They chew up this wax and shape it into a new comb with hexagonal cells.

7/8 bee hives in a bee box are usually there. The queen lays new eggs in this and the new colony starts. She is also regarded as the head of the hive. There will be only one queen in a bee hive if it is single hive. In the case of bee box there will be several hives which is again control by one queen.Drone is the male bee.

Bees produce honey by collecting nectar which is a clear liquid consisting of nearly 80% water, with complex sugars. The collecting bees store the nectar in a second stomach and return to the hive, where worker bees remove the nectar. The worker bees digest the raw nectar for about 30 minutes using enzymes to break up the complex sugars into simpler ones. Raw honey is then spread out in empty honeycomb cells to dry, which reduces the water content to less than 20%. When nectar is being processed, honey bees create a draft through the hive by fanning with their wings. Once dried, the cells of the honeycomb are sealed (capped) with wax to preserve the honey.

Honey bee collects pollen from flowers of different plants like mustard, rice, lotus and other fruits. The worker bees collect it from nearby area and store it in their chambers of the hive. The pollen is mixed with honey or nectar and stored as food(bee bread) in the honeycomb cells.

Once a week Meghachandra cleans the surrounding of bee boxesaround his home and pulls out insect if any.

“If insects move inside the bee hive it is difficult to save the hive. There are particular insects that eat up the honey bee siblings. So we need to keep the surrounding tidy to prevent from insect from attacking the bee hive.” says Meghachandra.

When the cells are filled with honey it is ready to harvest.Harvesting of honey can be started from the third or fourth month once the hive is made. This is in normal case and in rare case there are also hives which cannot be harvested till the completion of one year or even more than that.

Once the hive is filled with honey it will be removed from the box gently. After that the bees which are inside the cells will be vacated using a knife and the flame of a candle. Honey is extracted out from the cells of both sides of the hive to a plate. Finally the hive is kept in a frame inside a utensil to extract honey by shaking motion.