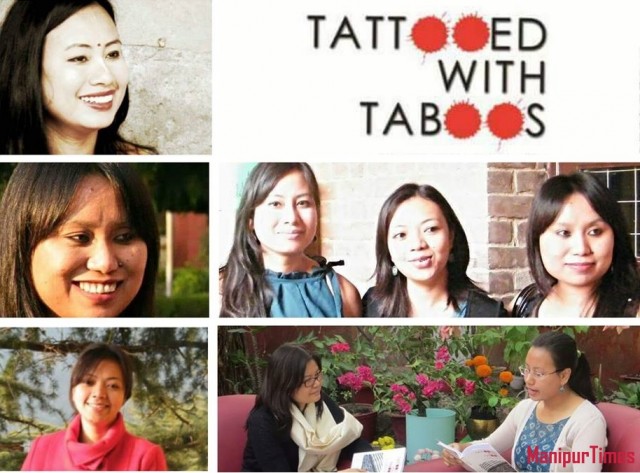 Happiness has no bound when dreams come true. A dream that they never dream of together came alive to pacify the moans of the mother who lost her child, the wife who lost her husband and the maiden who lost her dignity. It is about a book “Tattooed with Taboos”, an anthology, basically poems written by three women – Shreema, Chaoba and Haripriya who emerged from different educational background.

Shreema Ningombam is currently an Assistant Professor in Nambol L. Sanoi College, Manipur. She did her M.A. and completed her M. Phil. in Department of Political Science, University of Delhi in 2009. In the same year she joined Sanoi College. Presently she is pursuing her Ph.D. with a topic on gender studies from Manipur University. Her thesis will focus on the context of women in Manipur.

Chaoba Phuritshabam is a post graduate in Chemistry from Miranda House, Delhi University and an intellectual property professional. She is also pursuing her L.L.B from the Faculty of Law, Delhi University. Chaoba did her schooling up to X Class in a school in her locality and she completed XI and XII Classes at Little Master, MayangImphal.

Soibam Haripriya is a doctoral candidate at the Department of Sociology from University of Delhi, Delhi School of Economics. She completed her M. Phil. from the same department in 2010.

The relation of poem with our society

The poems in the book were consciously developed by the poets with angst of contemporary society which Manipuri women are betrayed time and again. The untold tragic stories of women, in this sorrow land, are narrating through rhythmic beats of words that touch every domain of conflict torn society. The poems are pragmatic as well as reflexive in the sense that they try to reveal and make us feel the artificial devastation which change the frames of our society and practices that pull the society into darkness. The journey of the anthology book starts in the year 2007 when the likeminded authors met in Delhi but sowed the seed of it years back before they knew each other. To Shreema, poetry is a revolt to free self from her feelings of being trapped in this gender constructs anguish of the social norms and the sense of censorship and surveillance in their both private and public life. Poetry is like a rebellion to construct a new moral or a new world of fundamental feminist politics. The idea of poetry, as weaponry to fight for justice, was imprinted on her mind by a verse “thamna Khenjong na wai wai, tharo thambal na hai hum”, a frequently hymn of her illiterate grandmother.

Chaoba Phuritsabam reveals that poem is something like indispensably going side by side to her study and she dreamed of it since her schooling days. Chaoba presume poem as a weapon to acquire freedom which she never enjoyed in our society as a daughter, sister and lover. Women in our society cannot express their own feelings freely and fearlessly, even falling in love needs the consent of a man. Poetry is like an unsung song of ones dreams and desires, when looking into, it reveals the perfect colour of womanhood and tells what a woman aspects from her life. This strongly determined woman felt the beauty of poesy from the Manipuri treasure of poems written by renowned poets and writer like Dr. Kamal and Khoirakpam Chaoba. Her mother who cannot read and write influenced her a lot to exclusively express her (mother) imaginations through her writings.

“Poetry is a part of my life” said Haripriya and she writes and expresses what she feels as a woman. It is crystal clear that women in our society swallowed many sorrows to live within the patriarchy society wherein the needs of women are seldom consider. From her justifying statement it is been expound that she would never written poem if she were a man. There is politics in her poetry and it cannot be apart from her poetic ambiance. Haripriya has certain ambivalence of why should she write for a homeland, in which there is not even an inch of land for her. She got inspired, to express the inner feelings of woman through poetry, by all Manipuri poets for instance, L. Samarendra Singh, Thangkam Ibopishak and Shri Biren etc. for their dedication to poetry.

Journey of publishing the book

The authors of “Tattooed with Taboos” met each other at Delhi by the grace of God. Their friendship went deepen down the heart after knowing the common desire and understanding about the social taboos basically encountered by the Manipuri women. They are all art lovers but it does not mean that they started writing poems, from the day they were intimated, and combine to form a book and will publish away. They never planned ahead to publish a book but often they discussed and talked about poetry, novels, social issues and personal experiences etc. day and night for the long two years. Chaoba even had to escape from her office skip the already pending workloads to make compile their conscious efforts. They did actually start writing much ahead their maiden meeting at Delhi but after their in-depth discussion they developed the idea of publishing their poems, said Shreema.

The book was published with great efforts mainly contributed by Shreema and that also during the economic blockade of 2011. Price of the paper was high but they contributed from their own pockets and available sources without any sponsor. The poems were cross-checked among themselves and finally the book was edited five times by Shreema’s father. The proprietor of Kangla Printers helps a lot to make it possible and fulfill their dreams. Regarding the ISBN, they appreciate Siroi Publication without which their books would stand still in a dark corner of a room. It was a joint venture publication of Siroi publication and Loktakleima publication where the later was founded by the three authors. The cover of the book was designed by Kapil Arambam who proposed nearly 37 designs since the consultation and after 6/7 months of struggling he along with the authors confirmed to use the picture of Thambal Leikhok (Manipuri traditional wrapper) which is significance of woman.

In Meitei society men were not suppose to touch Phanek in front others but on the other side we believe that a piece of mother’s phanek is quite powerful to keep away from evil-spirit. Putting the picture of this Manipuri wrapper on the cover will have many men touching the phanek unconsciously. The four droplets in the topic tells a lot about the women and their taboos. Shreema is the warrior woman who co-ordinate the entire process amidst the uncountable obstacles and hardships on the way of publication.

The book is compilation of three sections. The first section is dealing with women’s desire, repression and fight for emancipation. The poems in this section are with the theme of persistent fight to resurrect the image of woman in our society, which imposed uncountable restrains against women. The title is given as “Tattooed with Taboos”, the name of the book itself. The second section is titled as “Angst for homeland” which tries to interpret how women want to grow out from conflict situation. The never-ending repercussions of conflicts always follow like shadow to this considering weaker section of our patriarchal society. And the last section is about desire and love and so named as “Love and Lovingness”. The central theme of the book is what does it feel to be a woman?

According to Shreema, writing a poem cannot be through systematic, and it cannot be a plan procedure. The central idea of poetry may develop from any action, incident or moment anywhere anytime when you observe it. She further narrates that it is not a wise decision to develop a poem philosophically or arbitrarily. What a poet does is the instant idea is transcribe into rhythmic poetic words only. To convey the right message, what poet wants, to the readers is through perfect word or syllable the poet uses. The perfection of a poem may be endless but we need to put a dot with the perfect and appropriate term. It is technical- where to put the words and how to frame the sentence to convey the right message.

Link to original article of Finding The Voices