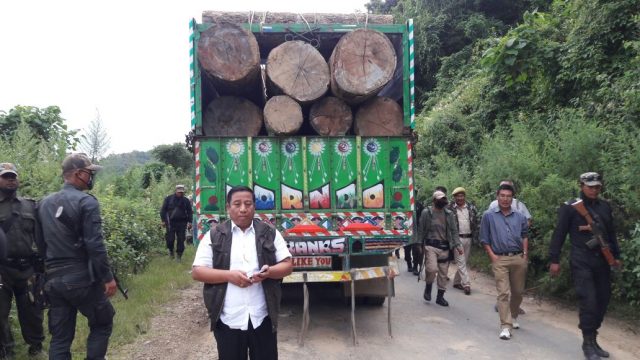 Imphal, September 09, 2017 (DIPR): Forest and Environment Minister Shri Thounaojam Shyamkumar today seized trucks carrying timbers, illegally on Ukhrul-Jessami Road in Ukhrul district.
On way to Kharasom, Minister Th. Shyamkumar intercepted three trucks, loaded with timbers on the Ukhrul-Jessami Road. While checking the papers it was found that the two trucks had no transit pass. Later the trucks were made to pay necessary tax and take the transit pass. Few vechiles flouting traffic rules were also advised to strictly follow traffic guidelines.
Th. Shyamkumar than inspected the trees planted during Vanamohatsava this year at the New Canal Village. The Minister was pleased with the Forest officials as the trees were strictly protected.
Minister Shyamkumar on Thursday (Sept. 6, 2017) had stated that starting from this month, he will inspect trees planted during Vanamohatsava, 2017 by Forest Department, NGOs and other organisations. He also stated that his department aims to grow and protect the trees.